TicWatch E vs S - Are They Really That Different?

Give the below table a little read. We summarized the differences between TicWatch S & E.

You’re looking at two sleek smartwatches. They’re both pitch-black and perfectly circular, making them look expensive. They rock silicone straps. Their bands aren’t thick. This is great as a lot of silicone will make you sweat. What’s good about the material is that it’s super waterproof. It is also durable.

The TicWatch E lets you swap its strap out. Unfortunately, you don’t get this with its Sport counterpart.

Both timepieces have small displays. The E rocks a 1.4 inch (35.5 mm) face. Its counterpart rocks a front the same size too. Thankfully, their displays are not small enough to be hard to read. The fact that their screens are so bright helps – more on this below.

Between the two, you’re getting the same colour choices. Overall, they don’t offer the widest selection. When looking closer, we’d say the Express has a more vibrant ‘lemon’ shade than its brother.

They are both lightweight. However, the Express is lighter than the Sports. It comes in at 1.44 ounces (40.8 grams) – its brother clocks in at 1.6 ounces (45 grams). When it comes to watches, weight matters. You’ll be wearing them for a while, so having your wrist weighed down will be uncomfortable. It’ll especially be bad if their strap is thick – you’d be covered in sweat.

Something you’ll notice about the TicWatch S is that it has a timer on its side – it’s there to make workouts easier. Its strap has a cut-out too. It wasn’t done to spice things up. Moisture is removed better.

If they were bigger, they’d be easier to read. However, you’re met with OLED panels. OLEDs produce some of the most vibrant colours around. Their screens not only pack a punch, but they’re super sharp too. You are getting impressive 400 x 400 P resolutions.

You’re going to be wearing them outdoors a lot. You’ll love that their displays can easily handle glare.

The thing is, we don’t know what the glass on their front is. Many of their competitors come with Sapphire or Gorilla Glass, which are very tough.  We do know that the Express and Sports can handle a beating, though.

The two have fabulous displays. But they are lacking when it comes to battery power. You’re met with 300 mAh batteries. They can last around 2 days with a full charge. This isn’t good, as you’ll have to always carry their magnetic charger with you. Thankfully, it’s slim.

We have some bad news – you don’t get a USB plug. Depending on where you live, it might be pricey to get a hold of it.

To know when to charge the two is easy. There is a battery life indicator. They also come with thorough battery saving modes, and you can drag them for more than 2 days.

You’re not looking at very water-resistant watches. The E & S are IP67 rated. Whatever you do, avoid the pool. They can only handle a couple of splashes. Mobvoi says that such resistance was primarily placed to withstand the rain.

If you remember, you’d know that the TicWatch E and S are excellently waterproof. The silicone on them repels water like its life depends on it. The two are meant to be worn outdoors. What’s great about being water-proof is that not only will water be repelled, but so will other muck – especially mud.

Both devices host Wear OS. It is Android’s operating system designed specifically for smartwatches. It allows for all sorts of things – our favourite is access to Google Assistant. You can also use apps like Spotify, which is great if you’re on a hike.

The Express and Sports are fitness trackers. No surprise, they’re full of features that make exercise better. You get a heart rate sensor, GPS, and step tracker. The GPS on the TicWatch S is supposed to be superior. Mobvoi says that its antenna is built into its strap. When we compared the two, we saw no real difference.

You can sync the devices to the company’s app, helping you track your sleep. As the watches run Android, you can download all sorts of fitness apps off the Play Store.

Now that you know the differences between the two, let’s do a ticwatch comparison with their siblings. 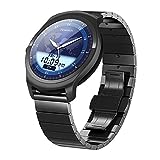 The device looks like its counterparts. It is circular, black, sleek, and also has a silicone strap. Unlike the Express, you can’t swap its strap out. It doesn’t come with a breathable cut-out on its band, like the Sports either. The timepiece is lighter than the S but heavier than the E. It weighs 1.55 ounces (43.9 grams). But it’s the same size. Its display is 1.4 inches (35.5 mm).

In terms of its screen, you’re met with an OLED panel. As you know, it’s very vibrant. The device rocks a screen as sharp as its brothers too.

Something it doesn’t share with them is how water-resistant it is. It is only IP65 rated. If it’s any consolation, as it rocks silicone, it’s super waterproof.

The watch carries a 300 mAh battery. Unfortunately, it doesn’t last as long as its siblings. Many have reported that it dies within a day and a half. To charge it, you’ll be using a charging dock.

It does not run Wear OS. You’re getting Ticwear OS, which is an operating system that’s no longer present. Android is smoother.

You get the same fitness features as the other two. However, its GPS is not as thorough. It is only Glonass while the Express and Sports are GPS, Glonass, BeiDou, and AGPS supported. 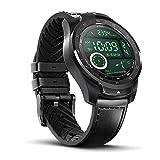 The E and S were released years ago. The Pro 2020 looks newer and chicer – we’re fans. Its strap is a hybrid leather which is the luxurious icing on top.

To begin with, it comes with a superior battery which is 415 mAh. This means that it lasts 2-5 days. There are good power savings modes. With its essential mode activated, the timepiece will last 30 days.

It is more water-resistant than its brothers – it is IP68.

Its screen is OLED, and you already know how great this is. If you’re wondering how big its display is, it’s a familiar size at 1.4 inches (35.5 mm). The screen resolution on it is familiar too. It’s 400 x 400 pixels.

The watch comes with all the tracking features that the Express and Sports have. But it also comes with TicMotion running. This means that it can detect and differentiate running with fast walking. What’s also superb is the fact that you get Google Play.

Yes, it runs Wear OS like the two. Google Assistant will help you whenever you’re in need.

You can download the handy sleep app from the Play Store as well.

Unlike the E & S, we know what the glass on its front is. It is Gorilla Glass 3 which can handle a beating. The cherry on top is it having a cover-glass to prevent smudges.

We think fitness trackers don’t break the bank and do an excellent job at keeping you fit. They don’t come with that many differences. Something very different is the newer TicWatch Pro 2020. We especially love its leather strap – the timepiece looks and feels like a million bucks.

Related Posts
The Ultimate Mens Watch Brand List: 128 Timeless Timepieces
OW Ocean Graph Review: Heritage Diving At Its Finest?
Burei Watch Review: Best Watches by Burei
Martenero Edgemere Reserve: Chic & Functional From New York
Best Benyar Watch: 7 Timepieces You Probably Aren’t Aware Of
Circula Heritage Automatic Review: What to Watch Out For
Vintage Inspired and Definitely Inspiring: The EMG Nemo Diver
NTH Watch Review: Taking Watchmaking to the NTH Degree
Dwiss Watches Review: Hot or Not?
DaLuca Watch Straps Review: Is it Time to Give Credit?
The Ultimate Davosa Watches Review: Are They a High Quality Brand?
Skagen Watch Review – A Scandinavian Wonder?
MVMT Watches Review - Are They The Real MVP?
Ingersoll Watch Review – Quality on a Budget?
August Steiner Review - Fashion on A Budget
Mathey Tissot Review – Should You Work With Them?
Rotary Watch Reviews - Affordable Swiss Beauties
Lucien Piccard Watch Review - Who’s the Former Giant?
Junkers Watch Review - The King of The Sky?
Bertucci Watch Review - The King of The Field
Frederique Constant Watch Review - Classy, Elegant, Good-Looking
Victorinox Watch Review - Who’s Tissot’s Biggest Competitor?
Daniel Wellington Watches Review - Are They Just Pretty?
Laco Watch Reviews - Did We Just Find the Best Pilot Watches?
Tissot Reviews - Swiss Luxury at Affordable Prices
MEGIR WATCH REVIEWS - AN UNFAMILIAR FACE FROM THE EAST
A NIXON WATCH REVIEW - BEAUTIFUL, DIVERSE & SOMEWHAT COSTLY
TIMEX WEEKENDER REVIEW AMERICA’S BEST FIELD WATCH?
An Akribos Watch Review – Who’s the Brand Behind the Mask?
Heritor Watch Review: Modern, Classic Timepieces With A Twist
A Jack Mason Watch Review - Who’s The All American Brand?
The John Wick Watch - What On Earth Did He Wear?
Glycine Combat Sub Review: A Dive Watch For The Connoisseur?
Author
Thomas Vanderlaan
When Thomas Vanderlaan was a child, the moment he learned about mechanical watches he was hooked. His first love being mechanical watches, he decided to pursue a career in engineering as he was entranced by the science behind its gears. As the years passed, his passion grew. Although he worked a hectic career as an automobile engineer, he’d always collect watches during his spare time.
Affiliate links / Images from Amazon Product Advertising API. Wrist Watch Pro is a participant in the Amazon Services LLC Associates Program, an affiliate advertising program designed to provide a means for website owners to earn advertising fees by advertising and linking to amazon (.com, .co.uk, .ca etc) and any other website that may be affiliated with Amazon Service LLC Associates Program. As an Amazon Associate I earn from qualifying purchases.