Stuhrling Tourbillon Review - Are They the Real Deal?

We ran through the Stuhrling 541.334XK1’s specs in the following table. 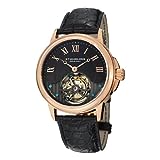 The brand’s Tourbillon line consists of many watches. But it isn’t as large as their other lines. Almost all the timepieces in the collection are reminiscent of each other – they have skeleton dials with leather straps. The 541.334XK1 is one of its many visions in rose-gold. The company says that the gold accents were plated on. They are a whopping 16 K.

Tourbillion watches cost as much as a house. Thankfully, the 541.334XK1 is much cheaper, but it’s still a pricey timepiece – it comes in at over $1000. It looks the price. You can instantly tell it was made from quality materials.

It is not large. Its case stretches 1.65 inches (42 mm) across. We’re fans of watches this size as they’re not too big. They work well with a range of wrist sizes. Its strap is especially thin. If you’ve read our reviews before, you’d know how much of a nuisance thick leather straps are. Your arm would be soaked with sweat.

Not only does it come with a skeleton dial, but its back is exposed too. You get a better view of its gears moving. When bored, peaking at its back is a great way to pass the time.

There are Roman numerals in place. Something you’ll notice is that the lower section of its dial is absent of any markers. This is something seen in Tourbillon watches across the board.

The crystal on its window is strong. You usually see Krysterna in Stuhrling’s devices, but they decided to opt for sapphire. Krysterna is pretty good and the company promises that it gives sapphire a run for its money.

As mentioned, there are Roman numerals throughout, but they’re absent on the lower corner of the dial. You get a gigantic cut-out, showing you the timepiece’s insides instead.

There is no lume on its markers. There isn’t any on its hands either. This is a bummer as Stuhrling’s known to use high-quality pigments. Thankfully, it has bright gold markers that contrast sharply against its black back-drop.

Its crown is quite big. You’ll probably slam it into your wrist.

The gold is plated on its surgical-grade stainless steel body. Not only is the steel super scratch-resistant, but it’s waterproof too. This means water as well as dust, mud and other muck would be repelled.

Its leather strap will feel like a dream on your wrist. It’s genuine alligator skin, so you know you’re picking a pricey timepiece up. It’s a sharp black that contrasts against the rose-gold dial. All the watches in Stuhrling’s Tourbillon collection carry some sort of fancy leather band.

Attached to its strap is a tang-buckle clasp. They’re a bit of a nuisance to work as you loop pins into holes. That being said, the one on the 541.334XK1 is extra secure. If you like, you can swap it out. We would go for a push-button deployant. As its name suggests, it works with the literal push of a button.

The watch is water-resistant up to 165 feet (50 meters). Stuhrling says that recreational swimming is the most it can handle. So, don’t snorkel or scuba dive with it. If you’re a fan of Wrist Watch Pro, you’d know that we regularly advise you to keep leather watches away from the pool. The material soaks up water like a sponge. It’s the exact opposite of water-proof, which the steel on its face is not.

Being a Tourbillon piece, you’re looking at a mechanical watch. Tourbillon timepieces have been around since the 18th century – they revolutionized how accurate mechanical watches could be. Although Stuhrling’s attempt makes it cheaper, $1000 is still a lot.

The specific mechanism inside is the ST-93301. It comes with 18 jewels and a 36-hour power reserve. No, its jewels aren’t real. They are pieces of glass. They’re present to help gears work smoothly. A 36-hour power reserve is impressive. It’s how long your device can last with a single wind.

You might be wondering how they made a Tourbillon piece so cheap. That’s because the mechanism inside of it is Chinese.

Now that you know everything about it, let’s see how its siblings compare.

It comes with a skeleton dial. Like its counterpart, the lower section of its face is opened. There are Roman numerals, but they’re absent in the lower corner. Its cut-out takes a lot of space. Its hour markers are not easy to read. They’re bright blue while its backdrop is grey. They don’t contrast, especially since there’s a pattern to the grey.

There is no luminous pigment on its hands or markers. There is a premium leather strap on it. It’s high-quality alligator skin. After all, the timepiece costs over $1000 (when new).

The black on its strap is very sharp. It contrasts sharply against the blue Roman numerals. There is a tang-buckle clasp that looks identical to the one on the 541.334XK1.

Not only is its front exposed, but so is its back. Similar to its sibling, sapphire crystal is on its window – good luck trying to scratch it. The glass is on its rear too.

It can’t handle that much water. It’s only resistant up to 165 feet (50 meters). If you must get it wet, remember what we said about its strap being a sponge.

The specific movement it hosts is unknown – we don’t know how its power reserve and jewel count is like. But we know that its Tourbillon mechanism is Chinese just like the others in the collection.

The timepiece is a vision in black. It comes in other colours, however the black is our favourite. Its strap is peculiar. You’re getting a material we haven’t seen in many watches before – shark skin. It feels much more expensive than alligator skin. Just like alligator skin, having a lot of it on your wrist is not fun. That’s why it’s great that the 407A’s strap is thin.

The device has a minimalistic face. At a glance, you won’t see the markers on it. Just the large 12 on the top. If you look closer, you’ll see an outer ring with the minutes in an hour. You’ll have to look closely as they’re small. They don’t contrast that sharply against the device’s backdrop either.

You’re looking at a large watch. The Tourbillon’s case stretches 1.73 inches (44 m) across. If you have smaller wrists, it’ll look awkward on you.

Its window is super tough. It’s sapphire, which is the same crystal the 541.334XK1 rocks. Being a fabulous mechanical piece, it’s not surprising to see an exposed back. You’re getting sapphire on its rear too.

Know that the device isn’t super water-resistant. It can only handle 165 feet (50 meters). It comes with luminous pigment on its hands– you wouldn’t expect such a good-looking piece to hold any lume. It is Luminova and it packs a punch.

Like its counterparts, it can only handle 165 feet (50 meters) underwater. It doesn’t come with any lume on its hands or markers. Speaking of its markers, they’re Roman numerals that were printed on.

If you’re wondering what the crystal on its dial is, it is sapphire. Its back is exposed and you see the glass on it too.

In terms of its movement, it is the mechanism we saw in the entry above. It is the ST-93301. It comes with 18 jewel bearings and a 40-hour power reserve.

The collection consists of fabulous devices. They host Tourbillon movements which are seen in the most expensive watches around. Stuhrling’s a brand that is known for their quality. They managed to host the movement inside watches that are the fraction of the price. The Stuhrling Tourbillon price will make your jaw drop. The collection is diverse and consists of very different-looking pieces. They all look like a million bucks, though.

If you’d like to find more steals that look like they cost as much as a house, give our Pinterest a go! We regularly update it with all kinds of lists and reviews.

Related Posts
Stuhrling Watches Review: Who's The Brand Behind The Beauty?
Author
Thomas Vanderlaan
When Thomas Vanderlaan was a child, the moment he learned about mechanical watches he was hooked. His first love being mechanical watches, he decided to pursue a career in engineering as he was entranced by the science behind its gears. As the years passed, his passion grew. Although he worked a hectic career as an automobile engineer, he’d always collect watches during his spare time.
Affiliate links / Images from Amazon Product Advertising API. Wrist Watch Pro is a participant in the Amazon Services LLC Associates Program, an affiliate advertising program designed to provide a means for website owners to earn advertising fees by advertising and linking to amazon (.com, .co.uk, .ca etc) and any other website that may be affiliated with Amazon Service LLC Associates Program. As an Amazon Associate I earn from qualifying purchases.