The skx009 is a watch that’s very sought after.

If you want to know if it’s worth your money you’ve come to the right place.

We’ll be running through everything you need to know about it. And once we’re done, we’ll be going through some of the best alternatives.

Before we dive in, let’s go through the watch quickly:

No one likes a heavy watch. There’s a fine line between a premium heft and a flat out wrist work out. Unfortunately, this line is crossed with the Seiko pepsi diver (skx009). It is noticeably heavy as it’s a little over 7 ounces (198 g).

You’ll never have to worry about replacing its battery. The SKX009 is an automatic watch. Not only does this save you money, but the fact that it moves with you is very cool.

As you know, it’s compulsory that you always have automatic watches on. This is the case with the SKX009 as well. It has a 40-hour reserve, so it can only last 2 days of not being worn.

If you don’t wear it very often, you’ll have to buy a winder. The watch doesn’t come with a hand-winding feature, so this is an added expense.

As it is automatic, you have to be very careful of your surroundings. If you’re too close to a magnet, you could totally disrupt the watch's gears. The magnet doesn’t have to be that strong, as long as it’s near the watch, its gears are in harm’s way.

The watch is pretty eye-catching. The first thing you’ll see is its red and blue bezel. The colours contrast against the stainless steel body of the watch.

If you take a closer look at it, you’ll notice it’s matte. The stainless steel plates have been brushed to get rid of glare that may hurt your eyes.

This is especially important near pools as water can reflect quite a bit of light.

Typically, a watch’s crown is placed at the 3 o'clock position. SKX009 sticks with SKX’s signature feature, having its crown at 4 o’clock. If you’re a watch enthusiast, you will find this interesting.

According to Seiko, there is a reason for this placement. Being placed at 4 o’clock, you’re less likely to jam your hand into the crown; we’re all guilty of this, unfortunately.

Its hands are quite cool. They’re noticeably pointy and better looking than many watches that have tapered hands.

If you buy the SKX009, you’ll have a stainless steel strap. This gives it a formal flair as you can take the watch with you to formal functions.

If you’re an avid swimmer, the version made from rubber may be the best. That being said, the stainless steel plates are equally great for water use as they won’t corrode away.

If you’re lazy, a stainless steel strap isn’t a great commitment. You’ll have to maintain it well. So expect to wipe its plates down often.

Every dive watch needs to have a heavy-duty display. This is the case with the SKX009 as well.

It’s made from a Hardlex Crystal display. The display makes it hard for scratches to occur. However, Hardlex isn't the most heavy-duty material out there.So if you do drop it, you can create quite a dent.

Not only is its display pretty scratch-resistant, but it’s great for outdoor use.

Hardlex Crystal is nonreflective so you can easily view your watch in the sunniest conditions. For an everyday user, this is an added benefit, especially if you have bad eyesight.

Although it can easily be worn as a dress watch, at the end of the day it was made for diving. With it by your side, you can expect to go up to 660 feet (200 m) underwater.

It can perform such a feat because of its build. Its Hardlex crystal display helps keep up with water pressure, and its stainless steel body doesn’t give into corrosion.

These aren’t the only things that make it suited for diving. The SKX009’s crown is screwed down and much of the body is sealed off as well.

Because of this, the watch is ISO-6425 certified.

That being said, you can easily damage the watch. If you meddle with its crown underwater, you’ve drastically increased the chances of water seeping inside.

What’s more, Seiko advises that you give its crown a regular cleaning. This reduces the risk of it losing its flexibility.

Its bezel is something you won’t always come across. This is due to its design. Not only is it very appealing, but it’s highly functional.

The red portion of the color pattern is purposefully placed between the 0-20 minute mark. If you’re a diver, you know that this is the danger zone, so you should steer clear.

The bezel reads up to 60 minutes, moving with a ratchet mechanism. So you can hear every tick, helping you sort out how you’re going to deal with your oxygen supply.

Being a watch enthusiast, you know how great Seiko’s lume is. With the SKX009, it uses LumeBrite paint.

The paint is scattered across the display. It's all over the watch's hands and indices. A touch of it has been added on the bezel as well, making it look better.

Its lume is very beneficial. In a dark room, it’ll shine at full power for up to 5 hours. If you’re not aware, this is 10x more than the regular amount.

Of course, you need to expose the watch to sunlight regularly. Anything over 500 lumes will do the trick, charging the paint up.

Even without the lume its display is easy to read. Its indices are large and in white, which contrasts the dark blue background.

Such luminosity makes the watch perfect for diving. Of course, it works well if you’re out in the dark too.

As you can see, the SKX009 is a pretty great watch. That being said, there are many that give it a run for its money. Many of these are sibling watches from the SKX line. 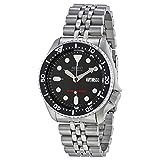 Being the SKX009’s sibling, how will it fair?

The SKX007 is different from the SKX009 in terms of appearance. It doesn’t have an appealing Pepsi look, instead, it has a black bezel. To some, this may be a better trade-off as it’s classier, but to many (including myself) it’s not. What’s more, the watch has its crown at the 4 o’clock position. This is specific to the SKX line.

Its case is stainless steel like its strap. (If you want, you can swap out its steel band for a rubber strap).

Of course, it’s automatic as well. Sadly, the watch doesn’t have a hand-winding feature as the SKX009 does.

The SKX007 will travel with you up to 660 feet (200 m) underwater if you’re wondering. The bezel runs up to 60 minutes, having markings every 10 minutes until the 60 minutes are reached. The bezel also moves with a ratchet mechanism to help you track yourself better. 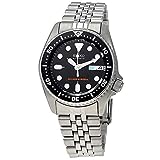 Another sibling, it goes head-to-head with the SKX009:

Both the SKX007 and SKX009 are 42 mm in diameter. This isn’t the case with the SKX013 as it’s only 37mm across. Its display is black and so is its dial. This is complementary to the stainless steel strap.And no, there’s no Pepsi bezel.

The case is noticeably thick. It’s on the chunkier side with a stainless steel body.

The SKX013 is automatic. Unfortunately for us, it doesn’t come with a hand-winding feature or hacking.

It can withstand up to 660 feet (200 m) underwater and comes with a durable display. It's a Hardlex crystal that prevents a magnitude of scratches.

Its crown is screwed at 4 o’clock (as expected with an SKX watch) and like any Seiko diving watch, you’re not supposed to play with its crown while submerged.

The crown is also screwed at 4 o’clock (as expected) and with any Seiko diving watch, you’re not supposed to play with its crown while submerged.

No, the Orient isn’t from the SKX line. Instead, it’s a product by Orient that gives the SKX009 the most serious competition from the watches on this list.

Its whole body is stainless steel, being surgical grade.

The watch is automatic. If you don’t use the watch for prolonged periods, you don’t have to fear. There’s a hand-winding feature at your disposal.

It’s a good diving companion. It can last up to 660 feet underwater. Because of this, it has a tightly screwed-down crown and its bezel is unidirectional.
Its bezel also has markings up to 60 minutes, with indications for every 10 minutes. Oddly, it’s almost the same weight as the SKX009. The Ray II comes in at 6 ounces (170 g). 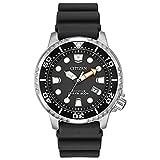 With the Eco-Drive Promaster, you’re getting a superb dive watch:

Like many of the watches discussed so far, the Promaster does not have the Pepsi Bezel. This means it doesn’t look much like the SKX009.

Unlike the SKX009, the citizen is not automatic. It’s powered by solar energy. This makes it similar to the SKX009 as they both don’t have a battery.

The watch shares good luminosity with its counterpart. Its hands, as well as indices, are painted with luminous paint. If you take a closer look at its display, you’ll see it doesn’t have any numbers but has markings as the SKX does.

Its band is not stainless steel. Instead, you’ll have to expect a polyurethane strap. In terms of water resistance, the Citizen is able to reach 660 feet (200 m) underwater.

With that being said, it’s easy to see why the SKX009 is so sought after. Although it’s very much in demand, there are alternatives available, especially in the SKX line.

The best contenders are:

Related Posts
Seiko SKX175 vs SKX009 – Are They Really That Similar?
Seiko SNK805 Review – Does Beauty Matter?
Seiko SARY057 Review - Seiko’s Very Best
Seiko 55 Fathoms - A Fabulous Dupe
Seiko SNK807 Review - Reliable & Rugged
Seiko SKX175 Review - A Look at Japanese Excellence!
Seiko Sea Urchin - A Complete Watch Review
What’s The Best Seiko Watch? 8 Watches You Need In Your Life
Seiko Vs Citizen: Two Excellent Japanese Watchmakers Compared
Seiko Field Watch Review - Who’s the Best?
A Fight Between Brothers- A Seiko SKX007 VS SKX009 Review
Seiko Tank Watch Review – Say Hello To The Best Tank Homages
Seiko Skx013 Review – A Look At Seiko’s Best Dive Watch?
Seiko Sumo Review - Who’s the New Kid in Town?
SKX173 vs SKX007 - (Almost) Identical Twins
Seiko SNK809 - Chic & Functional
Seiko Aliens Watch - What Were the Futuristic Pieces?
Seiko Sarb035 Review: A Collector's Favorite & Modern Classic
Seiko Digiborg Review - 007’s Timepiece
SKX173 - A Complete Run Down
SKX007 vs SKX013 - A Complete Watch Review
The Seiko Flightmaster SNA411 - A Pilot's Life For Me
Seiko Baby Tuna - A Complete Watch Review
Author
Thomas Vanderlaan
When Thomas Vanderlaan was a child, the moment he learned about mechanical watches he was hooked. His first love being mechanical watches, he decided to pursue a career in engineering as he was entranced by the science behind its gears. As the years passed, his passion grew. Although he worked a hectic career as an automobile engineer, he’d always collect watches during his spare time.
Affiliate links / Images from Amazon Product Advertising API. Wrist Watch Pro is a participant in the Amazon Services LLC Associates Program, an affiliate advertising program designed to provide a means for website owners to earn advertising fees by advertising and linking to amazon (.com, .co.uk, .ca etc) and any other website that may be affiliated with Amazon Service LLC Associates Program. As an Amazon Associate I earn from qualifying purchases.