The SKX007 vs SKX0013 is a very popular discussion in the watch world. That’s why we’ll be making them face-off, to see which is the best watch to own.

Before we dive in, it’s only right that we go through what they have to offer, objectively.

So, let’s look at this table:
Preview
SKX007 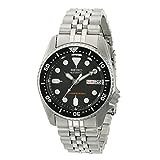 Both the watches are automatic. The SKX007 comes with the 7s26 movement. This is the case with the SKX013 as well.

Because of this, neither of them comes with hacking or a self-winder, unfortunately.

As they share the 7S26, the watches come with a day and date function. So you can always stay on top of your schedule.

In terms of movement, you’ll be wrong to think this is where the similarities end. The SKX007 and the SKX013 both have 21 jewels inside them. This helps the gears move as smoothly as possible.

All in all, their movement is identical (as you can see). This is emphasized by the fact that they run at 6 beats per second.

They’re both dive watches. You can take both SKX watches up to 660 feet (200 m) underwater. Although this is a dive watch, such depths are perfect for scuba diving.

You’ll be happy to know that the SKX007 has been ISO certified. It’s marked as ISO 6425 which means it’s the real deal.

In terms of the SKX013, it’s also ISO certified. Unfortunately, Seiko hasn’t made the standard public knowledge. As it’s so similar to the SKX007, it’s safe to assume it’s also ISO 6425.

A unidirectional bezel is a must for dive watches. Thankfully, such a thing is guaranteed with the SKX013 and the SKX007 by your side. In fact, they both have 120 clicks which makes it easy for you to track where you are.

What’s more, a chamfer runs across the end of the bezel on both watches. It’s polished, making the watch look more premium than it actually is.

The dial is made of Hardlex Crystal in the SKX007. This is also the case for the SKX013. You shouldn’t be surprised by this as Hardlex is Seiko’s go-to material.

With the mineral window, you can expect the watch to take quite a beating. Yes, it’ll keep scruffs away easily but it can also be shattered. After all, it’s not sapphire.

With one look at the dials, you’ll notice how big the hands are. This is the case for the circles that replace the Arabic numerals as well. Although they’re on the larger side, the displays are not busy like other watches we’ve seen.

You’ll notice that there is no 3 o’clock on them. Instead, the calendar feature is present.

They are white while the display is black. Technically, it’s ‘black’ but it looks more like a dark grey. Anyway, this allows for a pop of colour.

The bright orange ‘divers 200 m’ is also colourful, which we weren’t expecting. It’s located at the bottom of the display.

As the markings are so big, they do a good job of illuminating the display. They allow the LumiBrite to shine brightly. If you didn’t know, LumiBrite is a very luminous paint. It can last up to 5 hours before dimming.

Before you get too excited, you’ll have to expose it to sunlight often as it recharges this way.

Their hands are identical too. You could go the extra mile and say that the SKX013’s is more refined, but this is not obvious.

Seiko loves making thick watches. Both the SKX007 and the SKX013 are 0.5 inches (13 mm) from top to bottom. Although this can be bothersome, it won’t strain your wrists.

This is especially true considering the thickness needed to make the watch waterproof.

Speaking of size, you may be wondering how big the SKX007 is.

As you can imagine, they’re both made from stainless steel. This is the same for the bezel as well. You can see that the material is used in the strap too.

Although they come with a stainless steel bracelet, they both have models that come with rubber straps. This is especially the case with the SKX007.

It’s quite clear that both watches are identical. They only differ when it comes to minor details.

If you like what you see but want more options, read ahead. We’ll be running through some alternatives.

Seiko Men's SKX173 Stainless Steel and Black Polyurethane Automatic Dive Watch
Buy on Amazon
The SKX173 and the SKX007 are brothers. As they’re so similar, they can be compared to the 013 as well. So, let’s see how it fares against the two:
Movement
It utilizes the same 7S26 automatic movement found in the SKX013 and SKX007. Because of this, it comes with a day and date function which is pretty handy.
As it has the 7S26, you don’t get a hand winder or a hacking feature.
If you’re wondering, it has a power reserve of 40 hours, which is similar.
Case
In all three watches, their cases are identical. They’re all made of stainless steel.
The SKX173’s bezel looks a lot like the 013 and 007. Its chamfered, coming with a polished finish.
The watch is 1.61 inches (41 mm) across. Although not the smallest, it’s smaller compared to the SKX013.
Water Resistance
Similar to the SKX007, the watch is ISO certified.
The watch is ISO 6425. Although great, this isn’t anything to write home about. This seems to be the norm with most of Seiko’s mid-upper mid-range dive watches.
The SKX173 can travel with you up to 660 feet (200 m) underwater. Its Lumbrite display along with rotating bezel helps with this.
All of these features are present in the SKX007 and 013 as well.
Dial
The dial is made from Seiko’s Hardlex Crystal. All in all, the insides similar, but not identical to the SKX013 and SKX007.
Arabic numerals are not present in the SKX173. Instead of large circular markings, they’re rectangular. A calendar in the 3 o’clock position can be seen here too.
What’s more:
The ‘divers 200 m’ is in red, not orange. 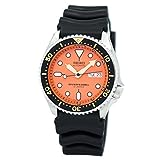 JAPAN Mens Analog Sport Automatic Seiko Watch SKX011J1
Buy on Amazon
Another watch from the SKX line. We think it’s a great alternative.
Movement
It is an automatic watch. It comes with the JS26 movement. Hence, it’s the same as the other two, having no winding or hacking features.
As it comes with the JS26, you’ll see a day and date function. Like its counterparts, this replaces the 3 o’clock numeral.
You should know that it has 21 jewels inside it, helping its gears move smoothly.
Water Resistance
Its luminosity will help with deep dives. It comes with LumiBrite so your watch will glow when the lights go out.
As discussed above, the pigment is very sensitive and is one of the best luminous paints out there.
The SKX011 can last 660 feet (200 m) underwater.
Its screwed-down case will help with this. Now, we haven’t talked about a screwed-down case before, but the SKX013 and SKX007 have this as well. It prevents water from seeping in through the back.
Dial
The display looks very different from the SKX013 and SKX007. This is refreshing.
Well:
Its display is orange. This is a sharp difference to the deep grey we’ve seen in the other two.
This time, the ‘divers 200 m’ is in black. This contrasts with the brightness of the yellow in the bezel.
The differences end here. All three of them have large indentations, a Hardlex Crystal mirror and a calendar feature replacing the 3 o’clock position.
Case
The case is made from stainless steel. This is the case for the bezel as well. The bezel is completely black with its markings in bright yellow.
The bezel rotates. It has 120 clicks, so you track yourself underwater.
Yes, it’s 1.69 inches (43 mm) across. This is almost identical to the SKX013, especially since it’s 0.5 inches (13 mm) thick. 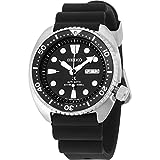 New Seiko SRP777 Prospex Automatic Black Rubber Strap Diver's Men's Watch
Buy on Amazon
Well, here is a watch that’s not from the SKX line. How will it do?
Movement
It’s an automatic watch. That being said, it doesn’t have the 7S26 movement. Instead, it functions with the 4R36.
Because of this difference, the watch has a winder and lets you hack it. If you don’t know what hacking is, it’s when you adjust the watch’s hands to make the time more accurate.
Unlike the other two, it comes with a 40-hour power reserve. In terms of jewels, there are 21 of them inside, similar to the SKX007 and SKX0013.
Water Resistance
In terms of resistance, this is where the differences end. The Seiko Turtle has the standard 660 feet (200 m) we’ve seen so far.
You’ll notice that its strap is rubber. This is great as personally, I think rubber is a better material for diving. It’s easier to take care of than stainless steel. If you’re not a fan of this, you can get a model that has a stainless steel strap.
Dial
Well, the dial is identical to the other two. If you pair them together you won’t be able to tell the difference between the Turtle, 013 and 007.
The only thing that gives the Seiko Turtle away is the wording of the ‘Divers 200 m’. Instead of bright orange, it’s white.
The size of the circular markings is the same, even the removal of the 3 o’clock for the calendar feature.
Of course, you may be wondering what type of window it has. It’s none other than Seiko’s favorite Hardlex Crystal.
Case
The case is stainless steel, no surprises here. The stainless steel is also in the bezel. If you look closer at it, you’ll notice that it’s grooved like the 2 SKX watches. In fact, it’s polished as well.

As you can see, the SKX007 and SKX013 are pretty much identical. They are very similar in the following areas:

When you compare them with other alternatives, they’re similar to those as well. The only watch that was slightly different was the Seiko Turtle.

All in all, they’re both great watches for you to spend your money on, but if we had to pick one, the SKX007 is better as it offers the same features that the SKX0013 does for a lesser price.
So, what do you think? Did we miss something? Tell us below!