If you’re interested in minimalistic watches, you’ve probably heard of Skagen before. The brand is owned by Fossil and produces some super chic units. In our Skagen watch review, we not only took a closer look at the company, but we talked about several of its best pieces too.

It produces fashion watches. You might have heard of Bauhaus pieces before – Skagen’s watches utilize the same minimalistic design.

The company was formed by a couple in New York City. They wanted to create watches inspired by their time in Denmark.

Skagen produces watches that are of good quality. They’re not expensive either. Unfortunately, the brand is not very popular – it has been around for more than a decade, though.

By 2012, it became a part of the Fossil Group. Under its wing, its growth has consistently been rising.

We summarized the most notable entries in the following table. 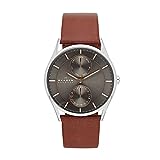 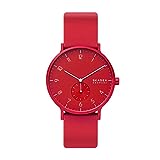 It is a perfect size; its case stretches 1.65 inches (42 mm) across. You’re looking at a unit made completely from polished stainless steel. This helps it look and feel expensive. Its metal strap has a plethora of tiny holes – so air will move through, and prevent your wrists from getting sweaty.

If you have bad eyesight, reading the SKW6501 might be tough. Its hour markers blend in with the dial; they are the same colour. The time is written in the 12-hour format, in Arabic numerals.

You don’t have to look closely to notice its two subdials. One of them reads the seconds passed, and the other can be used to tell the time in a different time zone.

What makes the device look ultra-chic is the sandblasting on the bottom of its dial. It’ll catch your eye from across the room.

What’s the glass on its display? The mineral type. It can handle a beating. However, it’s not the best out there. That title goes to sapphire.

The Krisoffer is water-resistant up to 165 feet (50 meters). What can you do with such a rating? Brief periods of recreational swimming are possible. Whatever you do, don’t think about scuba-diving.

Inside it is a quartz movement. Skagen hasn’t made it public what the specific caliber of the mechanism is. But it moves like butter.

The cherry on top is the fact that it’ll fit comfortably on your wrists. It comes in at 2.8 ounces, so it’s a featherweight.

Let’s talk about its strap. You’re getting a fold-over deployant one. Once it’s on your wrist, you don’t have to worry about the timepiece going anywhere. 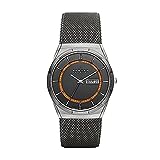 The SKW6007 is a vision in grey. Like its sibling above, it was made fully from stainless steel. The timepiece also has several holes on its bracelet. So there’ll be fresh air coming in.

It looks good as it rocks an oyster case. You can generally see the case on more expensive watches.

You’re looking at a small timepiece. Its case stretches 1.53 inches (39 mm) across. Just because it’s small doesn’t mean you won’t be able to wear it if you have larger wrists, though. It just might not suit you.

Its face looks sporty. There is an inner ring with the minutes, and outside, there are rectangular markers for the hours.

You’ll always be on top of your schedule with the SKW6007. It has a calendar with the day and the date. It’s in the 3 o'clock angle, so you won’t be straining your neck. The day and date are in large font that is bolded well.

There is a mineral display – don’t get too rough with it.

A quartz mechanism was housed. Once again, Skagen hasn’t released details about its caliber. That being said, it’s pretty buttery.

Can you hit the pool with it? Yes. The timepiece has a resistance rating of 165 feet (50 meters).

The day and date feature.

Unlike its siblings, it’s not fully made from steel. The SKW6086 has a genuine leather band. It’s thin, so you won’t have sweaty wrists. It rocks a burgundy strap. But if you want, you can interchange it with any band of your choice.

The Holst is not very big. Its case stretches 1.52 inches (40 mm) across. You’ll notice that its dial shimmers in dim settings. That’s because there’s a sunray effect.

There are two sub-dials on its display – they are on the top and bottom. They are its calendars.

There are no Arabic numerals in place. Instead, you’re getting rectangular markers filled with lume. There is pigment on its hands too. Unfortunately, the lume isn’t very bright.

What is its crystal made of? It comes with mineral glass. You’re aware of how durable it is. Just like its counterparts, there is a quartz movement inside.

You can swim with it; its water resistance rating is 165 feet (50 meters).

You might not want to get it wet. If you’ve read our reviews before, you’d know how “anti-waterproof” leather is. Once wet, it takes a while to dry as well.

From the three discussed, it is the lightest timepiece. It weighs 1.52 ounces.

As it rocks a leather band, it’s no surprise that you’re not getting a deployant clasp. A tang buckle one is present. It’s secure. However, maneuvering it might take more work as you have to latch a pin into a hole.

You won’t see a watch as eye-catching as this one. Its whole body is bright red, but you can also pick it up in other shades. There are yellow, blue, and green variants. We think the red is the best looking, though.

Due to the colour, it has a sports-car feel. There’s a matte coating on its body, giving it a more elegant feel.

It’s not fully made from metal. It has a silicone band. It’s not thick, so sweat won’t collect. The material is waterproof so all kinds of muck and dirt will fling off easily.

The SKW6512 is a perfectly sized unit. You’re getting a case that stretches 1.61 inches (41 mm) across. The glass on its front is made from mineral. Be careful to not dent it.

You’ll be able to read it easily as its dial is wide. There are large Arabic numerals present in the 12-hour format. You’ll notice a sub-dial towards the 6 o’clock position. It reads the time in another time-zone.

Although it's waterproof, you can’t swim with it. Its resistance rating is 100 feet (30 meters). A couple of splashes is all it’ll be able to handle.

Just like the rest, a quartz movement was placed. The watch comes with a mineral display as well.

It doesn’t have a deployant clasp. Instead, a tang buckle is available.

Let’s talk about how much it weighs. You’re looking at a 1.4-ounce timepiece. When it’s on your wrist, won’t even feel it there.

Now that you know what the best Skagen watches are, let’s take a closer look at the brand.

Where Are Skagen Watches Made?

Many believe that the company’s pieces are made in Denmark – after all, its name is Skagen Denmark. This is not the case, however, as they were first manufactured in Hong Kong. After Fossil acquired the company, manufacturing took place in mainland China.

When you’re purchasing from Skagen, you’re sure to get good quality pieces. However, the company doesn’t have the best reputation.

It’s not bad, but it’s a part of the fashion watch industry. Watch snobs look down on fashion brands because they focus on looks over functionality.

If you want to gauge the company’s reputation, know that it’s a direct competitor to MVMT and Daniel Wellington.

Are Their Watches Good?

We mentioned how we think Skagen’s pieces are good. But let’s dive into this in-depth.

Skagen has won several awards for its designs. This includes the prestigious Red Dot award.

Although most of its watches are Japanese, you’ll find more expensive pieces with high-quality Swiss parts that work like a dream.

When purchasing its devices, you’ll get 2-year warranties. Any manufacturing defects and materials are covered. Upon inspection by Skagen, you might get a replacement or have your watch repaired for free.

What do we think of the brand? We think it offers some superb looking timepieces. They are great in quality and quite affordable as well.

Related Posts
The Ultimate Mens Watch Brand List: 128 Timeless Timepieces
OW Ocean Graph Review: Heritage Diving At Its Finest?
Burei Watch Review: Best Watches by Burei
Martenero Edgemere Reserve: Chic & Functional From New York
Best Benyar Watch: 7 Timepieces You Probably Aren’t Aware Of
Circula Heritage Automatic Review: What to Watch Out For
Vintage Inspired and Definitely Inspiring: The EMG Nemo Diver
NTH Watch Review: Taking Watchmaking to the NTH Degree
Dwiss Watches Review: Hot or Not?
DaLuca Watch Straps Review: Is it Time to Give Credit?
The Ultimate Davosa Watches Review: Are They a High Quality Brand?
MVMT Watches Review - Are They The Real MVP?
Ingersoll Watch Review – Quality on a Budget?
August Steiner Review - Fashion on A Budget
Mathey Tissot Review – Should You Work With Them?
Rotary Watch Reviews - Affordable Swiss Beauties
Lucien Piccard Watch Review - Who’s the Former Giant?
Junkers Watch Review - The King of The Sky?
Bertucci Watch Review - The King of The Field
Frederique Constant Watch Review - Classy, Elegant, Good-Looking
Victorinox Watch Review - Who’s Tissot’s Biggest Competitor?
Daniel Wellington Watches Review - Are They Just Pretty?
TicWatch E vs S - Are They Really That Different?
Laco Watch Reviews - Did We Just Find the Best Pilot Watches?
Tissot Reviews - Swiss Luxury at Affordable Prices
MEGIR WATCH REVIEWS - AN UNFAMILIAR FACE FROM THE EAST
A NIXON WATCH REVIEW - BEAUTIFUL, DIVERSE & SOMEWHAT COSTLY
TIMEX WEEKENDER REVIEW AMERICA’S BEST FIELD WATCH?
An Akribos Watch Review – Who’s the Brand Behind the Mask?
Heritor Watch Review: Modern, Classic Timepieces With A Twist
A Jack Mason Watch Review - Who’s The All American Brand?
The John Wick Watch - What On Earth Did He Wear?
Glycine Combat Sub Review: A Dive Watch For The Connoisseur?
Author
Thomas Vanderlaan
When Thomas Vanderlaan was a child, the moment he learned about mechanical watches he was hooked. His first love being mechanical watches, he decided to pursue a career in engineering as he was entranced by the science behind its gears. As the years passed, his passion grew. Although he worked a hectic career as an automobile engineer, he’d always collect watches during his spare time.
Affiliate links / Images from Amazon Product Advertising API. Wrist Watch Pro is a participant in the Amazon Services LLC Associates Program, an affiliate advertising program designed to provide a means for website owners to earn advertising fees by advertising and linking to amazon (.com, .co.uk, .ca etc) and any other website that may be affiliated with Amazon Service LLC Associates Program. As an Amazon Associate I earn from qualifying purchases.