Having collected all kinds of watches, I’ve come across many pieces that pay homage to it. I think the homage pieces Seiko has produced are the best - they truly embody the Cartier Tank’s luxury feel.

In Our Seiko Tank review, we discussed the tribute watches that are the most worth your time. Read ahead.

The Cartier Tank – At A Glance

The dress watch was designed by Louis Cartier . Its design was inspired by military tanks; its case shape is a compact rectangle.

The first of the Tank watches was gifted to John Pershing, in 1918, at a victory celebration. The rest is history. A whole line spawned.

Homage pieces pay tribute, but they don’t exactly copy the units they're based off of. They also have much lower price tags. As mentioned, Seiko has some great Tank ones. Let’s finally get into them. 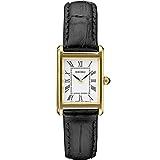 Compare the original Tank to it. From a distance, you’ll not be able to tell the difference. But closer up, you’ll notice that it’s smaller in size. Its face stretches 0.70 inches (18 mm) across. It is for ladies, so this isn't a surprise.

As it's so small, wearing it if you have large wrists would be awkward. You arm would look like a giant's.

The device has a black leather strap. It’s not made from fancy leather like the original, but it’s still a great quality one. It’s not too thick, so it won’t make your wrist sweat.

We have to say, Seiko did a superb job with its band. It’s embossed to look like crocodile skin.

The Seiko SWR054 has a thick case. This is a feature seen in the Tank(s). Its case is gold, which a specific Tank model also rocks. However, unlike it, it is just gold plated.

There are bold Roman numerals. They are placed on a white dial that is textured, helping them to pop. Its French counterpart did not come with a textured display.

Something else it doesn’t share with its counterpart is the material on its window. You’re met with Hardlex crystal. It is Seiko’s proprietary crystal. It can handle a beating. Meanwhile, Cartier placed sapphire on the original. Sapphire is the toughest glass around - scratches and scruffs won't ever be issues.

But a similarity they share is that they’re both quartz. Of course, it is Japanese, while the Cartier watch rocks the Swiss type.

The Seiko SWR054 has hands that are not as arrow-like. You also get an inner ring with jewels, which its more expensive alternative doesn’t have. No, the gems aren’t real. They’re synthetic pieces of glass.

It is water-resistant. The manufacturer says that it can handle up to 100 feet (30 meters) underwater. You probably shouldn’t get it wet, though. Its black leather band is horrible at being water-proof.

It'll make a fabulous gift for your wife. Instead of spending thousands, you can snag the tribute and make her think you spent a lot of money 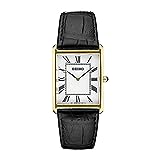 We think this Cartier Tank homage looks the most like the original. To begin with, there is no jeweled border, unlike the entry above. You’re getting a plain face full of large Roman numerals. The font on them looks very similar to the Cartier device's.

Of course, it is not identical. This would make it a replica, not a homage. The SWR052’s dial has a sunburst effect on it. This explains the metallic sheen. When you hold it at certain angles, it’s stunning.

It has a chunky case. It’s quite flush, similar to its counterpart. No surprise, it’s not made from expensive gold. It is stainless steel, with the metal-plated on. Its watch case is about the size of the French unit. It is 1.10 inches (28 mm). It's for men, which is why it's larger than its sibling above.

Speaking of size, its leather band isn’t thick. It’s nothing too high-quality. But it’s made to look like crocodile skin.

Seiko did not copy the Cartier Tank’s hands. They aren't arrow-like.

The device is water-resistant. It can handle 100 feet (30 meters) underwater. If you remember, we earlier said getting leather wet was not a good idea – the material is "anti water-proof".

The company’s favourite crystal is in place. It’s Mineral crystal; it can handle a beating.

It houses a quartz movement. Unlike the SUP250, it is not solar powered. This is a bummer as it would’ve been more convenient. However, this makes it more like the original.

Its case diameter is 1.41 inches (36 mm). Its leather band isn’t thick, thankfully. Know that the leather on it is not super high-quality. But Seiko made it look rich. It’s embossed to look like crocodile skin.

The Seiko SWR053 has ornate dots that are identical to the ones on the SUP250. Speaking of the SUP250, it comes with a dial that’s textured too. You can essentially think of it as the SUP250 but for the opposite gender.

Its case is pretty flushed. This is one of the first things you notice about the Cartier Tank, so this similarity is appreciated. It has numerals as hour markers that are big and full of lume.

You’re looking at a unit with a quartz movement. If you’re fond of solar pieces, you’ll love the Seiko SWR053. Its solar mechanism has a 12 month life.

What about the glass on its window? Hopefully, you’re a fan of Hardlex, as it’s present once more.

The Seiko SUP880 has a crown that is peculiar in shape. It’s very jewel-like, with a piece of coloured glass in the center. It also has more edgings around its corners. This lets you grip it easier. The Carter Tank is not like this. 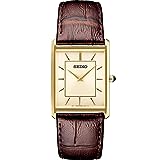 From all of the tributes on our list, the SWR064 is the least like the Cartier watch. Remember that the timepieces aren’t meant to be identical, so you can’t be mad. We're fans as Seiko did a good job with its build, though.

It has a chunky case. It has a leather strap which has stitching on its sides. This isn’t something you see on the original.

You don’t have to look close to notice that they’re not the most identical. The color on its dial is completely different. The SWR064 rocks a gold-toned face.

Another major difference is the absence of the Roman numerals. Instead, you’re met with slim rectangular markers. They’re gold, so they blend in with its display. This isn’t the best if you’re in a dim-lit setting; its display would be hard to read.

Of course, its case was gold plated and not made from the real deal. None of the above were made from the metal, so there’s no reason for Seiko to do so for the SWR064.

It’s water-resistant. What’s great is that it can handle more water than the above choices. It’s resistant up to 100 feet (30 meters).

We don’t recommend taking it to the pool. Remember what we said how badly waterproof the material on its strap is.

It is as big as most Tank homages. Its case stretches 1.12 inches (28.5 mm) across. But unlike them, it doesn’t try to replicate the original's crown. It has a simple gold one. It’s grooved well. You’ll easily be able to grip it.

You're looking at watch that houses a  quartz movement. Know that the Cartier Tank is small. Automatic mechanisms require many gears. For devices paying homage, they’ll find it hard to insert them into such petite builds. If you didn’t know, Seiko’s known for their automatic movements.

You’re not looking at just any quartz piece. It is solar-powered. The unit lasts for about 1 year once fully charged. You can charge it from all kinds of light sources.

Cartier Tank’s are some of the most esteemed pieces a watch collector could own. The original has quite the history and heritage to it - it’s great that there are homage watches around. Although we think Seiko does them the best, there are superb options from other brands too. Their price tags aren't as expensive as the French piece's.

Not only does the Japanese watchmaker make the devices look similar, but they build their tribute pieces well, utilizing quality stainless steel, Hardlex and quartz movements. A lot of the units we discussed use solar energy which their French counterpart does not, but the feature is very useful

The homage watches have an appearance that is square and compact. As they look like a million bucks, you'd fool anyone into thinking you spent thousands. Like the original Tank, the alternatives are small. Make note if your wrist is large or not; men with large wrists would have a harder time than women.

As they're rather small, telling the time if you have bad eye-sight might be hard.

So, what are your thoughts on our choices? Which tank homage will you be spending money on?

Related Posts
Seiko SKX175 vs SKX009 – Are They Really That Similar?
Seiko SNK805 Review – Does Beauty Matter?
Seiko SARY057 Review - Seiko’s Very Best
Seiko 55 Fathoms - A Fabulous Dupe
Seiko SNK807 Review - Reliable & Rugged
Seiko SKX175 Review - A Look at Japanese Excellence!
Seiko Sea Urchin - A Complete Watch Review
What’s The Best Seiko Watch? 8 Watches You Need In Your Life
Seiko Vs Citizen: Two Excellent Japanese Watchmakers Compared
Seiko Field Watch Review - Who’s the Best?
A Fight Between Brothers- A Seiko SKX007 VS SKX009 Review
Seiko Skx013 Review – A Look At Seiko’s Best Dive Watch?
Seiko Sumo Review - Who’s the New Kid in Town?
SKX173 vs SKX007 - (Almost) Identical Twins
Seiko SNK809 - Chic & Functional
Seiko Aliens Watch - What Were the Futuristic Pieces?
Seiko Sarb035 Review: A Collector's Favorite & Modern Classic
Seiko Digiborg Review - 007’s Timepiece
SKX173 - A Complete Run Down
SKX007 vs SKX013 - A Complete Watch Review
The Seiko Flightmaster SNA411 - A Pilot's Life For Me
Seiko Baby Tuna - A Complete Watch Review
SKX009 - A Complete Watch Review
Author
Thomas Vanderlaan
When Thomas Vanderlaan was a child, the moment he learned about mechanical watches he was hooked. His first love being mechanical watches, he decided to pursue a career in engineering as he was entranced by the science behind its gears. As the years passed, his passion grew. Although he worked a hectic career as an automobile engineer, he’d always collect watches during his spare time.
Affiliate links / Images from Amazon Product Advertising API. Wrist Watch Pro is a participant in the Amazon Services LLC Associates Program, an affiliate advertising program designed to provide a means for website owners to earn advertising fees by advertising and linking to amazon (.com, .co.uk, .ca etc) and any other website that may be affiliated with Amazon Service LLC Associates Program. As an Amazon Associate I earn from qualifying purchases.