The original Sumo hit the market in 2007, and was known as the SBDC031. Over time, more of them joined the ranks. But we think the 2019 variant is the best. We compared it with the original in our Seiko Sumo review.

Before we dive in, read through the following table. We summarized the SPB103J1’s specs.

The timepiece is a vision in green. You don’t see watches this colour, so it’s intriguing to look at. It’s big. Its case stretches 1.77 inches (45 mm) across, and it’s around 2.08 inches (53 mm) from lug-to-lug. Build wise, it’s identical to the original SBDC031. It has a wide case and slim strap too.

It’s a unit that’s perfect for the seas. That’s why it’s made from high-quality stainless steel. Water will easily flick off it. You’ll also find it hard to scratch.

Like most Seiko divers, it has large rhomboid markers in place. They’re full of lume. That’s why they’re tinted.

There’s an oyster case on it. You usually see it on more expensive devices. The SPB103J1 isn’t cheap, but it’s not the most expensive watch out there.

It looks especially rich as there’s a quality sunburst effect to it. When the light hits, the timepiece sparkles. You didn’t get the effect on the original Sumo.

You’ll find it hard to scratch its display up. It’s made from sapphire. If you didn’t know, it’s the toughest glass around. You met Hardlex on the SBDC031 instead.

As mentioned, there are rhomboid markers with luminous pigment. The markers are huge, so you get a great canvas for the lume to shine on. Did we mention the name of the pigment present? It’s Seiko’s favourite LumiBrite. It’s one of the best around. It will be a torch deep underwater. You’re getting it on its hands too.

Speaking of its hands, there is a pretty big one for the seconds. No surprise, it also glows in the dark.

The timepiece is made even more functional with the presence of a date feature. It’s in the 3 o'clock position, so you won’t be straining your neck.

There is a crown at the 4 o'clock angle. This prevents it from slamming into your wrist. This position of the crown is something widely seen in Seiko’s dive watches, so it’s not surprising that it’s on the SPB103J1 too.

It’s also not a surprise that its bezel rotates. You can rotate it unidirectionally, recording the minutes lapsed in an hour. To grip its bezel, there are edgings. However, they aren’t the most abundant.

One of the biggest improvements of the 2019 Sumo is its movement.  The timepiece comes with the 6R35 mechanism. The calibre offers a superior power reserve. It is 70 hours. Meanwhile, its predecessors’ is 50 hours. In case you’re wondering, the old mechanism was the 6R15.

What exactly is a power reserve, though? It’s how long the gears on your automatic watch can last on their own. They use kinetic energy to power themselves, which the movement from your arms enables.

The cherry on top is the fact that it comes with hacking. You’ll be able to halt its seconds’ hand, making it even more accurate.

In terms of the jewels present, you’re getting 24. This isn’t too bad – your watch would run smoothly. The more jewels present, the less of effect friction would have. They aren’t real of course. They are synthetic and are placed between bearings to lubricate them.

We would’ve loved if an exposed back was present. You’d be able to peak at the watch’s gears in motion. But it is a diving piece, so this wouldn’t be safe, even with a thorough glass back.

Like the 2007 Sumo, you’re looking at a timepiece that can handle 660 feet (200 meters) underwater. It’s ISO certified, so you have nothing to worry about. It is full of lume. As you know, it’ll be very readable underwater. This is especially true as its face is so huge.

Being able to rotate its bezel lets you time yourself, and get out of the pool. It makes 120 clicks in an hour, and they’re loud.

Something it shares with the original model is that they both wear stainless steel bracelets. The SPB103J1 has a deployant clasp. It is the push-button fold-over type. It’s a breeze to work like its name suggests.

It’s great for diving as it’s secure. This is especially true as the clasp it wears has an extra safety lock.

Now that you know everything about it, let’s look at its counterparts. They are the other Sumos the company has released throughout the years. 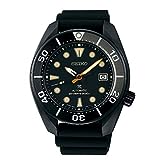 This is a Seiko Sumo limited edition watch. It is a pitch-black, with orange markers. It’s a dive watch, which is why the presence of the orange makes it easier to read.

The pigment on its hands and markers is LumiBrite. As you know, it’s a beast of a lume. Considering that its dial is a dark black, the pigment shines brighter.

It is as water-resistant as its counterpart. It can handle 660 feet (200 meters) underwater. Of course, it’s ISO certified. That’s why its face is huge. Just like you’d expect from a Sumo, there’s also a thin strap. Its case stretches 1.77 inches (45 mm) across.

In terms of its window, you’ll be peaking through sapphire crystal. Not only would you be able to read the time, but you’d know which day of the week it is too. The timepiece has a calendar in the 3 o'clock position.

Speaking of positions, its crown is at the same angle as before. We’re fans as it won’t get in your way.

If you’re wondering about its movement, it is the 6R35. In case you forgot, this results in a 70-hour power reserve and 24 jewels between its gears. Once again, no exposed back is present.

We think it looks better than the Seiko Sumo green watch. Its black is ion-plated, so it’s ultra-chic. 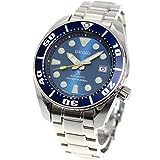 It is a beautiful sea-blue. It has a metallic look to it, which makes it look more expensive. It has gigantic rhomboid markers. They are full of lume. This explains the tint to them. As you can imagine, LumiBrite is present again.

There is also a date feature. It’s in the 3 o'clock position, just like its green counterpart. Its crown is in the same position as its too – this makes it more comfortable to wear.

The watch can handle depths as much as its alternative. They are both water-resistant up to 660 feet (200 meters). Its glass can handle such depths. However, it’s not as tough as sapphire. It’s Hardlex, which was in the original Sumo watch as well.

Yes, it is automatic. The mechanism inside of it is the 6R15. It is in the original Sumo. It results in a 50-hour power reserve, which is still really good. And 23 jewels between its gears.

Unfortunately, you’re not met with an exposed back. None of the Sumo timepieces come with it. 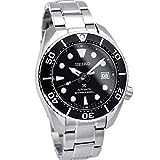 Along with the SPB103J1, the SPB101J1 was released in 2019. They are alternatives to each other. The most striking difference is their colours. The timepiece comes in a classic silver and black design. It looks a lot like the first Seiko Sumo.

The watch is as big as its green alternative. It comes with the same movement as it too – they both rock 6R35 mechanisms.

The device has a bezel that rotates. It allows for 120 clicks an hour. It is grooved superbly, so you won’t have trouble gripping it.

Its markers are large and rhomboid. They’re full of LumiBrite. They aren’t tinted, though. They’re more off a pure white, which is out of character for a Seiko piece.  But they contrast against its dark exterior well.

It has a calendar. You’re more than familiar with its position. You’re also probably aware that it only reads the date too.

Yes, it’s very water-resistant. It can handle 660 feet (200 meters) underwater. One of the reasons it’s such a great diving watch is because of the quality stainless steel it’s made from. Of course, it’s screwed down really well. That’s why no exposed back is present.

The timepiece looks way better than its 2007 counterpart. We really think the green makes it more appealing. It comes with a similar build. But they have different mechanisms. The 2019 variant has a more powerful window too.

When compared to the other Sumos, you’ll realize that they’re all pretty similar. At the end of the day, you won’t go wrong with any of them. They’re fabulous dive watches. Seiko’s a company that’s been around for a while, so you’re getting expert craftsmanship with whatever you buy.

Related Posts
Seiko SKX175 vs SKX009 – Are They Really That Similar?
Seiko SNK805 Review – Does Beauty Matter?
Seiko SARY057 Review - Seiko’s Very Best
Seiko 55 Fathoms - A Fabulous Dupe
Seiko SNK807 Review - Reliable & Rugged
Seiko SKX175 Review - A Look at Japanese Excellence!
Seiko Sea Urchin - A Complete Watch Review
What’s The Best Seiko Watch? 8 Watches You Need In Your Life
Seiko Vs Citizen: Two Excellent Japanese Watchmakers Compared
Seiko Field Watch Review - Who’s the Best?
A Fight Between Brothers- A Seiko SKX007 VS SKX009 Review
Seiko Tank Watch Review – Say Hello To The Best Tank Homages
Seiko Skx013 Review – A Look At Seiko’s Best Dive Watch?
SKX173 vs SKX007 - (Almost) Identical Twins
Seiko SNK809 - Chic & Functional
Seiko Aliens Watch - What Were the Futuristic Pieces?
Seiko Sarb035 Review: A Collector's Favorite & Modern Classic
Seiko Digiborg Review - 007’s Timepiece
SKX173 - A Complete Run Down
SKX007 vs SKX013 - A Complete Watch Review
The Seiko Flightmaster SNA411 - A Pilot's Life For Me
Seiko Baby Tuna - A Complete Watch Review
SKX009 - A Complete Watch Review
Author
Thomas Vanderlaan
When Thomas Vanderlaan was a child, the moment he learned about mechanical watches he was hooked. His first love being mechanical watches, he decided to pursue a career in engineering as he was entranced by the science behind its gears. As the years passed, his passion grew. Although he worked a hectic career as an automobile engineer, he’d always collect watches during his spare time.
Affiliate links / Images from Amazon Product Advertising API. Wrist Watch Pro is a participant in the Amazon Services LLC Associates Program, an affiliate advertising program designed to provide a means for website owners to earn advertising fees by advertising and linking to amazon (.com, .co.uk, .ca etc) and any other website that may be affiliated with Amazon Service LLC Associates Program. As an Amazon Associate I earn from qualifying purchases.