The Seiko SNK805 isn’t the brand’s only field watch. It’s one of a whole line-up. It’ll make your time outdoors easier. Why don’t we talk more about it below?

We’ve summed up the watch’s specs in a table:

The watch looks rugged. It comes in a khaki green colour that isn’t the most formal. Its appearance won’t do anything to help your outfit. However, it’d be great to hunt with – its green body camouflages well.

One of the reasons it looks so rugged is its strap. It’s made from Nylon. It doesn’t scream luxury. But the SNK805 is a field watch, so the material is what you want. It’s very durable.

The timepiece isn’t too big. Its case stretches 1.45 inches (37 mm). It isn’t that heavy either. This will help when hiking as you won’t have anything weighing you down. If it had more heft to it, it’d feel more premium, though.

It looks like a standard field watch. It has a wide dial, with a thin silver case. It also has large Arabic numerals.

Its crown is in the 4 o'clock position. No, Seiko didn’t place it there just to spice things up. It results in you slamming its crown into your hands less.

Something cool about its design is its exposed back. You can watch its gears move this way.

Out of the many crystals available, the SNK805 has hardlex in place. The glass is tougher than mineral but is not as resistant as sapphire. Hardlex is widely seen in Seiko devices.

Its dial is dark green while its hour markers are white. The contrast lets you read them easily. The watch has 2 rings marking the hours passed. One of them reads the time in a 24-hour format while the other reads it in a 12-hour standard. Having military time available is expected as field watches were made for soliders.

Yes, there is lume on its dial. However, it isn’t that strong. It’s just bright enough to be read when it’s getting dark outside.

There’s a calendar on it. It reads the day as well as the date. Something neat about it is that the day and date are in contrasting colours.

About its case – it’s made from stainless steel. Its bezel is as well. We’re happy that they aren’t poor in quality.

Field watches don’t have to be that water-resistant. They’re made for the outdoors, not for hitting the pool. The SNK805 can withstand 100 feet (30 meters) underwater. According to Seiko, it can handle a couple of splashes.

As you know, the device has a nylon strap. The material is not waterproof. It also dries slowly.

There is lume on its display, but you can barely read it underwater as it’s not very pigmented.

Most of the time, field watches are quartz. After all, they were created to be read on the field. Automatic watches aren’t as accurate as their quartz counterparts. There are so many parts in them that they’re not as reliable.

The timepiece comes with the 7S26B movement. It has 21 jewels between its gears and a 41-hour power reserve. No, the jewels aren’t real. They’re synthetic. They’re placed between gears to reduce friction. The more present, the more accurate your watch would be. 21 is a standard amount.

If you’re new to automatic watches, you probably have no idea what a power reserve is. Know that automatic timepieces use kinetic energy from your arm to automatically wind their gears. Power reserves indicate how long their gears can move while off your wrist. 41 hours is pretty standard.

The field watch seems great. Why don’t we spice up our Seiko SNK805 review by comparing it with its alternatives?

The SNK807 looks identical to its counterpart. The only difference is that it’s a vision in blue. We think the colour makes it more appealing. But it might not be the best for camouflage.

Both devices come with nylon straps. As you know, the material is durable but not very waterproof.

You’re not getting the most water-resistant timepiece. The SNK807 can only handle 100 feet (30 meters) underwater. You’re advised to not swim with it on. A dunk or two is fine. Considering how wet its strap will get, dunking the watch may not be a good idea.

There’s hardlex crystal on its window. We think its dark blue dial and white markers contrast better than the SNK805’s colourway. Speaking of its dial, there’s a calendar on it.

You probably noticed the rings on its face. One of them reads the minutes while the other reads the hours – in a 12-hour standard.

Thankfully, its crown isn’t in the 3 o’clock position.

The timepiece is automatic. It comes with the 7S26 movement. We met the mechanism in its brother’s review, but in case you forgot, there are 21 jewels and a 41-hour power reserve. It’s been reported that it can last 43 hours, though.

It also comes with an exposed back. We love looking at its gears move!

The watch is black. The colour is much nicer than green. We think the Seiko SNK809 looks good on outfits. Its dark colour will help you camouflage only when it’s night out.

The watch isn’t that big. Its case stretches 1.45 inches (37 mm) across. Weight-wise, it’s heavier than its counterpart.

The timepiece comes with a nylon strap. You already know how we feel about it.

It can handle as much water as its sibling. Remember what we said about getting its band wet.

There’s hardlex crystal on its display. You can probably guess that we’re fans of the mineral.

Its black dial and white markers are the easiest to read – they contrast the most. You don’t have to look too hard to notice a calendar on its display. It’s in the 3 o'clock position, so you won’t be straining your neck.

Just like its brother, there are rings that tell the time. One of them reads the minutes in an hour while the other reads the hours in a day.

It’s an automatic device. The movement on it is the 7S26. You’re getting a 41-hour power reserve and 21 jewels on its gears. There’s an exposed back letting you peek at its gears.

We aren’t fans of crowns in the 3 o'clock position, which is why we’re glad that the SNK809’s is in a certain angle. 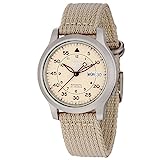 The watch is the same size as its sibling. It comes in a different colour. Its beige body makes it more subtle, and kind of feminine. There are sharp black numerals on its beige display. They contrast well, making the watch a breeze to read. Yes, there are 2 rings on its dial. One of them reads the hours while the other reads the minutes.

The device isn’t that heavy. It comes with a calendar too. The feature will be useful when on camping trips.

Once again, you’re looking at an automatic watch. The SNK803 comes with the 7S26 movement. It’s the same one on its brother. There is an exposed back. Watching its gears move is a great way to pass time.

Its display can handle a beating, but don’t get too rough with it – there’s hardlex in place.

You’d notice that its crown is in the 4 o'clock position. Your hand won’t be slamming into its crown.

What is its strap made from? Nylon of course.

We think the Seiko 5 automatic SNK805 is a field watch you’ll be happy with it. It’s durable and easy to read. It’s not heavy either, so you’ll be able to take it on hiking trips. The timepiece is automatic, which isn’t something traditional for a field watch, but Seiko makes it work. We’re fond of it.

Related Posts
Seiko SKX175 vs SKX009 – Are They Really That Similar?
Seiko SARY057 Review - Seiko’s Very Best
Seiko 55 Fathoms - A Fabulous Dupe
Seiko SNK807 Review - Reliable & Rugged
Seiko SKX175 Review - A Look at Japanese Excellence!
Seiko Sea Urchin - A Complete Watch Review
What’s The Best Seiko Watch? 8 Watches You Need In Your Life
Seiko Vs Citizen: Two Excellent Japanese Watchmakers Compared
Seiko Field Watch Review - Who’s the Best?
A Fight Between Brothers- A Seiko SKX007 VS SKX009 Review
Seiko Tank Watch Review – Say Hello To The Best Tank Homages
Seiko Skx013 Review – A Look At Seiko’s Best Dive Watch?
Seiko Sumo Review - Who’s the New Kid in Town?
SKX173 vs SKX007 - (Almost) Identical Twins
Seiko SNK809 - Chic & Functional
Seiko Aliens Watch - What Were the Futuristic Pieces?
Seiko Sarb035 Review: A Collector's Favorite & Modern Classic
Seiko Digiborg Review - 007’s Timepiece
SKX173 - A Complete Run Down
SKX007 vs SKX013 - A Complete Watch Review
The Seiko Flightmaster SNA411 - A Pilot's Life For Me
Seiko Baby Tuna - A Complete Watch Review
SKX009 - A Complete Watch Review
Author
Thomas Vanderlaan
When Thomas Vanderlaan was a child, the moment he learned about mechanical watches he was hooked. His first love being mechanical watches, he decided to pursue a career in engineering as he was entranced by the science behind its gears. As the years passed, his passion grew. Although he worked a hectic career as an automobile engineer, he’d always collect watches during his spare time.
Affiliate links / Images from Amazon Product Advertising API. Wrist Watch Pro is a participant in the Amazon Services LLC Associates Program, an affiliate advertising program designed to provide a means for website owners to earn advertising fees by advertising and linking to amazon (.com, .co.uk, .ca etc) and any other website that may be affiliated with Amazon Service LLC Associates Program. As an Amazon Associate I earn from qualifying purchases.