Seiko’s presage line takes its ordinary watches and does them up. The SARY057 is a good example of this. It looks and performs much better than a Seiko 5. We’ve run through everything you need to know about it in our Seiko SARY057 review.

We’ve made things easier for you by running through the timepiece’s specs.

The Seiko piece looks expensive. It comes with a shiny stainless steel body that does the trick. It’s shinier than regular stainless steel, mainly due to its pearl coating. Its dial is a chic black, which just screams luxury.

The watch isn’t that heavy and weighs 5.61 ounces (159 grams). This makes it feel well-built. The quality of its stainless steel helps with this as well. It’s also not heavy enough to weigh your wrist down.

The SARY057 is not big. Its case stretches 1.61 inches (41 mm) across. If you have smaller wrists, it won’t eat you up.  Its bracelet isn’t that wide either.

The glass on its window is sapphire. The crystal is the toughest around, so good luck trying to dent it. We, unfortunately, don’t think the watch is the easiest to read. Its dial is black while its hour markers are silver. They don’t contrast that well together.

The markers on it are baton-shaped. You see these in premium devices.

The watch has a calendar feature. It’s on the 3 o’clock position, so you won’t strain your neck trying to read it. However, it’s black and silver, which as you know, aren’t the easiest to read.  But we appreciate that it reads the day as well as the date.

The Seiko Presage SARY057 is a classic dress watch. There is no lume on it. This is a shame as Seiko’s favourite LumiBrite packs a punch.

Not only is its strap made from stainless steel, but so is its case and bezel. They have a pearl-like effect too.

We also like its skeleton back. It lets you observe its gears in motion. As it’s an automatic device, there are many gears present.

It is a fabulous automatic piece. It comes with the 4R36 movement. It’s one of the brand’s favourites. It comes with a 41 hour power reserve and 24 jewels between its gears. If you’re a watch newbie, you probably have no idea what this means. Well, power reserves are how long an automatic watch can be off your wrist. It uses the kinetic energy from your arm to power its gears. The power reserve indicates long it can keep its gears moving with the energy it collected.

Before you get too excited, the jewels aren’t real. They’re pieces of glass. Real gems were once used, and the ones currently available are made to resemble them. They’re placed between gears. If not for them, friction would eat at them. As you can imagine, the more jewels present, the smoother a watch would be. We’re happy to say that 24 is above the standard amount.

The 4R36 mechanism comes with hacking and self-winding. More and more watches have these features. Hacking is when you halt a watch’s seconds’ hand, adjusting it. You can probably guess what self-winding is.

Being made from stainless steel, you’re getting a waterproof device. The watch can handle quite a bit of water. It’s resistant up to 330 feet (100 meters). You can swim and snorkel with it on – Seiko strongly advises not yo dive with it, though. The timepiece is not ISO 6425 certified.

Being underwater with it, you won’t be able to read the time. As you know, the SARY057 doesn’t have any lume on its display.

Its case and crown are sealed up pretty well so water can’t get in.

With that out of the way, you’ll know it feels and looks expensive. Let’s see how it fares against its alternatives.

The timepiece is not that big. Its case is 1.61 inches (41 mm), like its counterpart. It weighs as much too. They’re both a little over 5.5 ounces (155.9 grams). We think the SARY055 feels well built, especially since there’s quality stainless steel on it.

Just like its brother, the steel on it is shiny. Seiko added a pearl finish.  We think the SARY055 looks more expensive - its ivory dial just exudes luxury.

You’re looking at another automatic watch. The timepiece comes with the 4R36 movement. Just to jog your memory, it comes with 24 jewels and a 41-hour power reserve. Of course, it comes with self-winding and hacking.

The device is pretty water-resistant. It can handle 330 feet (100 meters) underwater. If you’re thinking of diving with it on, think again. Unfortunately, it doesn’t come with luminous paint that’ll help you read it when submerged.

As a more premium timepiece, it has sapphire on its dial. We had a hard time trying to scratch it up.  Speaking of its dial, you get a calendar on it. It looks identical to the SARY057. The only thing is that it’s easier to read. It is ivory and black, which has more of a contrast. 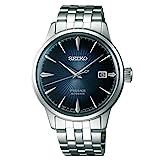 The SRPB41J1 does not look like the SARY057. The device has a dark blue dial. There’s almost a gradient effect to it, which is pretty good-looking. The dial has hour markers that don’t have lume. There isn’t any luminous paint on its hands either. This is a shame as Seiko’s LumiBrite is dynamic.

It’s not that water-resistant. It can only handle 165 feet (50 meters). As its body is made of quality stainless steel, worrying about corrosion will never be an issue. Don’t dive with the watch on, though.

Unfortunately, the SRPB41J1 doesn’t come with a sapphire window. The dial has a hardlex one. Hardlex is widely used in Seiko devices. It isn’t bad but it’s not as resistant as sapphire.

Of course, the device is automatic. Its mechanism is similar to the SARY057’s - it’s the 4R35. It is impressive as it comes with 23 jewels and a 41 hour power reserve. It’s good but it’s clear that its counterpart’s mechanism is better.

Does it come with self-winding and hacking? Thankfully, yes.
The device comes with a skeleton back. The entry above has an exposed rear as well. Since they’re both automatic watches, seeing their gears in motion is pretty mesmerizing.

The watch is superior to a regular Seiko 5. It looks more expensive and performs better as well. The timepiece is not cheap, but Seiko did a good job making it look more expensive than it is. If you’re on the market for a dress watch, we recommend it!

Related Posts
Seiko SKX175 vs SKX009 – Are They Really That Similar?
Seiko SNK805 Review – Does Beauty Matter?
Seiko 55 Fathoms - A Fabulous Dupe
Seiko SNK807 Review - Reliable & Rugged
Seiko SKX175 Review - A Look at Japanese Excellence!
Seiko Sea Urchin - A Complete Watch Review
What’s The Best Seiko Watch? 8 Watches You Need In Your Life
Seiko Vs Citizen: Two Excellent Japanese Watchmakers Compared
Seiko Field Watch Review - Who’s the Best?
A Fight Between Brothers- A Seiko SKX007 VS SKX009 Review
Seiko Tank Watch Review – Say Hello To The Best Tank Homages
Seiko Skx013 Review – A Look At Seiko’s Best Dive Watch?
Seiko Sumo Review - Who’s the New Kid in Town?
SKX173 vs SKX007 - (Almost) Identical Twins
Seiko SNK809 - Chic & Functional
Seiko Aliens Watch - What Were the Futuristic Pieces?
Seiko Sarb035 Review: A Collector's Favorite & Modern Classic
Seiko Digiborg Review - 007’s Timepiece
SKX173 - A Complete Run Down
SKX007 vs SKX013 - A Complete Watch Review
The Seiko Flightmaster SNA411 - A Pilot's Life For Me
Seiko Baby Tuna - A Complete Watch Review
SKX009 - A Complete Watch Review
Author
Thomas Vanderlaan
When Thomas Vanderlaan was a child, the moment he learned about mechanical watches he was hooked. His first love being mechanical watches, he decided to pursue a career in engineering as he was entranced by the science behind its gears. As the years passed, his passion grew. Although he worked a hectic career as an automobile engineer, he’d always collect watches during his spare time.
Affiliate links / Images from Amazon Product Advertising API. Wrist Watch Pro is a participant in the Amazon Services LLC Associates Program, an affiliate advertising program designed to provide a means for website owners to earn advertising fees by advertising and linking to amazon (.com, .co.uk, .ca etc) and any other website that may be affiliated with Amazon Service LLC Associates Program. As an Amazon Associate I earn from qualifying purchases.