A Seiko SARB035 Review - Gone But Not Forgotten 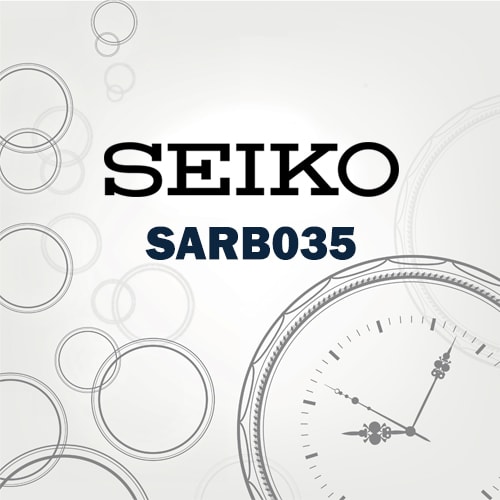 As a self-proclaimed watch snob, I love timepieces that’re expensive. They turn the most heads. Thankfully, some watches that look like a million bucks don’t cost much. The SARB035 fits the bill.

While it’s now discontinued, you can still find them in select outlets or buy it secondhand in brand new condition.

But first, is this watch for you?

Our Seiko SARB035 review will cover the design, movement, dial and more.

We could jump right in, but we think that running through the SARB035’s specs is a good first move.

How could we review the Seiko SARB035 without talking about its good looks? It’s classic looking, but most importantly, elegant. The 035 is called a Baby Grand Seiko for a reason. It’s near-identical to timepieces from the line. Grand Seiko has watches that are over $10,000, so we’re over the moon about this.

It doesn’t come with a sunburst effect, but you’ll definitely see its dial sparkle when held just right. The sheen is soft and subtle, helping the watch look expensive.

If you know anything about watches, you’d know that sapphire windows are the best there is. No surprise, the SARB035 comes with a sapphire lens. You don’t get regular sapphire either. Instead, its lens comes with additional scratch resistance.

There’s a catch to it, however. It isn’t genuine sapphire. Instead, a synthetic version.

You get dauphine markers that are grandfather clock-like. We would have loved some large, Arabic numerals. But obviously, this would’ve ruined the watch’s vintage look.

The edges of the SARB035’s markers are covered in luminous paint and so are its hands. We’re a fan of Seiko's LumiBrite, which is why we’re glad to see it on the timepiece. The paint is arguably the best on the market.

There’s a calendar feature that we appreciate. Although it’s small, it’s in an easy-to-read font, so we have no complaints.

What helps the watch look so regal is its size. You might not guess this from the pictures online, but its case is only 1.511 inches (38.4 mm) across. If you have larger hands, stay away from the SARB035 though, you’ll look like a giant with it on.

The Seiko SARB035 is made from regular, stainless steel. It’s not surgical grade which means it’s not as resistant as we’d like. Then again, it’s not like you’ll be dunking it in the pool every other week. So, you should be good.

You’ll notice that its body is pearl-like. This is as its case and bracelet have been polished. The slight sheen goes hand-in-hand with the one on its dial.

You’ll see a bit of curvature to it. It’s very Grand Seiko-like to have a concaved case.

In terms of its crown, it’s not the largest, so we couldn’t grip it as easily as we’d like. However, it comes with ample texturing, so gripping it is certainly not difficult.

We don’t have much to say about its bezel, other than it being made from the same steel as before.

We just have to talk about its back. The SARB035 is an automatic watch. So, it’s only natural that it has several gears inside it. You can peek through its exposed back case to see them move. It’s mesmerizing, to say the least.

Its bracelet is an oyster strap. It adds a business casual feel to the timepiece. If you weren’t aware, oyster straps are seen in more expensive watches. For starters, it’s present in the Rolex Submariner.

The watch has a push deployment clasp. With such a clasp, taking the SARB035 off is as easy as the literal push of a button.

If you know anything about Seiko, you’d know that the majority of its watches are Japanese automatics. The SARB035 is no different.

It comes with the 6R15 Caliber movement. This is one of the brand’s best, and due to it, the SARB has 23 jewels inside its gears. Along with it, a 50-hour power reserve is at your disposal.

The more jewels a watch has, the smoother its gears will run. The norm is 17, which is why the 23 are so great.

Essentially, automatic watches become a part of you. Their gears stop moving if they don’t have enough kinetic energy. This is why a power reserve as large as the SARB035’s is appreciated. It’s an enormous window of time to not have the watch on.

The 6R15 also lets you hand wind and hack the timepiece. These are things you see in the best automatic watches, so the SARB035 doesn’t disappoint.

In my books, a great watch has to have considerable water resistance. No surprise, the SARB can withstand a 330 foot (100 m) dip underwater. Such depths are seen in dive watches, but Seiko advises you to not dive with it on. Instead, use it for some light swimming or snorkeling.

As mentioned, LumiBrite is a marvelous luminous paint. That’s why it’s bright enough for such depths.

Being a pretty water-resistant watch, it’s unfortunate that its bezel doesn’t rotate. This means you can’t time yourself underwater. However, remember that the timepiece isn’t a dive watch, nor a waterproof one.

Moving on, it has an impeccably screwed-down crown and case. These are staples for watches that are resistant to such depths. Its stainless-steel body helps as well. The material is easy to clean and keeps corrosion at bay.

Hands down, the SARB035 is a spectacular timepiece. You’ll be making the right move by purchasing it. This doesn’t mean that there aren’t watches that give it a run for its money, however. In fact, there are a few.

You won’t be able to tell the difference between the two watches if they’re placed side by side. The Certina is small. Its case is 1.53 inches (39 mm) across. This along with its dauphine markers add a touch of elegance.

It also comes with a sapphire display. This time around, the sapphire isn’t synthetic. This is due to the watch being a Swiss device. If you know anything about Swiss watches, you’d know they’re made with the highest quality parts.

Since it’s Swiss, its automatic movement is amazing. Its gears move like butter, having an ETA caliber 2824-2 mechanism in place. This also means that you only get a 38-hour power reserve. The norm is 40, so we’re disappointed. Don’t get too disappointed, however, as you get 25 jewels inside of its gears.

It couldn’t be a SARB035 alternative if it wasn’t very water-resistant. With the Certina timepiece, you can dive up to 330 feet (100 m) underwater.

If you were expecting a SARB035 vs SARB033 review, we’ve got you covered:

The 033 is the closest thing to this. After all, they’re brothers. Unfortunately, its black dial sets them apart.

Both watches come with sapphire displays. We love this about the SARB033, but we don’t know how to feel about the sapphire being synthetic. At the end of the day, the 035 came with such a display too.

A Japanese automatic movement is found in the device. It comes with the 6R15 movement that you’re already familiar with. With such a mechanism, it’s great that an exposed back is present.

In terms of SARB033 specs, we just have to talk about its water resistance. It can also handle 330 feet (100 m) underwater. It even comes with LumiBrite, making underwater use a breeze. The luminous paint is on the same spots as its counterpart.

The SARY055 and the SARB035 look alike, minus the size. They both come with stainless steel bodies, dauphine markers, petite bracelets, and a pearl-like dial. We mentioned that they differ in size, but this isn’t by much. The SARY055 is only 0.122 inches (3.1 mm) larger.

Like the 035 and 033, the SARY055 is also a Japanese automatic. However, what is different is the caliber. Instead of the 6R15, you get the 4R36. This means that 24 jewels are in its gears. What we don’t love is its power reserve. It’s not as great, coming in at 41 hours. The ability to self-wind and hack saves the day.

Its water resistance is identical to the SARB035’s. Both watches can last 330 feet (100 m) underwater. So far so good, but things are about to get disappointing. Unfortunately, the SARY055 doesn’t have any luminous paint on it.

Other than that, you get a sapphire display that we’re fans of.

When you talk about the SARB035, you just have to mention the Visodate. That’s why we couldn’t wrap this review up without comparing the two.

Like the Certina, it’s a Swiss device that comes with an automatic movement. It has ETA 2836-2 inside it. This means that you get 24 jewels in gears, as well as a 40-hour power reserve. Yes, the device comes with hacking and self-winding too.

Although the two-look similar, it’s pretty obvious that they aren’t identical. After all, the Visodate has a leather strap. That being said, it feels quite nice as it’s made from genuine calfskin.

We love its sapphire display. Being a Swiss device, it’s no surprise that it’s not synthetic.

Last but not least, let’s talk about its water resistance. In terms of the Tissot Visodate vs Seiko SARB, the 035 beats its competitor. The Visodate can only handle 99 feet (30 m) underwater. It doesn’t help that it doesn’t have any luminous paint on its dial.

The SARB035 is one of Seiko’s most prized watches and is the epitome of luxury on a budget. It’s very Grand Seiko-like, which is one of the reasons why it’s so amazing. This was achieved by little nods throughout its design.

At the end of the day, the SARB035 is a worthy purchase. Sadly, the watch and its whole line was discontinued. However, should you get the 035? We’d say yes.

Its alternatives are just as good. They give the SARB035 a run for its money. The 035 is cheaper than most of them, so it’s the clear winner.