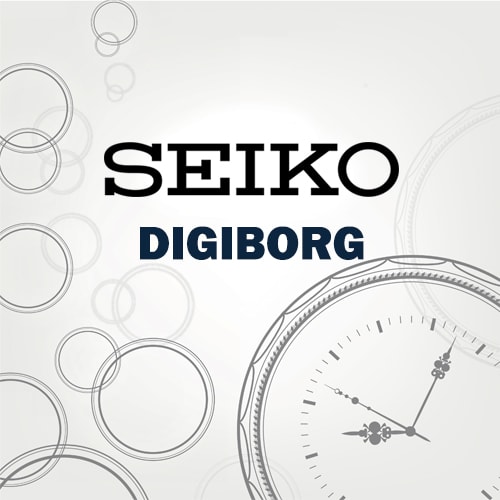 These futuristic-looking watches are quite popular in Japan. One watch from the line especially caught people’s attention – The Seiko sports 100 digiborg. We’ve talked about it and much more below.

What Is the Seiko Digiborg?

This isn’t one watch but a whole line. The company didn’t come up with its name, however. It came about due to its popularity and It isn’t hard to see why – the timepieces look futuristic, almost robotic.

They are digital watches with 4 buttons on the sides. Their face is partitioned and named. For example, the timer is above the alarm, which is below the dual time feature. Words can’t explain how ‘digiborg-like’ they look – you need to see pictures.

Something that makes the collection look futuristic is the icon on the side of their displays – they look like chipsets. Normally, stainless steel straps are in place, but depending on the model you pick up, you could get rubber.

The timepieces in the G757 collection look similar. You’ll easily mistake the James Bond Octopussy watch for its brother. We almost did so with the 5030. Let’s talk about 007’s watch below.

It’s made from quality stainless steel. Seiko did a good job with its build as denting it is hard. The silver on it is shiny, which is what anyone would want. Although the model has a deployant clasp, the movie shows the timepiece with a black clasp. Seiko never explained this. It is presumed that it was covered in black tape or paint during filming.

You’ll be able easily to access its modes due to the named features on the upper right corner. However, its display isn’t the easiest to read – by 2020’s standards at least. You’re getting a dim LCD front.

There is a chronograph on it. If you don’t know what the feature is, it is a stopwatch. You’ll be working the pushers on its sides to activate it.

As the Octopussy movie was made in the 1980s, it’s not surprising that you get a quartz movement. The specific quartz in it is Japanese, so it was made created with a very automated process. There is a myriad of quartz mechanisms out there. We, unfortunately, don’t know the specific one the watch uses. We do know that it’s very accurate, though.

The buttons on its sides are bulky. This makes them a breeze to reach, but they can poke at your wrist.

Something in the movie that is not in the timepiece is the Fabergé egg tracker. The Digiborg detects the bug in it through radio waves.

When watches are used in movies, we often don’t see them at all. This happened in Men in Black 3 with Hamilton’s Venturas. Scenes move fast and watches are small after all. Surprisingly, you see a lot of the Seiko piece in the film. We get a good close-up of it when Bond is in Germany – he looks at the watch to check how much time he has left until the bomb goes off.

Why wouldn’t you be interested in it? It’s part of movie history. Sadly, it will be hard to grab – it is notably rare. If you do find it, you’ll be spending thousands of dollars. It was once on eBay going for USD 2000. As the item is so sought after, stores sell pieces from the G757 line that look a lot like the Sports 100, which are priced similarly.

As the watch is so hard to grab, we ran through a cheaper alternative that is worth your time.

This watch is made of quality stainless steel. It’s shiny, so it’ll look good in low light. The HD-1A is highly water-resistant – it can handle up to 330 feet (100 meters). If you’re thinking of diving with it, we’ve got some bad news; it is not ISO 6425 certified. You can snorkel with it at the most.

Although its body is metal, its case is made from plastic. This isn’t a bad thing as the plastic is durable. It also blends well with the shiny stainless-steel strap.

There are 4 large pushers to work its features. They are placed exactly where you’d find them on the Seiko Digiborg. Everything is displayed on an LCD screen. However, there is an LED backlight. The features it offers are not too bad – you get access to 31 different time zones, 5 alarms, a world map (that looks very bond-esque), and a countdown timer.

It is a Japanese quartz device. We, unfortunately, don’t know the name of the specific movement used. That being said, it’s accurate and reliable.

The battery on it can last a while. According to Casio, it’ll be around for 5 years.

The timepiece looks stunning. Having it on your wrist would truly grab everyone’s attention. If you’re a watch collector, the device is a must-have – it is rare and was worn on 007’s wrist. The G757 line, on the whole, looks cool – its pieces are exquisite. But we’re disappointed that sellers sell similar pieces in the collection for the G757-5020 – and many people have gotten scammed.

As the James bond watch is so popular, there are many replicas and homage pieces available. The Casio AE1200WHD-1A is definitely worth your attention.

Related Posts
Seiko SKX175 vs SKX009 – Are They Really That Similar?
Seiko SNK805 Review – Does Beauty Matter?
Seiko SARY057 Review - Seiko’s Very Best
Seiko 55 Fathoms - A Fabulous Dupe
Seiko SNK807 Review - Reliable & Rugged
Seiko SKX175 Review - A Look at Japanese Excellence!
Seiko Sea Urchin - A Complete Watch Review
What’s The Best Seiko Watch? 8 Watches You Need In Your Life
Seiko Vs Citizen: Two Excellent Japanese Watchmakers Compared
Seiko Field Watch Review - Who’s the Best?
A Fight Between Brothers- A Seiko SKX007 VS SKX009 Review
Seiko Tank Watch Review – Say Hello To The Best Tank Homages
Seiko Skx013 Review – A Look At Seiko’s Best Dive Watch?
Seiko Sumo Review - Who’s the New Kid in Town?
SKX173 vs SKX007 - (Almost) Identical Twins
Seiko SNK809 - Chic & Functional
Seiko Aliens Watch - What Were the Futuristic Pieces?
Seiko Sarb035 Review: A Collector's Favorite & Modern Classic
SKX173 - A Complete Run Down
SKX007 vs SKX013 - A Complete Watch Review
The Seiko Flightmaster SNA411 - A Pilot's Life For Me
Seiko Baby Tuna - A Complete Watch Review
SKX009 - A Complete Watch Review
Author
Thomas Vanderlaan
When Thomas Vanderlaan was a child, the moment he learned about mechanical watches he was hooked. His first love being mechanical watches, he decided to pursue a career in engineering as he was entranced by the science behind its gears. As the years passed, his passion grew. Although he worked a hectic career as an automobile engineer, he’d always collect watches during his spare time.
Affiliate links / Images from Amazon Product Advertising API. Wrist Watch Pro is a participant in the Amazon Services LLC Associates Program, an affiliate advertising program designed to provide a means for website owners to earn advertising fees by advertising and linking to amazon (.com, .co.uk, .ca etc) and any other website that may be affiliated with Amazon Service LLC Associates Program. As an Amazon Associate I earn from qualifying purchases.