With 600 bucks to spare, the Seiko Baby Tuna is worth every penny.

It’s an all-round great dive watch, and you’ll learn why below. So, read ahead.

Before we dive in, let’s go through the watch quickly:

The baby tuna is an automatic watch. It comes with 24 jewels, ensuring its gears work as smoothly as possible.

Not all of us are watch nerds, and you may be wondering why the Baby Tuna has jewels in it. Well, this addition keeps its gears frictionless.

Since it’s an automatic watch, a self-winder is always handy. Luckily for you, you get such a feature with the Baby Tuna.

Even though winding is a feature you’ll appreciate, you may like want to hack the watch as well. With the ability to hack, you can adjust the Baby Tuna’s hands, making the time more accurate.

According to Seiko, the watch ‘maintains accuracy for 30 seconds a day’. That’s great, but we’re disappointed this differs per conditions the watch is used in.

We’ve mentioned that it’s automatic and has 24 jewels, but what type of automatic mechanism does it have?

If you’re wondering, the Baby Tuna is a 4R36. Seiko’s 4R36 allows it to have a day date function. This makes life easier for you as you’re always ahead of things.

The watch has a case that’s on the thicker side: it’s 1.88 inches (48 mm). Many people are a fan of watches this chunky as they have a specific feel. Are you one?

With a 1.88 inches (48 mm) case, your wrists may feel a bit heavy but this comes with a benefit. Being so thick, the case can take a beating. So if you’re clumsy, you don’t have to worry.

The fact that it’s scalloped shaped helps with comfort as well. The shaping fits your wrist perfectly.

Its chunkiness isn’t the only durable thing about the case. It has a stainless steel covering, keeping scratches at bay.

Yes, the addition of stainless steel is great but at the end of the day, this isn’t something we haven’t seen before.

The Baby Tuna has an extra hard coat. This is in either black or blue (but this may only be present in certain models).

Similar to the case, its bezel is stainless steel with an added hard coat.

As the watch is fit for diving, the bezel was made accordingly. Users have noted that it’s easy to rotate which makes life easier underwater.

It ticks every 15 seconds for its Arabic numerals and 5 for its white markings.

Moreover, we find it cool that the bezel has fin-like markings on its side, it’s very retro.

The dial is very beautiful. From the many watches I’ve seen, the Baby Tuna is one of the best looking automatic watches out there.

Its display is pitch black, having gold accents throughout. The gold is in the hands and markings. Although it’s a deep black, the markings and hands are white with a gold border. The combination of all 3 colours makes it very appealing to the eye.

That being said, there’s a downside; its markers are quite big. This makes it very busy looking. Due to the bunching up of everything, reading time can be an eye strain.

The size of the markings is to make reading easier, because of the watches lume. It allows for more than enough space for the LumiBrite. As you can imagine, this makes the watch impeccable underwater and in the darkest environments.

If you’re not a Seiko fan, you probably don’t know how great its LumiBrite is. It can glow up to 5 hours fully charged. Being able to last for so long is awesome, but you can only charge the lume through sunlight.

Although it’s a limitation, it will not a problem as you don’t live in a cave, do you?

Having LumiBrite, the watch would light up even if the room is dimly lit.

If you’re interested in what type of material its display window is, it’s hardlex crystal. This material lets you keep scruffs at bay.

Many use the Baby Tuna as their go-to dive watch. Why?

Firstly, it can last up to 660 feet (200 m) underwater. This means it’s perfect for snorkeling. Seiko ensured the watch would be functional when submerged. This is as it is ISO 6425 certified.

Second, the fact that its crown is sealed and that it has a unidirectional bezel makes diving easier.

And thirdly, the Baby Tuna has a stainless steel strap. Although it isn’t the most eye-catching, it’s a material perfect for underwater use. It's corrosion-free and is easy to maintain; perfect for the lazy!

Also, Polyurethane is comfortable on the skin.

The Baby Tuna is not the cheapest dive watch out there. It’d be great if it had a helium valve as cheaper watches have this feature. If you’re not aware of what a helium valve is, it helps relieve gas pressure as you resurface.

Having run through its features, let’s talk about some competitors that give the Baby Tuna a run for its money.

The Tuna is expensive. It’s almost $1000 and not many of us have that type of cash lying around. This is why Seiko created the Baby Tuna, a budget alternative.

Likewise, the Tuna acts as a great alternative to its cheaper counterpart. It brings much of the same features but packs a greater punch.

So how does a Seiko tuna VS baby tuna fair?

Its case is very similar to the Baby Tuna’s. They both come with one made from stainless steel. Of course, this is similar to most other watches out there as well.

So far, the Seiko Tuna seems to be the better alternative. This is true for water resistance as well. The Tuna has a water resistance of 990 feet (300 m), making it ideal for diving at heavy depths.

It also comes with a rotating bezel that has ‘fins’ popping up.

What really differentiates the Tuna from the Baby Tuna is the movements in each. While the Baby Tuna is an automatic watch, its counterpart is Quarts. If you’re wondering what type of Quartz it is, it’s Japanese.

To be more specific, the Tuna has 7C46 movement in it.

In terms of the display, there’s nothing too special about the watch. They both come with Seiko’s signature Hardlex crystal display.

When its dark, the LumiBrite paint helps you out.

You’ll notice the same black and gold accents in the Baby Tuna here as well, which is appreciated. That being said, the gold accents are very slight. 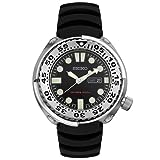 The Seiko Sawtooth is the brand’s answer to a dive watch that’s as effective as the Tuna line. So, the Sawtooth can go head-to-head with the Baby Tuna.

The case is made completely from stainless steel. It extends to the bezel as well. The case being lightweight and the sawtooth’s strap being stainless steel makes the watch easy to wear. This is reminiscent of the Baby Tuna with its scalloped case.

The Sawtooth is similar to the Baby Tuna in terms of water resistance. They’re both fit for 660 feet (200 m) underwater, perfect for intense scuba diving.

A unidirectional bezel and screwed down crown helps keep water at bay as well.

The watch is very different in terms of movement. You won’t see an automatic mechanism. Instead, it’s a Japanese Quartz.

This makes it noticeably lighter than the Baby Tuna as the watch is only 0.4 inches (11 mm).

The display is made from Hardlex crystal too. You’ll notice that it has the same LumiBrite that the Baby Tuna has.

Similar to the sawtooth, the SKX0013 was Seiko’s answer to a more affordable Tuna alternative. Thus, it’s a great alternative to consider.

The case is made from stainless steel like the Baby Tuna. It’s polished to be smoother to the touch.

You can take it up 660 feet (200 m) underwater with you. Its unidirectional bezel will help with this. However, many have stated that it can be too stiff to move.

The SKX0013 is an automatic watch. Similar to the Baby Tuna, it runs at 6 beats per second. The manufacturer has even stated it has a 40-hour reserve.

It comes with self-winding, but you can’t hack it, this is where the similarities stop.

Although it’s not black, much of the display is a deep grey. You’ll notice its markings are very similar to the Baby Tuna. They’re both huge.

Being on the larger side, it has a good amount of lume.

If you’re wondering, its display is Hardlex crystal.

Overall, the Baby Tuna is a great dive watch. It does a good job as a cheaper alternative to the Seiko Tuna.

Fortunately, there are a few watches that are also good alternatives. The best are the:
• Seiko SKX0013
• Seiko Sawtooth

(Although its features make the Tuna a great watch, its price makes these two better alternatives to consider).