SEIKO ALIENS WATCH - WHAT WERE THE FUTURISTIC PIECES?

Although Aliens is the second installment of the franchise, the movie terrified audiences more than the first. It’s been over 30 years since it released, and it’s easily a cult classic. You will see peculiar-looking watches on its character’s wrists. Everyone wondered what the Seiko aliens watch was – especially in the knife scene? We’ve got you covered.

Aliens was filmed in the 1980s. Seiko was experimenting a bit during this time. They were coming up with the 7A28 mechanism, which is currently one of their best mechanical quartz movements. They did this to give it an edge against Swiss counterparts.

As the Giugiaro 7000’s name suggests, it hosts the movement. This allows for a chronograph. Its chronograph subdials read the seconds, minutes and hours. If you don’t know what the feature is, it’s a stopwatch.

The timepiece is very futuristic. Seiko hired the acclaimed designer Giorgetto Giugiaro to help with the project. There is a panel on the left side of the device which hosts the pushers to work its chronograph. The buttons on it are placed vertically, which is also not something you will see often.

The 7A28-7000’s face reminds us of an echo-locator. The position of its chronograph sub-dials and outer ring adds to the feel.

It is made of quality stainless steel. That’s why it’s so shiny. The steel helps it remain waterproof as nothing will stick to it. Speaking of water, you can expect it to withstand 100 feet (30 meters). The movie is about deadly aliens, not sea-creatures, so the fact that it can’t handle considerable depths is not a problem.

Its body is silver, while its dial is black. The markers on it are a neon yellow, and the watch hand is bright orange. It’s a watch you’ll notice from across the room.

Remember that the timepiece was introduced decades ago. The original Seiko Giugiaro 7A28-7000 is not produced anymore. The brand reintroduced the device as the Seiko ripley SCED035 and SCED037. Truth be told, there are a few design changes, but they’re not a huge deal.

Although Bishop wasn’t a main character in the movie, his knife scene was memorable. He wore a Seiko 7A28 as well. Unfortunately, you will only get a good glimpse of it in this scene. You don’t have to look close to notice that it’s very futuristic.

The watch is black and made from quality stainless steel. There are eye-catching red accents on it. It is also asymmetric – its dial looks like its popping out of its strap. Yes, the 7A28-6000 was designed by Giugiaro.

As it comes with the 7A28 movement, it is a chronograph device. Its chronograph subdials read the seconds, minutes and hours. There isn’t a panel for its pushers – they’re placed normally. However, they’re larger than usual chronograph starters/stoppers.

It is quite waterproof, as the steel on it was chromium plated. It is also water-resistant. Just like the one worn by Ripley, it can handle 100 feet (30 meters) underwater.

Another similarity that it shares with its brother is the fact that there are newer versions of it. Seiko issued them in 2013. There aren’t many differences, but you get a crown in the 3 o'clock position, and some new markings and texts. We aren’t too fond of the new position of the crown. It used to be at the 8 o'clock angle, which resulted in it slamming into your wrist less.

We have to say, the Seiko SCED003 (the reissued version) has more vibrant colours. It’ll catch your eye more. 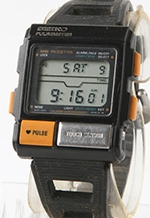 The S234-501A wasn’t designed by Giugiaro. It looks cool, though. We first saw it when the colonial marines came to talk to Ripley at the beginning of the movie. Hudson also wore it when he convinced Bishop to do the knife trick.

The timepiece doesn’t look like a watch. It’s more like a sensor and has one on it. Its chest strap lets you monitor your pulse. Remember that it was produced in the 1980s when such technology wasn’t widespread in watches.

It isn’t made from stainless steel. There is resin all over its body. Resin is more waterproof than steel, so you’re in good hands. The material is also durable.

Compared to the Giugiaros, its display sticks out as it’s a digital watch. The upper corner of its dial reads the day and date, while the bottom half reads the time. As the S234-501A is digital, it’s no surprise that it comes with a couple of features – we’re glad to see an alarm on it.

Seiko doesn’t make watches like this one anymore. There hasn’t been a reissue of it either. We think it looks a lot like a Casio product.

It does not have the biggest case. This lets it fit snuggly on your wrist. It’s not heavy either, which is something you want when fighting aliens.

The manufacturer says that it’s water-resistant. But it isn’t specified how much depth it can handle. If we had to guess, we’d say less than 100 feet (30 meters). 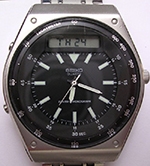 Burke didn’t have the biggest role in the movie, yet he’s essential to the plot. We saw a Seiko device on his wrist. To be honest, it’s the least impressive-looking entry so far.

This doesn’t mean that it isn’t eye-catching, though – it’s a part of a sci-fi movie after all. It comes with an analog display. There is a digital section on the upper corner which reads the time. Seiko doesn’t make watches like it, so it’s interesting to review such a device.

There are rhomboid markers on it that are full of lume. We don’t know if LumiBrite was used, but it’s on its hands too. There are two rings on it. One of them reads the time in a 24-hour format, while the other marks the seconds passed.  There is a chronograph in place. If you’re looking for its pushers, you’ll realize that they’re in a strange position – Seiko decided to place them on the left side.

We’re huge fans of tachymeters. They help you read the distance between two objects. They work hand-in-hand with chronographs. Yes, the H556-5050 comes with one.

You’re looking at a stainless-steel device. It is high-quality and you’ll have a hard time trying to dent it. Its stainless-steel strap is thin. Having a lot of metal on your wrist is not fun – you’ll sweat a lot. Your wrist would be weighed down as well.

If you’re looking to pick up the alien wrist watch, we have some bad news for you – it is notoriously hard to purchase. There are no reissues of it either. Remember that the watch was released in the 1980s, so you’ll have to pick it up from an auction. Depending on where you buy it from, it’ll cost a pretty penny. Finding it an auction is hard too since it’s such a rare watch.

What’s The Best Seiko Watch? 8 Watches You Need In Your Life
By Thomas Vanderlaan

Are There Other Watches?

We don’t know if other models were in the movie or not. Scenes move fast and watches are tiny on-screen. For a lot of the timepieces on our list, we had to pause frames several times to identify them. If you’ve seen Men in Black, you’d know its watches are iconic and futuristic. For the third installment, Hamilton said they made a bunch of pieces, but we didn’t see any on the screen.

You don’t have to be a fan of the movie to think that the watches worn in it are cool. The horror and sci-fi aspects go well together. From all the movies in the franchise, the second installment is our favourite. We love the watches in the movie, as they look great. Seiko did a good job producing pieces that look like they’re from the future.

The watches worn by Ripley are Bishop are the most iconic. The panel on the side that hosts the 7A28-7000’s chronographs makes them look like a radar detector. The colour scheme on its dial is simple but adds a futuristic look too. The 7A28-6000’s asymmetry is what caught our attention the most. Compared to its brother, we think it’s better-looking. Its red and black colourway is also simple, yet packs a punch.

If you liked this post, check out our Facebook page! We review all kinds of watches, including those worn in famous movies.