Relic Watches Review – Did We Uncover A Jewel?

Relic is a product of the famous Fossil Group. The manufacturer produces fashion watches that look expensive – but what about quality and features? In our Relic watches review, we not only answered this but much more.

The Fossil Group created Relic as the watch market had a gap – there weren’t any companies producing “trendy” pieces. Everything was classic-looking.

The timepieces it offers are affordable. However, if you look through its collection, you’d find more expensive units too.

When comparing Relic’s watches to its parents, you might realize that there are striking similarities. But the price differs. Fossil tends to sell units that are more expensive.

We summarized our most notable entries in the following table. 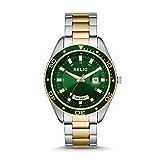 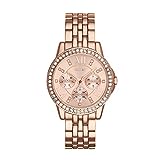 The Most Expensive Looking! 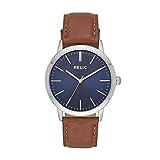 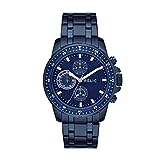 It is a vision in blue. Its blue exterior also makes it look rich.

It’s made from surgical grade stainless steel. This means it is corrosion resistant and waterproof. It looks like there’s some kind of effect on it; it makes the ZR15937’s exterior matte.

You’re looking at a gigantic watch. Its case stretches 2 inches (53 mm) across. Even if you have large wrists, it might look awkward on you. One of the reasons it’s so big is due to the buttons on its sides. They weren’t placed just to spice things up, they work its chronographs.

Two of its sub-dials are chronographs. The other one is its day feature. It’s in the 12 o’clock position.

Speaking of the buttons on it, they’re next to its crown which is covered by a protector. The protector prevents it from snagging on your clothes.

The ZR15937 is not very water-resistant. It can only handle 165 feet (50 meters) underwater. With such a resistance rating, you’ll be able to swim only for short periods.

There are no Arabic numerals on its front. There are markers full of lume instead. We have to say, the pigment present isn’t the brightest. Relic placed the lume on its hands as well.

Inside of it is a Japanese quartz mechanism. The company hasn’t made its caliber public. That being said, it’s smooth.

The glass on its display is not very hard. It is mineral – don’t be too rough with it.

We love the way it looks; it rocks a glossy champagne exterior. It’s made from surgical grade stainless steel, so good luck trying to scratch it.

There’s a metallic effect on its dial. In the right lighting, it sparkles.

There aren’t any Roman numerals. It comes with cylindrical markers across its face. They have jewels in them. Relic says they are diamonds, but this is not true. Our bet is regular glass.

On its hands, luminous pigment is present. The lume is unfortunately not very vibrant.

Unlike the entry above, there are no chronographs. There are three sub-dials, though. One of them tells you the day, the other the date, and the final one the hour.

The glass on its display is mineral.

Inside is a Japanese quartz movement. Once again, Relic hasn’t made the caliber public knowledge. But it moves smoothly.

Quartz is generally more reliable than automatic mechanisms. They come with fewer parts, so there’s less room for error.

It is water-resistant, just not by much. You’ll be able to handle max depths of 100 feet (30 meters).

It comes with day, date, and hour subdials.

The crystal protecting its display is mineral. It’s a dial that has a sun-burst effect. This explains why it’s metallic.

It comes with a leather strap that looks and feels like a million bucks. The band comes with stitching, so it looks handmade.

The leather band and sun-burst effect go well together. The ZR77298 looks ultra-classic.

Inside is a Japanese quartz movement. No, its caliber is not known. That being said, it moves like butter.

It has a resistance rating of 100 feet (30 meters); occasional splashes is all it’ll be able to handle. Either way, getting it wet won’t be fun. If you’ve read our reviews before, you’d know how “anti-waterproof” leather is.

Thin rectangular markers are on its face. Its hands are also pin-sharp. Considering their size, there is no pigment in place. You’re not getting lume on its markers either.

It’s the only entry on our list with a leather strap. 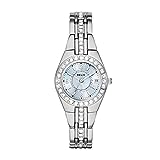 The timepiece is dainty. Its case stretches 1.06 inches (27 mm) across. If you are a lady with larger wrists, it might not look that great.

We’re a fan of its case shape. Rolex and Omega are known for using it. The fact that it’s made from quality stainless steel makes it look good too. It can catch the light since it’s highly polished.

Its bracelet is elegant. You’ll fool people into thinking the timepiece is jewelry. The fact that it has crystals all over its bezel is the icing on the cake.

What’s the glass on its display? Exactly what came with its siblings – mineral.

There is lume on its dial. There isn’t a lot of pigment, though. It glows slightly on its hands and markers.

Speaking of the markers, they’re a mixture of cylinders and Arabic numerals.

In the 3 o'clock position, a calendar is present. The date was bolded well. But you might be squinting to read it, as the watch face is so tiny.

The ZNR12161 is resistant to 165 feet (50 meters). With such a resistance rating, only short periods of swimming can be done.

Since it’s so small, it’s no surprise that the movement inside it is quartz. Automatic watches have a lot of parts. It uses gears to show the time. Relic wouldn’t have been able to fit so much in such a tiny frame.

Of course, its Japanese quartz mechanism moves like butter.

You can pick the ZR12161 in quite a few colours and designs. We’re fans of the silver as it looks the most luxurious.

The Most Expensive Looking!

Are you a fan of Rolexes? The Men’s ZR12612 is just the watch for you. Its gold and green colourway along with its stainless-steel body, give a very Rolex-feel.

We love the green on its face. There’s a metallic effect to it which makes the watch sparkle. The effect is on its bezel as well.

There are no Arabic numerals on its face. You’re getting rectangular markers full of lume instead. The pigment sadly isn’t the most vibrant. The manufacturer hasn’t made it public about the type of lume they use.

Speaking of its face, you don’t have to look closely to notice its peculiar calendar set-up. The date is on a scroll-like sub-dial on the bottom, with the date placed separately in the 3 o'clock position.

The unit is made from high-quality stainless steel. So the watch looks glossier and more expensive.

It’s not very water-resistant. How do you feel about a 100 feet (30 meter) resistance rating? A couple of splashes is all it’ll able to handle.

Yes, a Japanese quartz mechanism is inside it.

What about the glass on its display? It is mineral glass. 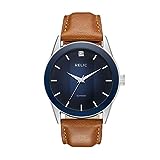 The Rylan has a leather strap. It’s not thick, so it doesn’t collect a lot of sweat. The band feels like a million bucks as Relic used genuine leather. There’s some stitching on its sides which look hand-done.

It has a wide, circular watch face. You’ll be able to read the time without squinting. How big is its case, though? It’s gigantic at 1.77 inches (45 mm).

The glass on its display is mineral. We’ve seen it several times in our review. You’ll be reading the time via rectangular markers instead of hour markers. They’re full of lume. The pigment is on its hands as well.

There’s a gradient effect on its face. It contrasts against the brown on its strap – the ZR77294 catches eyes from across the room.

It can handle 165 feet (50 meters) underwater. Although you can take it swimming, you might not want to get it wet. Remember that once leather gets soaked, it doesn’t dry for hours.

What’s the mechanism inside? Japanese quartz.

Relic is a fan of placing crystals into units. The Rylan is no different. The glass is placed at the 12 o'clock angle. The company promises that it’s a genuine crystal. But we don’t think so. The device is too affordable for that.

Now that you know what the best Relic watches are, let’s answer some questions you may have.

Where Are Relic Watches Made?

Considering the price of the units, it shouldn’t surprise you that the watches are made in China. The majority of Fossils’ watches are as well.

The manufacturer produces fashion pieces. If you’re a watch snob, you probably dislike fashion watches. They’re timepieces that focus more on looks than features and quality. That’s why the brand isn’t the most respected by enthusiasts.

The quality of its units is not bad – they’re pretty decent. They just don’t stand a chance against more expensive alternatives.

You get 12-year warranties for every item you purchase. You won’t find such deals from alternatives.

Of course, there are certain limitations to the warranties. This is true of the coverage by any brand, though.

The warranty period lasts from the date of purchase, not the date you pick the item up.

Once you send your watch to Relic, they’ll either fix it free of charge, or you’ll get a replacement without having to pay.

The manufacturer is a product of the giant Fossil Group. This alone tells you that its pieces are worth the purchase.

Fossil formed Relic as they wanted to produce affordable watches that also look modern. In fact, its pieces are more affordable than Fossil.

When it comes to the entries we talked about, it’s clear why the ZR15937 earned our number 1 spot. Not only does it look stunning, but it comes with functional features like chronographs. Don’t forget that its price is tempting as well.

Related Posts
A Fossil Watch Review - Uncovering Their Pieces
Author
Thomas Vanderlaan
When Thomas Vanderlaan was a child, the moment he learned about mechanical watches he was hooked. His first love being mechanical watches, he decided to pursue a career in engineering as he was entranced by the science behind its gears. As the years passed, his passion grew. Although he worked a hectic career as an automobile engineer, he’d always collect watches during his spare time.
Affiliate links / Images from Amazon Product Advertising API. Wrist Watch Pro is a participant in the Amazon Services LLC Associates Program, an affiliate advertising program designed to provide a means for website owners to earn advertising fees by advertising and linking to amazon (.com, .co.uk, .ca etc) and any other website that may be affiliated with Amazon Service LLC Associates Program. As an Amazon Associate I earn from qualifying purchases.