A Moment in Time - History of Pocket Watches 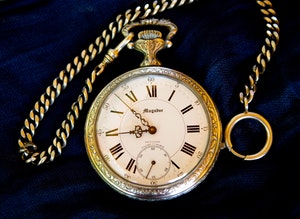 Until the Ancient Egyptians learned how to separate day and night into 24 hours, time was of no significance to man. Initially worn by members of the royalty such as the Duke of Modena, this led to the emergence of the first pocket watch during the 15th century.

The 16th century saw a hive of activity in the field of timepieces thanks to iconic German watchmaker Peter Henlein who created the first simple spring devices. As an avid watch connoisseur with an eye for detail, I have outlined the history of pocket watches, its relevance in society and why they are so popular among watch fiends.

Who Made the First Pocket Watch?

Peter Henlein from Germany invented the first early pocket watches at the start of the 16th century. By the early 1520s, he introduced his spring loaded design in England and Scotland. By that point the stem wind pocket watch was on its way to playing an integral part in society.

Early models were produced from steel instead of precious metals while blacksmiths were also responsible for producing all manner of timepieces. Early watches tended to be boxy, quite large and egg-shaped in order to provide dial protection.

During the mid 1600s, modernization in engineering, screws, mechanical engineering and mainspring devices ensured the shape evolved allowing for a less bulky and much smaller timepiece. Utilizing a brass lid with only an hour hand, these models were connected via a chain around the neck without it having to require falling weights.

Inner spring workings gave the opportunity for the creation of minute hands later on but it was the inaccurate workings of the design that plagued the early watchmakers build. After 1750, lever escapement changed all that whilst enabling watches made them only lose a few minutes each day rather than hours.

The quantity of wheels in mechanical movements was a major improvement demonstrating the pocket watch didn't have to be wound up at least twice a day. By the 18th Century, rubies were included signifying bearings that proved to be an attractive and expensive product.

This decreased drag and increased precision while reducing wear and tear. Decorated with countless jewels, it was usually worn as a pendant around the neck like a chain. However, it wasn’t until the 1800s that the pocket watch transferred to the inside pocket.

What Years Were Pocket Watches Popular?

Considered to be the ultimate male fashion symbol, developments in the pocket watch started to gain increasing popularity in England thanks to King Charles II.

The Influence of King Charles

In 1675, with his waistcoat fashion, Charles II was certainly on to a winner as they began to be placed inside the vest pocket. With that in mind, this provided a novel way of carrying which cottoned on across Italy and Europe as well as the Americas.

Ergonomic, and flattened out, sharp edges were taken out to avoid damage against the waistcoat fabric. Ideal for the dapper gent, everyone wanted a (time)piece of the action. This saw ornate pocket watch designs and ostentatious materials introduced with diamonds and countless jewels. Glass was also used in early designs, preventing scratches to the watch face.

Meanwhile, pocket watches were wound via a turning key. Normally turned by hand, this remained the norm until the late 18th century when self wound dials and the sub second dial came to fruition. Consequently, these timepieces gave birth to one of the most sought after high-end luxury items that the elite could only purchase.

Even women were getting in on the act, wearing this must have accessory as a stylish pendant around the neck during this period. This changed pocket watch use as we know it, not to mention its portrayal as the ultimate fashion symbol.

Why Was the Pocket Watch Important?

By the 1900s, advancements in time zones and the requirement for precise time measurements meant accuracy and time became integral to many people including railroad workers.

The manufacturing effort saw pocket watches play an important part during the Industrial Revolution as rail lines were constructed across North America and Europe. Workers become more dependent on how to tell the time, preventing any unnecessary crashes or derailments.

Regrettably, the famous Ohio train wreck at the end of the 19th Century demonstrated that accurate timekeeping was required. Involving two train engineers whose pocket watches were telling the time incorrectly (4 minutes apart to be exact), the first mail railroad service collided with another train close to Oberlin.

After a thorough investigation, it was revealed the conductor did not take his watch out of his pocket leading to the crash. As a result, the train company took on a jeweler to oversee watch use on the tracks.

In fact, information extracted from the inquiry uncovered workers didn't employ any time or watch standards. The company unveiled a new pocket watch dedicated to railroads that was accurate to within half a minute each week which has now become a prized possession for many watch collectors.

At the onset of World War I, there was a sharp decrease in pocket watches as soldiers found them impossible to be carried on the battlefield. A strap was produced that could be attached to the wrist. These so-called “trench watches” soon became de rigeur.

During the Roaring 20s, men took a shine to this vintage item wearing them as an accessory alongside their three-piece suits.

Thanks to mass production and new technology, every part of society from the upper classes to working classes wanted to pocket this little number. By the Victorian era, the American Watch Company started to produce in excess of 50,000 reliable watches.

The public and watch world were soon lapping them up making them a firm fixture for many decades. It was only after wristwatches were manufactured during World War I that standard pocket watches started to lose their level of popularity.

By 1969 with the introduction of Seiko's Astron watches in the market, the first quartz watch quickly brought about a marked decline. Yet, consumer attention drastically changed. The pocket watch was soon replaced with a new electronic period which featured new styles and a reliable, high-quality wrist watch.

Nevertheless, pocket watches have been an integral part in the recent resurgence of this item remaining a timeless must have accessory. Returning at the start of the post war years, the Zeitgeist was captured perfectly during this period where three piece suits and fashion were all the rage again.

Style and the Metropolitan Man

In today's world, trendy men have stepped back in time reaching for pocket watches to accentuate their outfits. Acting as the epitome of fashion, this luxury item offers panache, style, water resistance and more.

Fast forward to 2022 and there are many who find favor in Victorian fashion and other style movements where pocket watches act as a refined style piece. You might say the pocket watch spearheaded the way for the first ever wearable smart tech of its day.

Related Posts
Sapphire vs Mineral vs Acrylic Crystal vs Krysterna
Making A Splash: Watches Water Resistance Chart
Water Resistant vs Waterproof: The Ultimate Guide
Water Difference a Dive Watch Makes: Guide to ISO 6425
How to Choose a Watch - All the Dos and Don'ts
How To Set And Wind A Watch – A Beginner’s Guide
Buckles, Closures, & Watch Clasp Types – A Look At Them All
Why Do People Wear Watches Upside Down? Several Reasons, Actually
Do Watches Loosen Over Time? The Answer Might Shock You
Why Do Watches Have Jewels? No, You Can’t Sell Them
How to Wear A Watch? 8 Rules to Live By
Do Expensive Watches Tick?
Do Watches Get Scratched Easily? (What You Need To Know)
Do Watches Attract Sharks? Myth or Fact?
What Hand Does A Watch Go On? Answering An Age Old Question
The Ultimate Watch Gang Review - Let’s Unbox the Brand
Parts Of A Watch - Your Must-Have Guide
How To Set Time In A Digital Watch & More: A Newbie’s Guide
When Were Watches Invented? An Introduction To Watch History
Do Bulova Watches Have Real Diamonds? What Did We Uncover?
Your Watch Says More About Your Status Than You Think (So They Say)
An Introduction To The Watch Movement Types (Newbie’s Guide)
Do Watches Need Energy to Work? A Look at Their Insides
How To Adjust Your Watch Band - An Easy Fix
Author
Simon Lazarus
As an avid watch fiend, Simon Lazarus isn’t any ordinary watch collector. Since the dawn of time (well almost), his obsession with timepieces has seen him establish a bijou collection across his extensive travels with his wife and two darling daughters including in the US and Dubai. With an extensive back catalogue of published work on timepieces for numerous sites globally, watches are moments in history. He certainly makes time to capture the true essence of watchmaking with an eye for impeccable detail showcased in his plethora of watch articles across numerous sites. With a well formed selection focusing on Swiss made as well as emerging microbrands that will no doubt gain in value, time is almost as precious as his two young princesses!
Affiliate links / Images from Amazon Product Advertising API. Wrist Watch Pro is a participant in the Amazon Services LLC Associates Program, an affiliate advertising program designed to provide a means for website owners to earn advertising fees by advertising and linking to amazon (.com, .co.uk, .ca etc) and any other website that may be affiliated with Amazon Service LLC Associates Program. As an Amazon Associate I earn from qualifying purchases.