Orient Triton Review - Did We Find The King of The Sea?

The Triton is one of the best dive watches for its price. It’s amazing what Orient has done with it. We’ve touched on all the great things about it in our ultimate Orient Triton review.

If you can’t tell, we’re major fans of the timepiece – it looks like a million bucks. We’ve summed its specs up in the table below.

The device looks expensive. It comes with a face that’s reminiscent of the Rolex Submariner. It’s shiny as it’s made from quality stainless steel.

The watch is quite big. Its case stretches 1.71 inches (43.5 mm) across. If you have smaller hands, it’ll look odd. The timepiece is not only big, but it has some heft to it. When it comes to watches, this is what you want – the more weight it has, the more premium it will feel.

Its dial is full of large markers. They’re rhomboid, so they’re packed with luminous pigment. The Triton has the company’s logo in the 6 o'clock position. We like how Orient’s logo looks, so we don’t mind it being there.

Its silver and black body is chic. However, there are variants of it that come with other colourways. One of our favourites is the black and gold.

As mentioned, its dial is full of luminous pigment. There are countless lumes out there – we unfortunately have no idea what the one on the Triton is. It works well in the dark. It’s especially great underwater. As its dial is pitch-black, the pigments on its markers pop.

You might not notice its calendar. Orient made it small. They also placed it at an awkward angle. We would’ve loved it if the company made it read the day as well as the date.

Something you will notice is the sub-dial on the upper right corner. It’s the timepiece’s power reserve indicator. We’ll talk more about it later.

The crystal on its display is tough. You’re getting sapphire on it. Sapphire is the toughest glass out there. The one on the Triton has extra scratch resistance.

Its case is huge, so make note if you have smaller wrists. Also, make note of the position of its crown. We love that it’s in the 4 o'clock position. This means it’ll slam into your wrist less. It’s a feature that manufacturers are placing in many of their dive watches.

Its crown is edged. This makes it easier to use. It’s made from the same stainless steel on its body. As the timepiece is a dive watch, you’re looking at a screwed down crown.

The shark-teeth on its bezel pay homage to the Submariner. They don’t have a purpose, other than making its bezel easier to rotate – more on this later.

Unfortunately, its case back is not exposed. As the Triton is automatic, we would’ve loved to see its many gears move.

It has several steel links in its bracelet. This is why it’s so heavy. Its strap is kind of wide. This makes it look premium, but having a wide bracelet on your wrist isn’t the best – you’ll be sweating.

The device is water-resistant. It can handle 660 feet (200 meters) underwater. If you look at its dial, you’ll see “Diver’s 200 M” on it. This means you can dive with it on. Orient built the timepiece to be ISO 6425 certified.

As it’s made from quality stainless steel, you don’t have to worry about corrosion. Its dial is full of lume, so reading it underwater will be a breeze.

We mentioned that its bezel can be rotated. When it turns, it ticks. This makes it act like a timer. It lets you know when it’s time to get out of the water.

The Orient Triton dive watch has a sapphire window. The crystal is impact resistant, letting you withstand 660 feet (200 meters) of water.

The timepiece is automatic. This isn’t a surprise as dive watches usually come with the movement. It has the 40N5A mechanism inside. This results in 22 jewels between its gears and a 40-hour power reserve. Its jewels are made of glass. Automatic watches have gears in them. Friction wreaks havoc on them if jewels aren’t present. 22 is a little more than the standard amount.

Its gears move with the energy from your arm. Once off your wrist, they’ll move through any energy they’ve collected. How long they can do this is decided by the watch’s power reserve. Its power reserve indicator tells you how much time you have until the 40 hours are up.

As they have so many gears, automatic devices usually come with exposed backs. We’re disappointed that the Triton doesn’t come with one.

We’re fans of the timepiece. If you’re looking to purchase it, make note of how well it performs against alternatives. 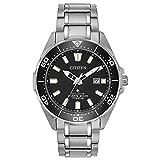 At first glance, you might think that the BN0200 looks a lot like the Triton. This is as they’re both paying homage to the Rolex Submariner.

The Citizen watch has a black and silver body with rhomboid markers full of lume. The pigment is on its hands too.

There aren’t any shark-like teeth on its bezel. They’re more “fin-like”. We’re happy to say that its bezel rotates.

The timepiece is huge. Its case is 1.69 inches (43 mm). It’s also got a heft to it – it’s a 15.98 ounce (453 gram) device. This is mainly due to the quality of stainless steel on it. Its body isn’t fully made from steel, though. The material on its case and bezel is Super Titanium. It’s tougher and superior at resisting corrosion and rust.

It can handle as much water as its counterpart. It’s ISO 6425 certified. Unfortunately, it’s not an automatic product. It comes with a quartz mechanism – we have no idea what the name of its specific movement is.

You might like to know that the BN0200 is solar powered. Citizen says that any and every light source will charge it.

The crystal on its front is not that durable. There’s a mineral in place. Mineral is probably the weakest glass out there, so be careful.

There’s a calendar on it. It only reads the day’s date.

Unlike the Orient automatic diver, you don’t get a crown in the 4 o'clock position.

It also comes in multiple styles. There is one that comes with a rubber strap. Rubber is more water-proof than stainless steel. 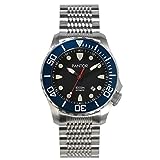 The Seahorse is a superior diving watch. It can handle over 3000 feet (1000 meters) underwater. It does this by coming with many more features than the Orient Triton. To begin with, you get a helium valve. It relieves any pressure built up.

There’s also Swiss Super Luminova on its display. It’s one of the best pigments out there.

Of course, the timepiece is made from quality stainless steel. There’s also a rotating bezel and crown in the 4 o'clock position.

It has a sapphire window. As you know, it’s very tough. It helps the Seahorse withstand over 3000 feet underwater as well.

Although its body is made from stainless steel, there are inlays of aluminum. This is the texturing you see on its strap. They make the watch more comfortable to wear.

It has a Japanese automatic movement. The ultra-accurate Miyota 9015 is inside of it. It comes with 24 jewels and a 42-hour power reserve. It’s better than the Orient Triton’s mechanism. The movement also comes with self-winding and hacking.

As it’s an automatic watch, we would’ve loved it if its case-back was exposed.

The timepiece is a superb dive watch. It not only can handle a lot of water, but it looks good too. We’re fans of how expensive it looks. This is as Orient did a good job paying tribute to the Rolex Submariner.

All in all, we think the Triton is one of the most affordable dive watches around. Its competitors are great, but the Seahorse is more expensive than it. And the Eco-dive doesn’t come with as many features.

Related Posts
What’s the Best Orient Watch? 7 Timepieces Made with Style
Affordable And Good Looking, Who Is The Orient Bambino? (Your Must-Have Review)
Orient Mako II - Just Another Tribute Piece?
Author
Thomas Vanderlaan
When Thomas Vanderlaan was a child, the moment he learned about mechanical watches he was hooked. His first love being mechanical watches, he decided to pursue a career in engineering as he was entranced by the science behind its gears. As the years passed, his passion grew. Although he worked a hectic career as an automobile engineer, he’d always collect watches during his spare time.
Affiliate links / Images from Amazon Product Advertising API. Wrist Watch Pro is a participant in the Amazon Services LLC Associates Program, an affiliate advertising program designed to provide a means for website owners to earn advertising fees by advertising and linking to amazon (.com, .co.uk, .ca etc) and any other website that may be affiliated with Amazon Service LLC Associates Program. As an Amazon Associate I earn from qualifying purchases.