The Men in Black Watch – What Did the Agents Wear?

Who doesn’t love Men in Black? It’s jam-packed with comedy and action. Everyone’s wondered what the men in black watch is – it’s one of many Hamilton Venturas used in the franchise. They look out-of-this-world, and we’ve talked about them below.

We have summarized the timepieces in the following table. 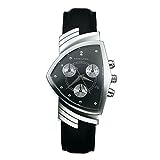 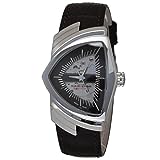 Men in Black Watches - A Review

The classic quartz Ventura is seen on Agent J’s wrist. The first thing that’ll catch your eye is its triangular case. It’s space-ship like, which goes with the MiB theme. It is also at an angle.

The timepiece has a 1.22 inch (31 mm) case. You don’t get regular looking markers. They are synthetic jewels with bands on the end– they look like antennas. To fit the angled case, they were placed asymmetrically. In the watch industry, symmetry is a major part of horology.

Sapphire crystal is on its window. It is the toughest out there. Considering Agent J’s line of work, this is the best window you could want.

You’re looking at a water-resistant device. It can handle depths of up to 165 feet (50 meters).

Premium leather is on its strap. It is alligator-skin. Its strap is pretty thin – wearing a hefty device doesn’t help when you’re chasing aliens down.

Its movement is Japanese Quartz. When compared with automatic mechanisms, it has fewer parts and is made in a more automated process. This makes it more reliable.

Hamilton isn’t a luxury brand per se, but it’s known to produce quality timepieces. It delivered with the H24411732. It costs around USD 850 but looks like it costs a lot more.

The Ventura in MiB 2 is more futuristic. We think it looks better than the one just discussed. We’re bummed that Agent J gave the MIB watch to the aliens living in the locker.

It’s a bit larger than the H24411732. When you look at its dial, you’ll notice that there aren’t any bands attached to the synthetic jewel markers. The watch also has 3 pushers on its side. They aren’t there just to spice things up – they work its chronograph. Chronographs are stop-watches. They record the milliseconds, seconds and minutes passed. You can imagine how useful they would be for agents.

Its strap is leather. It’s just as high-quality as in the classic quartz Ventura. It’s not thick. Leather bands that are thick collect a lot of sweat.

The device can handle 165 feet (50 meters) underwater. Like its brother, Hamilton says that recreational swimming is fine, just don’t snorkel or dive with it. In case we didn’t mention – leather isn’t very waterproof. Yes, it looks and feels luxurious, but it takes forever to dry.

If you find the placement of its asymmetric markers hard to read, you’ll enjoy the circle within its dial. It acts as a small clock-face.

Its movement is Japanese quartz.

Its case is an enormous 1.83 inches (46.6 mm). It is triangular, but it has more of an oval shape. Just like the other 2 entries, there is sapphire crystal on it.

You might have trouble reading the time. The markers on it are dauphine. Considering the angle and shape of its case, they’re not the easiest to read. Its seconds’ hand is small, making telling the time even harder.

The material on its strap is not leather. It is rubber. Although this doesn’t make it look premium, rubber is more waterproof. It is also more durable.

Something different about the XXL is its automatic movement. The mechanism is Swiss, so a lot of craftsmanship has gone into it. There is a skeleton back– you’ll be able to watch its gears move.

Although MiB: International had new actors, something that stayed the same was the presence of Hamilton’s Venturas. Chris Hemsworth, aka Agent H, was seen wearing the Ventura Auto. We first saw a glimpse of it in the movie’s trailers.

There is a leather strap in place. It’s high-quality and feels amazing. Its band is thin, so you don’t have to worry about sweating. The leather on it is not embossed, so it looks like rubber.

Water-resistance is promised. It can handle 165 feet (50 meters). You can swim with such resistance. However, all you’ll need to fight aliens is the ability to withstand dunks.

The Ventura H24515591 is automatic. There is a Swiss automatic mechanism inside. We’re glad to see a skeleton rear. We’re also glad that its front is exposed. You’ll easily be able to watch its gears move.

Did we mention that durable sapphire is on its window?

Along with Chris Hemsworth, Tessa Thompson was a main character in the ‘International’ installment. No surprise, she rocked a Ventura timepiece, though hers was more dainty. It was the same Ventura we saw in Men in Black 1 – The classics quartz (H24411732).

What did you think about our review? You now know what timepieces are the men in black wrist watch. Hamilton provided some futuristic pieces to the franchise – that’s why so many people were interested in them. If more Men in Black movies come out, we’re sure the brand will provide Venturas.

From all the watches we ran through, the Ventura Auto in Men in Black 3 is our favourite. It looks the most sci-fi. We’re also a sucker for a good swiss automatic movement.

Related Posts
Hamilton Khaki King Review - Look Good Outdoors
Author
Thomas Vanderlaan
When Thomas Vanderlaan was a child, the moment he learned about mechanical watches he was hooked. His first love being mechanical watches, he decided to pursue a career in engineering as he was entranced by the science behind its gears. As the years passed, his passion grew. Although he worked a hectic career as an automobile engineer, he’d always collect watches during his spare time.
Affiliate links / Images from Amazon Product Advertising API. Wrist Watch Pro is a participant in the Amazon Services LLC Associates Program, an affiliate advertising program designed to provide a means for website owners to earn advertising fees by advertising and linking to amazon (.com, .co.uk, .ca etc) and any other website that may be affiliated with Amazon Service LLC Associates Program. As an Amazon Associate I earn from qualifying purchases.