MEGIR WATCH REVIEWS - AN UNFAMILIAR FACE FROM THE EAST

If you want a good-looking watch, Megir’s a brand that’s worth your time. They’re not a popular brand, which is due to a couple of reasons. Let’s take a look at them in our Megir watch reviews below.

They are a Chinese brand that entered the game in 1997. To be honest, we didn’t know who they were. One of the reasons they’re so mysterious is that they mostly sell their products online. This is especially true for Amazon and e-Bay.

Like many of the brands we reviewed, you’re looking at another brand that focuses on fashion pieces. Unfortunately, fashion watches get a bad rep. For the most part, they’re good. But is this true for Megir’s pieces? Let’s find out.

Their timepieces are exceptionally cheap. The Megir watch company places beauty and affordability over everything else.

We could dive right in. However, getting to know our favourites from the selection below is a good move. 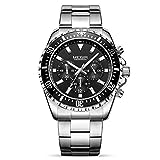 As we established, the brand produces affordable pieces. However, the MS-2064G looks like a million bucks. This is due to it being a Rolex Submariner dupe. Seriously, compare the two.

The MS-206 is not as water-resistant as the Submariner. The timepiece can only handle a 100 foot (30 meter) dip underwater. Megir even warns for you to not swim too deep with it on.

Although not the most water-resistant, it’s quite waterproof. It’s made from stainless steel. The material easily keeps water at bay. It’s also pretty durable, so good luck trying to scratch it.

You get three sub-dials on the MS-206. They host its chronographs, which are stopwatches. They’re appreciated, but we have an issue. The sub-dials are the same colour as the dial, which makes them difficult to read.

Mimicking the Submariner, it’s not a surprise that the device comes with a luminous dial. There’s luminous paint all over its rhomboid markers. The thing is, the pigment isn’t the brightest.

There’s lume on the watch’s hands too. However, it’s not that luminous either.

The timepiece is cheap. Timepieces of this price usually doesn’t come with automatic mechanisms. We weren’t surprised to hear that Japanese quartz is in place.

You also see mineral glass in watches its price. The brand decided to step things up and place a Hardlex crystal instead. It’s similar to mineral but is harder. It’s Seiko’s creation and is widely seen in their pieces.

We have to say, the Ms-2064G is big. Its case stretches 1.811 inches (46 mm) across, so make note if you have smaller wrists. Speaking of its case, it’s made from alloy, unlike its strap.

To be like the Submariner, you’d expect its bezel to rotate. However, Megir decided to disappoint us. 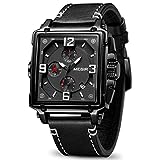 How often do you see rectangular watches? The ML2061G’s rectangular case makes it a great dress watch. Its case isn’t made from stainless steel, but alloy instead.

The timepiece’s strap isn’t stainless steel but is leather. Considering the ML206’s price, expecting quality leather would be crazy. It doesn’t feel bad but does not feel expensive. The strap is pitch-black, similar to its body.

With one look at its display, you’ll notice three sub-dials. They are its chronographs. As you’ll see, every Megir watch on our list comes with the feature. We’re not mad, chronographs are handy. But we have a complaint. The chronograph subdials on the ML206 are small. You’ll be squinting to read them.

Its calendar is small too. To be honest, we didn’t even know it was there. It’s tucked away in an awkward position.

Just like its brother discussed above, the ML206 is water-resistant. It can’t handle a dive underwater, but it’s good to go for up to 100 feet (30 meters).

We’ve said this before in our other watch reviews, and we’ll say it again – keep leather watches away from the pool. Leather is hard to dry, as you know.

Is it luminous? Only its hands. The pigment present isn’t the brightest. The fact that its hands are really small doesn’t help either.

We’re glad to say that it has hardlex again. When comparing crystals, you’ll see that it’s better than regular mineral.

What else? Well, the timepiece is Japanese quartz. This is pretty standard. 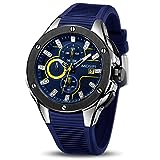 The MN2053G has a silicone strap. Silicone is a very water-proof material. Surprisingly, the MN205 isn’t very water-resistant. Like the other 2 discussed, it can only handle 100 feet (30 meters) underwater.

Being so waterproof, the MN205 is great for the outdoors. Nothing will stick to it, even dirt.

Its case is alloy. However, it’s not the ordinary kind. It’s brushed, so the timepiece not only looks chic but collects less scratches.

Remember how we said all the watches on our list come with chronographs? We weren’t lying. The MN205 is another entry with the feature. The buttons to stop/start it aren’t as in-your-face as in its siblings, though.

We have to talk about its yellow and blue design. We dig it. It’s retro and makes the MN205 easier to read. The fact that its dial is luminous would make things even easier, but we’re disappointed to say that its pigment isn’t that luminous.

It looks like there’s a trend going on. No, we’re not talking about the chronographs or the less-than-great luminosity – we’re talking about the small calendars. The one on the device is minuscule. At least it’s not placed in an awkward position like in the ML2061G-BK-1.

The timepiece is quite large. Its case stretches 1.811 inches (46 mm) across. If you have smaller wrists, it’ll swallow you up.

The timepiece also has a hardlex crystal. You already know how we feel about it.

If you’re expecting a movement other than quartz, get ready to be disappointed. The MN205 is a Japanese quartz device. 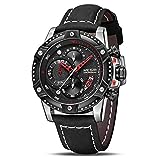 We’re major fans of its red and black colorway. The red hands not only look cool, but they contrast sharply against the black dial. The fact that there are red accents throughout just wraps things up.

If you look at its dial, you might think that it’s busy. There is texturing and multiple sub-dials in place. Speaking of its sub-dials, you probably know what they are. They host the L213’s chronographs. Just like the other Megir chronograph watches we’ve reviewed, they read 1 hour, 1 minute, and 1 day.

It has a calendar feature on its display. Its calendar is different from the others on our list. It’s pretty long, showing the current date as well as the days that are about to come. It’s neat but is positioned awkwardly. Seriously, look at it. You’ll be straining your neck trying to read it.

You might not think that its case is metal. Megir went for a different look with the L213, incorporating textures to it. That’s why its bezel looks like fabric. Don’t let this fool you. It’s alloy that has been made to look this way.

Speaking of textures, did you notice its dial? There’s a grainy, concrete effect all over it. It’s eye-catching, to say the least.

Unlike its siblings, the watch is not luminous. The luminous pigment is not even on its hands. Thankfully, the sharp red against the black makes the watch easy to read in dim settings.

It’s water-resistant. It can handle a 100 foot (30 meter) dip underwater. You probably won’t want to hit the pool with it. Remember what we said about leather? The L2130GS-BK-1 has a leather strap. If you’re wondering how it feels, it’s not that great.

Of course, you’re looking at another Japanese quartz device. Its window is made from hardlex crystal too. 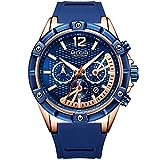 We have to say, the MN2083G is the best-looking watch on our list. Blue and rose-gold is a combination you don’t see that often. The fact that its rose gold accents are polished makes them even more eye-catching.

Not only is it the best-looking watch on our list, but the MN208 looks expensive too. Considering that it’s one of the cheapest watches we’ve reviewed, this is noteworthy.

Although it looks like a million bucks, you might not be a fan of its strap. It’s silicone, which dampens its premium feel. However, we’re not too mad as silicone is extremely waterproof. With a timepiece as good-looking as the CX-MN208, you don’t want anything getting it dirty.

There are 3 sub-dials on its display. Do we have to introduce them to you? They’re exactly what you think they are.

The timepiece has lume in place. The pigment is in its hands and markers. But as we know, the luminous paint Megir uses isn’t the best.

Things would’ve been better if the markers and hands were larger, making for a larger canvas to shine on.

Like the other entries on our list, the MN208 also has a calendar. It continues the trend of having a calendar so small that we didn’t even notice it. Look at its dial – you probably won’t spot it. For some reason, Megir likes placing calendars in awkward positions – the rose gold beauty is no exception.

We’re glad that the brand produces water-resistant pieces. Considering that their watches are very affordable, this is appreciated. If we had any complaints, we’d want more water resistance out of their watches. However, 100 feet (30 meters) of resistance is fine. Like the rest, the MN2083G can handle such depths.


You already know what its movement is. You’re looking at a Japanese quartz device. You can also guess what the crystal on its dial is. It’s Megir’s favourite Hardlex.

Its rose gold and blue design.

Megir watches are great if you’re looking for affordable timepieces, but not so much if the quality is important to you. You may have a couple of questions about them. Why don’t we try answering them below?

Are Megir Watches Worth It?

The brand’s pieces are quite low-cost. They offer some of the cheapest watches we’ve ever seen. It isn’t surprising that the megir watch quality isn’t the best. If you purchase any of the 5 we ran through, the chances of them breaking soon are high.

The thing is, you could pay a bit more and get a higher quality piece. Brands like Seiko and Citizen are known to produce affordable watches, which look great but last a while.

Where Are Megir Watches Made?

More affordable brands produce their pieces in China. It’s not surprising that Megir does this too. After all, they’re based in the country.

Brands like them specifically produce their watches in Hong Kong. Although they haven’t made this information public, we’re pretty sure that Megir’s products get made there.

Where Can you Buy Megir Watches?

You’ll find it hard to purchase their pieces outside the internet. You can order directly from their site. However, sites like e-Bay and Amazon exist. You’ll find most of their watches on them.

As their watches look stunning, they’re commonly sold on social media. Instagram shops are notorious for selling their products. Unfortunately, they do this at inflated rates.

Do They Have Any Expensive Pieces?

Yes and no. They’re not really “expensive”, but they’re not as affordable as the entries on our list. These watches are ones used to target the Japanese market. They’re higher-quality than their regular counterparts, though.

What’s the verdict? Megir is known for its cheap watches. With one look at the timepieces on our list, you’ll see that they’re not the best quality. However, they look quite dashing. After all, the brand is notorious for their fashion pieces.

So, what did you think about our review? If you’d like to see more good-looking watches, be sure to check our Pinterest out. We regularly update it with all kinds of pins.