The John Wick Watch - What On Earth Did He Wear?

The franchise follows John’s escapades. In the first movie, we’re shown his backstory and how dangerous he really is. It followed him seeking revenge on the bloodthirsty Russian Mafia that he once worked for as they try and assassinate him.

The second movie from followed John and his adventures in Italy’s crime scene, while the third and final movie focused on John having a price on his head after killing a member of the international assassin’s guild.

In each movie, something that stayed the same was John’s watch. This is why there are so many articles, guides, and videos on what exactly he wore.

Not that we’re trying to be unoriginal, but we’ll be looking at the John Wick watch as well. So read ahead if you want to learn more.

So What Does He Wear? 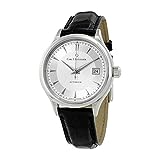 John Wick is a man of class which is why he wears the Manero AutoDate, from Carls F. Bucherer. Carls F Bucherer is a high-end brand in the watch world which is why you’ll have to pay an arm and a leg for their pieces.

Arguably, what has drawn everyone into the watch is how John Wick wears it. He places its dial towards the inside of his wrist. Although strange, it’s quite smart considering the man is always getting into fights. If the watch was placed normally, it would’ve got bashed into a billion pieces, don’t you think?

With that out of the way, let’s look into its specs:

The watch has a Sapphire display. After all, it’s incredibly expensive, so this is expected. The sapphire makes the Manero durable as its display can take quite a beating. (This doesn’t mean it can withstand John Wick’s escapades though).

As he’s always on the move, the Manero’s anti-glare display is perfect.

The watch oozes luxury. It comes with an Alligator strap. The strap comes in a range of colours, but we see John rocking the black version.

The Manero is a Swiss Automatic watch. Considering his lifestyle, this is the best watch he could own as it takes care of itself. He’s always on the move, so its 42-hour power reserve won’t be much use to him. That being said, a 42-hour power reserve is pretty useful, at least to the everyday user.

He doesn’t have to worry about his time being inaccurate as the Manero comes with 25 jewels. This keeps its gear moving smoothly.

His watch comes with a degree of water resistance. Unfortunately, it isn’t the most water-resistant watch out there as it can only withstand 100 feet (30 m) of depth.

John Wick’s watch is great, but you may not have $6000 lying around. Don’t fret as we’ll be going through cheaper alternatives on the market. 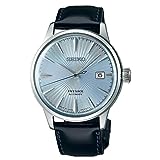 The PRESAGE is an automatic watch as well. It comes with 23 jewels instead of John Wick’s 25.

That being said, it has an almost equal power reserve of 41 hours.

It comes with a strap that looks identical to the Manero. The only difference is that the PRESAGE’s is not made from alligator skin.

The display looks the same as well. They’re both very classic looking with sleek and chic lines that replace Arabic numerals.

Of course, we have to talk about the elephant in the room, which is the PRESAGE’s blueish hue. Other than this, both the watches look alike.

We believe this is the watch that looks the most like John Wick’s. In fact, if you didn’t know any better, you could be fooled by the Orient Bambino.

It has a strap that looks strikingly like Alligator skin. What's even better is that the Bambino has a black strap similar to John Wick’s watch.

The Bambino is water-resistant. Although it’s not impressive at 100 feet (30 m), we’re not complaining since the Manero is only water-resistant up to this depth as well.

Of course, it doesn’t have a sapphire display, instead, it’s mineral.

If you’re wondering, the Orient Bambino is an automatic watch. Unfortunately, it only comes with a 40-hour power reserve but we aren’t complaining since it’s about $5500 dollars cheaper than the Manero Autodate.

Like the Bambino Version I, the Version III looks identical to John Wick’s Manero.

It has a minimalistic dial. Its display is grey, having chic, rectangular markings that replace Arabic numerals.

Although it is an automatic watch like the Manero Autodate, it’s isn’t Swiss Automatic. Instead, it’s Japanese.

Frankly, Version III and I are models that are pretty much the same. The only difference is their price tag.

John Wick is an incredible trilogy, which is well-loved around the world. The watch he wears is equally as good.

If you ever thought what watch does John Wick wear, you now know.

Related Posts
The Ultimate Mens Watch Brand List: 128 Timeless Timepieces
OW Ocean Graph Review: Heritage Diving At Its Finest?
Burei Watch Review: Best Watches by Burei
Martenero Edgemere Reserve: Chic & Functional From New York
Best Benyar Watch: 7 Timepieces You Probably Aren’t Aware Of
Circula Heritage Automatic Review: What to Watch Out For
Vintage Inspired and Definitely Inspiring: The EMG Nemo Diver
NTH Watch Review: Taking Watchmaking to the NTH Degree
Dwiss Watches Review: Hot or Not?
DaLuca Watch Straps Review: Is it Time to Give Credit?
The Ultimate Davosa Watches Review: Are They a High Quality Brand?
Skagen Watch Review – A Scandinavian Wonder?
MVMT Watches Review - Are They The Real MVP?
Ingersoll Watch Review – Quality on a Budget?
August Steiner Review - Fashion on A Budget
Mathey Tissot Review – Should You Work With Them?
Rotary Watch Reviews - Affordable Swiss Beauties
Lucien Piccard Watch Review - Who’s the Former Giant?
Junkers Watch Review - The King of The Sky?
Bertucci Watch Review - The King of The Field
Frederique Constant Watch Review - Classy, Elegant, Good-Looking
Victorinox Watch Review - Who’s Tissot’s Biggest Competitor?
Daniel Wellington Watches Review - Are They Just Pretty?
TicWatch E vs S - Are They Really That Different?
Laco Watch Reviews - Did We Just Find the Best Pilot Watches?
Tissot Reviews - Swiss Luxury at Affordable Prices
MEGIR WATCH REVIEWS - AN UNFAMILIAR FACE FROM THE EAST
A NIXON WATCH REVIEW - BEAUTIFUL, DIVERSE & SOMEWHAT COSTLY
TIMEX WEEKENDER REVIEW AMERICA’S BEST FIELD WATCH?
An Akribos Watch Review – Who’s the Brand Behind the Mask?
Heritor Watch Review: Modern, Classic Timepieces With A Twist
A Jack Mason Watch Review - Who’s The All American Brand?
Glycine Combat Sub Review: A Dive Watch For The Connoisseur?
Author
Thomas Vanderlaan
When Thomas Vanderlaan was a child, the moment he learned about mechanical watches he was hooked. His first love being mechanical watches, he decided to pursue a career in engineering as he was entranced by the science behind its gears. As the years passed, his passion grew. Although he worked a hectic career as an automobile engineer, he’d always collect watches during his spare time.
Affiliate links / Images from Amazon Product Advertising API. Wrist Watch Pro is a participant in the Amazon Services LLC Associates Program, an affiliate advertising program designed to provide a means for website owners to earn advertising fees by advertising and linking to amazon (.com, .co.uk, .ca etc) and any other website that may be affiliated with Amazon Service LLC Associates Program. As an Amazon Associate I earn from qualifying purchases.