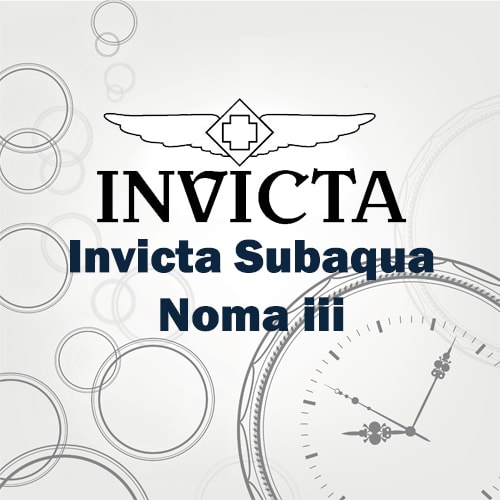 The Noma III (1194) is one of the best dive watches we’ve seen. Not only can it handle superb depths, but it’s very affordable. Invicta really hit it out of the park – we can’t wait to talk more about it in our Invicta Subaqua Noma III review.

In the table below, we ran through its specs.

The watch looks heavy-duty. It comes with a hefty steel body. Its case is on the larger side. It stretches 1.96 inches (50 mm) across. If you have smaller or even average-sized wrists, it’ll look awkward on you. As the device is so big, it’s no surprise that it’s got some weight to it – it comes in at 16 ounces (453.5 grams).

The 1194 is shiny as its stainless steel is high-quality. The Invicta has 3L6L degree steel on it. It is used in the medical industry. It not only results in the watch being shiny but makes it very scratch resistant.

Although its case is big, its dial is small. There’s a chunky bezel surrounding it. The watch also has chunky pushers on its sides – you may slam them into your wrist.

Overall, its design is great. Its silver body is pearl-like, while its dial is pitch-black. You’ll notice it from across the room.

Iits strap has grooves. This not only makes it feel comfortable on your arm but makes it stay on your wrist better. Unfortunately, its bracelet is wide. This might also lead to sweating.

Its case-back is closed. We love timepieces with skeleton rears, so we’re disappointed. However, there are engravings on it, which is a nice touch.

If you’re not a fan of its design, the 1194 is one of many in the Noma III line. They all come with similar specs but look different.

As mentioned, the dial is quite small. It’s bordered by a large bezel. You’ll see rectangular markers in place. They’re full of lume. They’re quite bright, so you can easily read the Noma III when it’s dark outside. The pigment is on its hands as well. However, its hands aren’t that wide, so there’s not much on it.

Most watches have small second hands. This is not true for the Invicta 1194. It comes with a second hand that is as large as its primary hands.

You don’t have to look too close to notice three sub-dials. The pushers on its sides work them. They are the Noma’s chronographs. They measure the milliseconds, seconds and minutes passed. You probably have no idea how chronographs work – they’re stopwatches.

You might not notice the calendar. It’s at an angle that’s hard to read. It’s also quite small and not in the best font. Invicta decided to only place the date, not day.

There is a crown guard. It keeps water from seeping in. However, it’s huge, so you’ll slam it into your wrist. It’s screwed down, so you get extra protection from liquids.

Something you’ll appreciate about its bezel is that it rotates and ticks as it turns. Why would you want this? Because you’ll have a timer in the pool.

Did we mention the glass on its front? You will have a hard time scratching it – it’s flame fusion crystal. It’s sapphire that’s tougher than usual.

The timepiece has a deployment clasp. The clasp-type is the standard for steel bracelets. It unfolds into many parts, so it’s not the easiest to use. There’s a push-button variant that’s a breeze to use, but the 1194 doesn’t have it. Also known as deployant clasps, the one on watch has a safety mechanism.

The 1194 can handle a lot of water. It’s able to withstand up to 1640 feet (500 meters). You can easily dive with it. The lume on it helps you read the time when submerged. Its quality stainless steel body keeps corrosion at bay. It also keeps water and mud off it as it’s very waterproof.

As mentioned, its bezel rotates. You can time yourself to get out of the pool. You’ll also be able to use the chronograph to time laps.

When deep underwater, you’ll appreciate the safety mechanism on its clasp – it keeps you from losing it when diving.

It has a Swiss quartz mechanism. This means a lot of craftsmanship and effort has gone into its build. Swiss movements are known to last the longest. In general, quartz watches are more accurate than their automatic counterparts. This is as they have fewer parts and use circuits to power themselves, not gears.

There are countless Swiss quartz movements out there. We, unfortunately, don’t know what the specific one on the Noma III 1194 is.

To see how great the 1194 is, we compared it against alternatives.

Unlike the 1194, the 8926OB is a homage piece. The watch is a tribute to the more expensive Rolex Submariner. We think Invicta did a good job with its design. The timepiece can handle considerable depths underwater. But it’s not as water-resistant as its counterpart. It can only handle 660 feet (200 meters).  If you’re thinking of diving with it, think again. It is not ISO 6245 certified.

The watch is small. Its case is only 1.57 inches (40 mm). It’ll fit snuggly if you have regular sized wrists. It’ll look awkward if your wrists are on the larger side. The 8926OB doesn’t come with a strong window. It’s a regular mineral.

It’s made completely from stainless steel. The metal is high-quality, which is why it’s so shiny. It’s high-quality, so it can withstand scratches and corrosion too.

Unlike its Noma counterpart, it is not quartz. It is a Japanese automatic. It comes with a skeleton rear – you know how much of a fan we are.

If you take a look at its dial, you’ll notice circular markers. They’re full of lume. The luminous pigment is on its hands too. Unfortunately, we don’t know the name of the specific pigment used.

You’ll appreciate that there is a calendar feature. The one on the 8926OB only reads the date. However, it’s in an easy-to-read angle and is magnified.

As it is paying homage to the Submariner, it’s no surprise that there are shark-like teeth on its bezel. It rotates. The “teeth” on it help you grip it.

The Noma III can handle quite the dip. It’s water-resistant up to 1640 feet (500 meters). It has a large body. Its case stretches 1.96 inches (50 mm) across. It’s not fully made from stainless steel. Its strap is rubber. The material is more waterproof than steel, so you’re in good hands.

There are rhomboid markers on its front with luminous pigment. The pigment is on its hands too. You’ll see a massive seconds’ hand, just like in its brother.

Unfortunately, the Noma 1550 doesn’t come with a chronograph feature. Its crown does have a protector, though. But it’s huge and in the 3 o'clock position.

Compared to the 1194, we think the 1550 has a better appearance – its gold and sea-blue colour just scream luxury. Considering that the timepiece isn’t that expensive, this is what you want. The gold on it is real, ion-plated 18K gold.

The device is swiss quartz. You already know how we feel about it. If you flip its back around, you won’t see an exposed rear.

We’re happy that its calendar is in an easy-to-read angle. However, it isn’t the largest, and it doesn’t have the boldest font.

Just like its brother, it comes in a sapphire window.

It has a durable window. It’s sapphire, just like in the 1194. There are chronographs on it too. They read the milliseconds, seconds and minutes passed. The three pushers on its sides work them. Next to the pushers are its crown – it’s protected, not letting any water in.

You’ll notice dainty markers on its dial. They’re full of luminous pigment. It is on its hands too. Just like the Noma III, its seconds’ hand is huge.

There is a calendar in the 4 o'clock position. This means you’ll be straining your neck trying to read it. It’s bolded well at least.

The 0932 is made out of stainless steel. It's high-quality and is rose gold plated and has a gun-metal body that is attractive. Yes, the gold is 18 K.

It comes with a rubber strap. It’s one of the reasons the watch is lighter than its Noma III brother. As you know, the material is very waterproof.

Its movement is quartz. However, it’s not Swiss – it’s Japanese.

We’re total fans of the timepiece. It’s very affordable but it comes with a plethora of great features. Invicta is not as popular as other brands, but it did well with the timepiece. It’s an excellent dive watch for any watch enthusiast. It can even handle more water than the Rolex Submariner, which costs an arm and a leg.