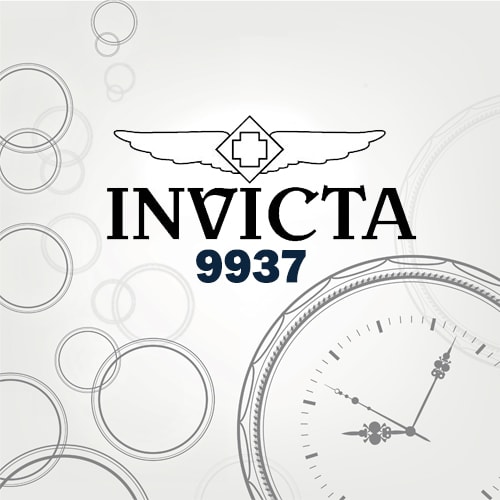 Invicta’s duped all kinds of watches. The 9937 looks like the Rolex Submariner, which is the ultimate dive watch. Let’s talk more about it in our Invicta 9937 review.

The timepiece’s specs are run through in the following table:

As you know, the 9937 looks like the Submariner. They both come with stainless-steel bodies and black and white dials. The Invicta pro diver 9937 pretty much nailed the Submariner’s watch hands.

As it looks like the Rolex device, it’s safe to say that it looks expensive.

As it’s an automatic device, the exposed back is a nice touch. You can watch its many gears move. It not only is mesmerizing but makes the watch look more expensive.

Its crown is on the larger side, so it’s easier to use. However, it might poke at your hand.

The timepiece comes with a flame fusion crystal. It sounds fancy, but it’s just a sapphire window. If you’re new to watches, you probably don’t know that Sapphire is the strongest crystal around.

Its case is stainless steel. The material is all over its body. It’s high-quality, so you won’t scratch it up.

Its dial is pitch-black. There are hour markers full of luminous paint. The lume on it is strong. It’s on its hands too. Invicta hasn’t made it clear, but we’re sure their favourite Tritnite is used.

There’s a calendar in the 3 o'clock position. The standard Rolex Submariner doesn’t come with one. The calendar on the timepiece only reads the day’s date.

You might’ve noticed the shark-like edges on its bezel. They don’t have a purpose. They’re just there to pay homage to the Rolex piece.

You’re looking at an Invicta swiss automatic watch. The eta 2824-2 mechanism is inside it. It results in 26 jewels and a 42-hour power reserve. They’re both above the standard amount.

Jewels are placed in-between gears to lessen friction. The more of them there are, the smoother your watch will be. Around 21 is the standard.

Power reserves are how long you can have your automatic watch off your wrist. It powers itself with the kinetic energy from your arm, so its power reserve is how long it can keep its gears moving with the energy it has collected. 38-40 hours is the norm.

What’s great about the watch is the availability of self-winding and hacking. Hacking is when you halt the seconds’ hand, readjusting the time. Self-winding is pretty self-explanatory.

If you want a timepiece huge on craftsmanship, the 9937 is the one for you. A lot of effort goes into Swiss mechanisms. A lot of their parts are hand-made.

The Invicta 9937 can handle quite a dip underwater. It’s resistant up to 660 feet (200 meters).  You can easily snorkel with it. The brand promises that it can dive too. Just for comparison’s sake, the Rolex Submariner is resistant up to 1000 feet (300 meters).

The device comes with a rotating bezel. It ticks as it turns, letting you time yourself in the pool.

As you know, there is ample lume on its display. When you’re deep underwater, such luminosity will make the watch easy to read.

As it comes in a quality stainless steel body, corrosion and rust will never be an issue. It’s also quite waterproof.

The device looks and feels expensive. Let’s see how well it does against its alternatives.

The 8926OB Pro looks similar. This is mainly as the watch is a homage to the Submariner. It comes with a silver and black body. And its dial is a sharp black with hour markers full of lume. Its watch hands have a luminous pigment that looks like the Submariner.

If you’re wondering what its window is made of, it’s mineral. Considering that the 8926OB isn’t as expensive as its counterpart, the glass was expected.

You can easily spot the calendar on its dial. It’s large and in charge, in the 3 o'clock position. If there are any complaints, it’s that it only reads the day’s date.

There are shark-like teeth on its bezel. As you know, there isn’t a purpose for them. They’re mainly there to tribute the Rolex Submariner. The device also has a large crown, like the Submariner.

It can handle quite the dip underwater. It’s resistant up to 660 feet (200 meters). It’s not ISO 6425 certified, so you can’t dive with it on. As its dial is full of lume, reading it underwater won’t be an issue. And its quality steel body keeps corrosion at bay.

What kind of mechanism does it have? The device uses the NH35A Seiko movement. Yes, it was created by Invicta’s rival. It comes with 24 jewels and a 41-hour power reserve. We have to say, the availability of 24 jewels are really good.

There is an exposed back and we’re fans of it!

The Invicta 5053 comes in a red and blue colourway that’s nothing like the 9937’s. We think the colours are refreshing. The watch’s dial is a sharp blue with hour markers full of lume. Its watch hands are full of luminous pigment too. Invicta has released the name of its pigment – it’s Tritnite!

Its body is stainless steel. It’s quality steel, just like its brother’s. This helps you use it underwater. Speaking of underwater, it can only handle 660 feet (200 meters). The 5053 is capable of diving.

The watch is the same size as its counterpart. But it weighs way more. This helps it feel premium as it’s not as expensive as the 9937.

We don’t have to point out its calendar for you to notice it. It’s huge; however, it only reads the day’s date.

There aren’t any shark-like teeth on its bezel. We would have preferred it if they were in place.

What about the glass on its display? It’s unfortunately not sapphire. There is a much weaker mineral instead.

Yes, it’s an automatic device. The NH35A movement from the entry above is available.

The 8926 looks like the 9937. This is as the timepiece is also a Rolex Submariner homage. It looks expensive, which is great as it’s not that pricey. It isn’t that big either. Its case is 1.57 inches (40 mm). It weighs similarly to its sibling too.

Its display is full of lume. As you can imagine, its hour markers and watch hands are packed with pigment. The timepiece can easily be read in dim settings. It can also easily be read underwater. It can handle 660 feet (200 meters).

You’re looking at another automatic watch. The NH35A mechanism is inside it. If you remember, it has 24 jewels and a 41-hour power reserve. The 8926 comes with an exposed back, so you can watch its gears move which is a nice touch.

There’s a large calendar on its dial. It looks like Invicta is a fan of the feature. It’s in the 3 o'clock position, so you won’t be straining your neck trying to read it. It only reads the day’s date, which is fine at this point.

The Invicta 9937 is a dive watch that looks expensive. It’s not the cheapest, but the brand did well with the Submariner duping. The timepiece copied its key elements. Not only is it a great tribute piece, but it works well too. We’re especially pleased with its automatic movement – it won’t let you down!