The EMG Nemo diver has already become a favorite amongst some collectors. Here we’ll take a look at why.

EMG is a new micro brand. And that’s sometimes a sentence I’m weary of. There seems to be a new watch brand every month, and with the rise of crowdfunding it is getting easier to get your pet project off the ground. But EMG is the real deal. Formed by two long-time enthusiasts and WatchUSeek members.

Their first watch was the DL63 ‘Panda’ Chronograph (of which there is now a 2021 update). A timepiece that quickly proved their watchmaking credentials. The Horizon followed, a square watch with a distinctly retro feel. And next came the Nemo.

So, let’s look at this diver made with the latest materials in our—A vintage inspired and definitely inspiring: The EMG Nemo Diver, review:

The EMG Nemo Diver is an excellent take on the vintage diver. It doesn’t attempt to break the mould, but what it does, it does very well.

It has all the specs to be a fully working diver with 200m water resistance, a unidirectional bevel, and good lume. Its modest dimensions fit the vintage inspiration, and it sits very well on the wrist. Combined with a beads of rice stainless steel bracelet, the watch has a distinct look that is both modern and retro.

EMG has chosen their materials with care. They use a Miyota automatic movement known as a quality and reliable mechanism. The material choices make the watch feel solid and dependable. Exactly the right feel for a diver.

The Nemo Diver is EMG’s take on a vintage diver. It’s not going to win awards for radical aesthetics. But it’s a well executed example of the style. The overall look is kind of retro-futuristic (I know that’s not really a thing, but it’s a good description). It has the 20,000 Leagues Under the Sea vibe that the Nemo name refers to.

EMG have gone for tried and tested choices that give a premium feel. Sapphire crystal, a ceramic bezel, stainless steel and the excellent Miyota 90S5 automatic movement.

Its dimensions are fitting for a vintage inspired diver. At 40mm it will fit on most wrists. Helping that fit are the swept back lugs that help the watch nestle into the wrist. The Nemo is 13.5mm thick, and the domed sapphire crystal and bulging caseback seem to make it feel thicker. I don’t think this will be a problem for most, but it’s something to be aware of.

An interesting point to note, is that while they have chosen a movement with an open heart window, EMG have decided not to add an open heart to the dial. I agree that it would not have looked right in a vintage inspired diver. So, I’m personally happy they didn’t fall for the temptation.

Overall, the EMG Nemo diver case is more than the sum of its parts. When you break it down, the Nemo case shouldn’t be anything special. But somehow it still is.

The finish is about what you’d expect from the midrange, possibly slightly better than most. The polish is good but not exceptional. There isn’t a lot of fancy detailing, no large bevel on the edge or different angles to attract attention. And the subtlety is in keeping with the style.

This soft shape has the added advantage of being extra comfortable on the wrist. Combined with the swept back lugs, this is a watch you can wear all day.

The caseback does protrude from the case itself by a noticeable amount. But it doesn’t seem to affect comfort. There is a laser engraved squid on the caseback that is a clever nod to the Nemo name.

The EMG Nemo Diver was released with six colors, green, black, white, denim blue, yellow, and a pale blue. It’s a good range of colors and means there should be something for everyone.

In keeping with the vintage inspiration, EMG has gone for minimalist detail on the face. The logo below the 12 position reminds me of the symbol on the Star Trek uniforms. I think this is something to do with the collaboration with HKED (Edy Tse, who I believe is now a full member of the EMG team). The only text is a red NEMO and a small 20ATM above the six position. It keeps the face uncluttered and clean.

The faceted hands reflect light well and seem to take on a range of colors depending on your surroundings. It adds a premium feel to the timepiece because that’s the kind of thing you only tend to find on more expensive pieces.

EMG has not been stingy with the lume. Something I really like in a diver. The Superluminova C3 X1 Lume, to give it its full title, is big and generous on the implied indices and the hands. They’ve even remembered to give the second hand a red outlined paddle with its own touch of lume.

An interesting touch, which I think works amazingly well on the Nemo, is the red minutes track EMG has added around the dial. It’s another splash of color that looks great with all the color options, but probably best on the black and white ones (but that’s just a personal preference).

Personally, I think the white dial works best for this watch. And that surprises me, because I’m usually partial to a bright colored face. It might be the contrast with the bezel that does it. Although all the color options work surprisingly well.

Speaking of the bezel, it’s a matte black ceramic 120 unidirectional affair. EMG has made it almost flush with the case to help keep that diameter down. Obviously, with it being a diver, they have markers on the bezel, but unlike some, this one has the full sixty-minute markers and—they get massive bonus points from me—they have lumed all of them.

The matte black is another choice that I imagine comes from the vintage inspiration. It suits the watch style and is sleek without being flashy. The 120 clicks are solid and there isn’t much play.

The only thing I would say on the bezel is that I don’t think it’s grippy enough for a diver. But I know that’s probably more to do with the vintage design ethos and a deliberate choice. And I also know most people will probably agree with the decision.

The Miyota 90S5 Automatic is a well tried and tested movement. It is the Miyota 9015 without a date complication. That means you have over 40 hours of power reserve, 24 jewels, 28,800 vibrations per hour and an accuracy that is officially -10+30 seconds a day. Although I have found the 9015 to be a lot more accurate than that.

Most people I know, and most reviews I’ve seen, think the dateless movement option was a great choice. It gives the dial a simple symmetry that is appealing. Personally, I don’t agree. I like a date, it’s a function I use a lot on a watch and I think they usually add rather than detract from a watch dial. Also, a lot of the vintage divers had date windows, so it would have been a reasonable argument from a design point of view. But, I’m in the minority and if that’s all I have to be negative about, it’s obviously a pretty great watch.

I have to be honest, the beads of rice style bracelet is not my thing. But on this watch it works perfectly. This is a rare thing for me to say, but I don’t think I would change it. I could if I wanted to because EMG has drilled the lugs. So, swapping out bracelets is quick and painless.

The bracelet tapers from 20mm at the lugs to 18mm at the clasp. Which is a push-button flip lock with six micro adjustments.

The quality of the beads of rice bracelet is extremely good, with a finish that is probably a touch better than the case itself, but you would probably need a microscope to tell. A nice detail is the laser engraved squid and logo on the clasp.

I must admit, the first thing I thought when I heard about EMG making a vintage diver was: oh great, another one. But having spent some time reviewing it, I’ve changed my mind. I totally see why enthusiasts love this watch. It is a perfect example of a vintage diver. It has everything you want and almost nothing you don’t.

The only issue now is getting hold of one. EMG has completely sold out, and collectors are reluctant to part with what is rapidly becoming a favorite everywhere. If you do find one, you’d do well to snap it up. I can’t see these going down in value. For now, I can only hope they decide to run another batch. 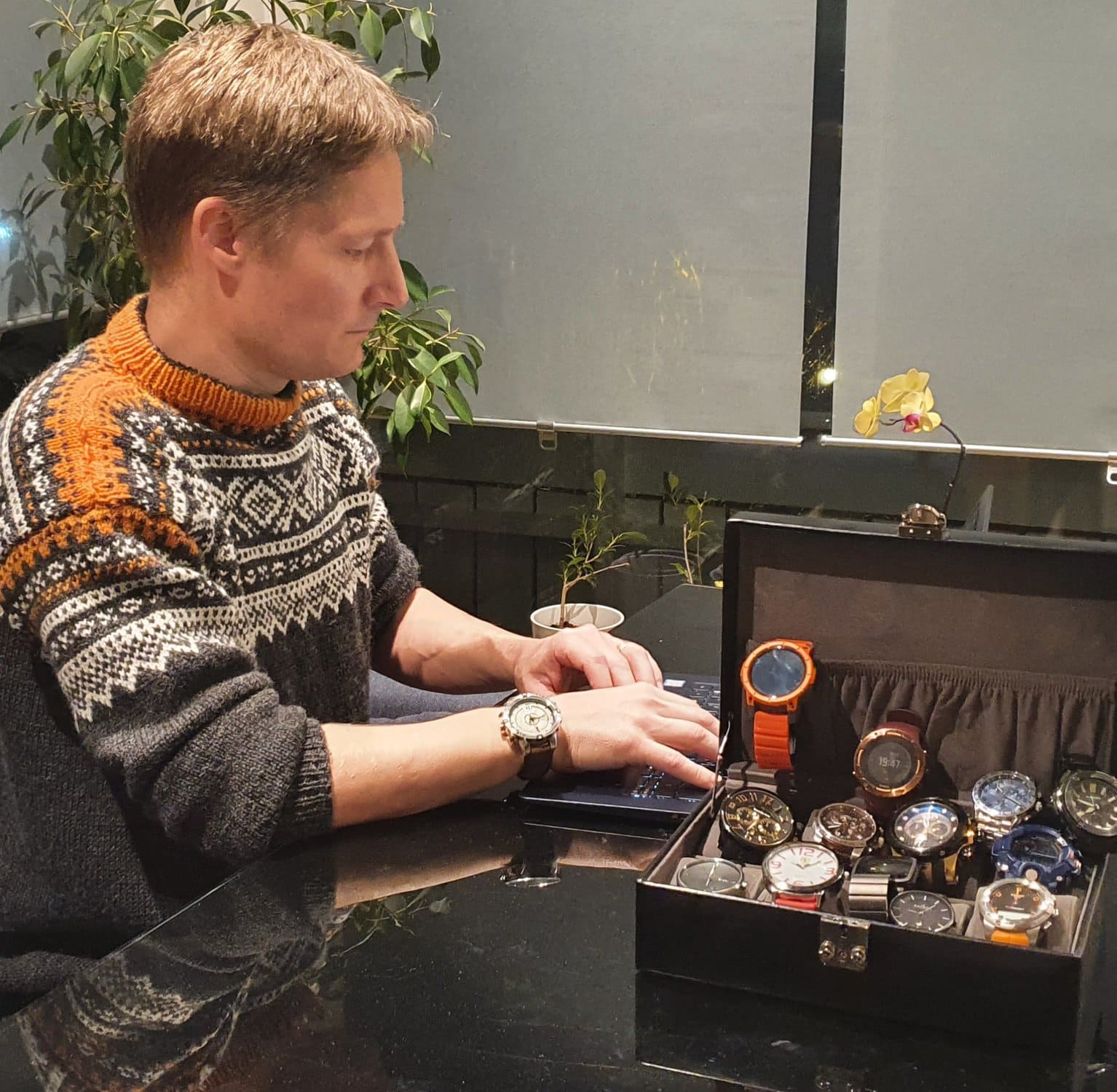 Alastair Crombie
I’ve been collecting watches since I bought a ‘Rowex’ for a fiver from a mate when I was 10. He told me you pronounced it Rolex and that’s how it all started. I used to love that Rowex. These days I still tend to stick to the more affordable end of the market. Both my wallet and my wife are happier that way. My favorite watch changes with the seasons, and that’s what I love about watches. Each one doesn’t just tell the time, much more importantly, they tell a story.
Affiliate links / Images from Amazon Product Advertising API. Wrist Watch Pro is a participant in the Amazon Services LLC Associates Program, an affiliate advertising program designed to provide a means for website owners to earn advertising fees by advertising and linking to amazon (.com, .co.uk, .ca etc) and any other website that may be affiliated with Amazon Service LLC Associates Program. As an Amazon Associate I earn from qualifying purchases.