Do Bulova Watches Have Real Diamonds? What Did We Uncover?

Do Bulova watches have real diamonds? This is a question even watch enthusiasts ask. The brand doesn’t produce the most expensive pieces, which is why it might confuse you when people say it has diamonds. We took a good look at this below.

It’s one of the oldest names in the US, having been founded in 1875 by Joseph Bulova, an immigrant from Bohemia.

The manufacturer is now owned by the Citizen group. Its timepieces are well respected in the industry. They look good and provide luxury features for an affordable budget.

If you’ve heard of Bulova before, you probably know how accurate its pieces are. The units in the Accutron line have some of the most accurate timekeeping mechanisms around.

How accurate are they, though? Up to 2 seconds a day.

Working with NASA propelled the brand to stardom. David Scott wore the Bulova Moon Pilot Chronograph on his mission to the moon. The device was auctioned for over USD 1.5 million later. The company placed Accutron technology into several of NASA’s computers as well.

Considering the heritage behind the giant, it shouldn’t surprise you that Diamonds might be placed in its watches. Let’s talk about this.

Does Bulova Use Diamonds?

Believe it or not, the company uses diamonds. If the timepiece is from a “Diamond” collection, it’ll have the gems in place. Unfortunately, information on where the diamonds are sourced is not available.

Bulova hasn’t made it public knowledge if they cut the jewels themselves either.

How Much Do Bulova Watches Cost?

The brand doesn’t produce expensive watches. However, some units are pricier than others. Take a look at the Accutron Percheron. It was the first watch in the world to be made from solid 24K gold.

It’s made from gold plated stainless steel. The steel on it is surgical grade so corrosion will never be an issue. The metal is high quality so muck and dirt won’t stick either.

It has 8 diamonds between its hour markers. The face is 1.52 inches (40 mm), which is the perfect size in our opinion. Its bracelet is not heavy – wearing it for a while would be easy.

You’ll appreciate how accurate its movement is. It rocks the Accutron mechanism. Its quartz movement beats at 262 Khz.

If you flip it over, you’ll see Bulova’s logo on its clasp. This makes it look more premium. 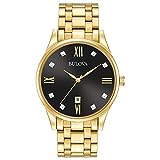 Where Are Bulova Watches Made?

Considering the inclusion of premium materials yet affordable price, you may be wondering where the brand’s pieces are made. Although Bulova is an American company, it has watches made all over the world.

Its higher-end products are made and designed in Switzerland. The more affordable ones are made in Hong Kong, while the middle-range units are manufactured in Japan.

How Do You Spot Fake Bulova Watches?

An easy way to tell the difference between fakes and real ones is that the original Bulova would always be heavier.

But this isn’t a very accurate technique. Let’s talk about the other ways.

The device should have the ‘Bulova’ name on its dial or metal exterior. It might have the model name along with it, reading “Bulova Accutron” or “Bulova Caravelle”. A lot of dupes read “Bulova movement” instead.

The company wants to make it easier for you to spot fakes. That’s why it has started to include serial numbers on the back of units.

You can run the code through its site to find out if it’s a real piece or not. You can contact customer support and get them to check as well.

The code would only be on newer Bulova pieces. If you picked an older one up, customer support might be able to direct you to a jeweler that could help. They’d be able to examine your watch.

Something distinct about the brand’s products is the Art Nouveau-style elements. You’ll see swirls inspired by the style on its devices.

Let’s sum things up. Yes, Bulova places real diamonds on its watches. The manufacturer has quite the reputation and has been acclaimed as one of its watches made the trip to the moon.

Related Posts
Bulova Accutron II Review - Who’s the Snorkel 96B208?
Bulova Precisionist Review – Meet Superb Accuracy!
Bulova Accutron Gemini Review - Craftsmanship on A Budget
Bulova CURV Review - A World’s First
Bulova Lunar Pilot Review - A Watch Fit for The Stars?
Bulova Marine Star Review - Are They Stars?
Bulova Watch Reviews: High-end Watches You Need In Your Life
Bulova Sea King Review - Do They Rule the Sea?
Author
Thomas Vanderlaan
When Thomas Vanderlaan was a child, the moment he learned about mechanical watches he was hooked. His first love being mechanical watches, he decided to pursue a career in engineering as he was entranced by the science behind its gears. As the years passed, his passion grew. Although he worked a hectic career as an automobile engineer, he’d always collect watches during his spare time.
Affiliate links / Images from Amazon Product Advertising API. Wrist Watch Pro is a participant in the Amazon Services LLC Associates Program, an affiliate advertising program designed to provide a means for website owners to earn advertising fees by advertising and linking to amazon (.com, .co.uk, .ca etc) and any other website that may be affiliated with Amazon Service LLC Associates Program. As an Amazon Associate I earn from qualifying purchases.