Bulova Sea King Review - Do They Rule the Sea?

To review the collection, we decided to look at the Bulova 96B228. We summarized its specs in the following table. 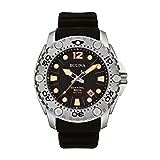 It is huge – its case stretches 1.89 inches (48 mm) across. The thing with large watches is, you can still wear them if you have smaller wrists. But they won’t look good on you.

Its orange, grey, and black colourway is not the most appealing. However, the bright orange against the two is very eye-catching. This was done for a reason, as you’ll see later.

You’ll notice shark-like teeth on its bezel. They aren’t there for decoration – they help you grip and turn it better. The Rolex Submariner is acclaimed for such a bezel. Timepieces like the 96B228 took inspiration from it.

The glass on its window is strong. You’re getting sapphire. If you didn’t know, it is the toughest glass around. Just so you know, Stuhrling says their Krysterna gives it a run for its money.

You don’t get Arabic numerals on its dial. We love watches with them, as they’re the easiest to read. In the Sea King, you get large circular markers with only the 12 numeral. If you look at its markers, you’ll see an odd hue. This is as they’re full of luminous pigment. Bulova is known to use some of the brightest lume around.

There is a calendar on it. If you’ve read our reviews before, you’d know that we’re not fans of calendars in the 4 o'clock position. Your neck would be sore reading them. The calendar on it is bolded well at least. That being said, it only reads the date. The Sea King would be more functional if it read the day too.

If you look at its crown, you’ll notice that it’s large. What’s great about it is its guard. It prevents it from getting snagged onto your scuba-gear. As its crown is so big, it’s easy to rotate.

As you know, its strap is rubber. Not only will water be repelled, but so will mud, muck, and other things. Wearing rubber on your wrist is not fun. It’ll collect sweat. Unfortunately, the timepiece’s band is huge.

The device has a tang buckle clasp. You’ll be hooking pins into holes, securing the watch into place. The thing is, tang buckles aren’t the most secure for diving. That’s why we’d swap it for a deployant clasp.

You’ll be able to deep dive with it as it can handle 1000 feet (300 meters) underwater. Bulova’s known for their exceptional dive watches and the Sea King does not disappoint.

Since it’s so luminous, you can easily read the time underwater. A lot of diving pieces have orange faces as the colour is known to be the best to read underwater. People especially look for orange dive watches.

Its bezel rotates. Why is this useful? Because it acts as a timer, indicating when you need to get out of the water. As it is edged, you can easily turn it.

The device is screwed down well. It also rocks a sapphire window, which is more than capable of handling the pressures of diving.

The 96B228 is Japanese quartz. It is one of the most accurate timepieces around and rocks the Precisionist movement. It comes with a 262 kHz mechanism. It’s up to 10x more accurate than other quartz watches.  In general, quartz is more accurate than automatic movements, as they have fewer parts.

As it’s a quartz, it’s not shocking to not see a skeleton dial or back. The mechanism doesn’t use any gears, so there’d be nothing to gawk at.

Now that you know everything about it, let’s see how well it fares against competitors.

The timepiece looks a lot like the 96B228. They both have identical cases. Their dials are similar too – the only difference is that it doesn’t come with orange markers. You get a deep yellow tint from lume, but that’s it. In terms of its hands, there are orange accents, though. Overall, the device is easy to read as its face is big. The high-quality lume on it helps it easily be read in dim settings.

How deep of depths can it handle? You can dive up to 3280 feet (1000 meters). As mentioned, the brand’s known for pieces that can handle serious depths – just look at our Bulova Marine Star review.

Its strap is rubber, so it’s waterproof. The stainless steel on its face is strong and waterproof as well.

Its case hosts a large crown with a guard. Moreover, you see pushers on its left side that are separate from this. You’re probably wondering what they are as they don’t look like they work a chronograph. They are its helium valve. When you’re deep underwater, the feature releases any gas that has built up.

In terms of the crystal on it, it is sapphire.

It is big.  It’s 2 mm larger than its counterpart – make note if you have smaller wrists. 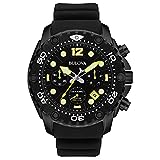 The timepiece is a vision in black. We think it looks chic. The black on its stainless steel is hard to chip as Bulova is known for the quality of their devices. Although its body is stainless steel, you’re getting a rubber strap. It’s identical to the one on the 96B228.

You’ll notice two pushers on its sides. Unlike its counterpart, it comes with chronographs. They read the milliseconds, seconds and minutes passed. They are the three sub-dials on its display. Its pushers feel good against your fingers. Some timepieces have chronograph buttons that are stiff to the touch.

Something you’ll notice about its dial is the neon-yellow accents throughout. As you know, bright colours are easy to read underwater. The fact that it is fully black makes the yellow pop.

There are circular markers throughout its dial. They are full of lume and this makes the 98B243 even easier to read when diving.

The cherry on top is the presence of a calendar. That being said, it’s in the 4 o'clock position, which isn’t the easiest to read. It also only tells you the date.

You’re probably wondering how water-resistant it is. Well, it can handle 1000 feet (300 meters) underwater. It’s great for deep diving. The glass on its window is sapphire and can handle such depths.

It is a big watch. Like its brother, it stretches 1.89 inches (48 mm) across. There is also a crown guard on it and we mentioned how useful it is.

We’re happy to say that its bezel rotates.

In terms of its movement, it hosts the Precisionist mechanism. It beats at 262 Khz as well.

What do you think about Bulova’s Sea King? They’re serious dive-ready pieces. They don’t look the best, but that’s because they were built to withstand great depths underwater.

The manufacturer is known for the quality of their watches, which is clear in this line. Overall, we’re fans!

Related Posts
Do Bulova Watches Have Real Diamonds? What Did We Uncover?
Bulova Accutron II Review - Who’s the Snorkel 96B208?
Bulova Precisionist Review – Meet Superb Accuracy!
Bulova Accutron Gemini Review - Craftsmanship on A Budget
Bulova CURV Review - A World’s First
Bulova Lunar Pilot Review - A Watch Fit for The Stars?
Bulova Marine Star Review - Are They Stars?
Bulova Watch Reviews: High-end Watches You Need In Your Life
Author
Thomas Vanderlaan
When Thomas Vanderlaan was a child, the moment he learned about mechanical watches he was hooked. His first love being mechanical watches, he decided to pursue a career in engineering as he was entranced by the science behind its gears. As the years passed, his passion grew. Although he worked a hectic career as an automobile engineer, he’d always collect watches during his spare time.
Affiliate links / Images from Amazon Product Advertising API. Wrist Watch Pro is a participant in the Amazon Services LLC Associates Program, an affiliate advertising program designed to provide a means for website owners to earn advertising fees by advertising and linking to amazon (.com, .co.uk, .ca etc) and any other website that may be affiliated with Amazon Service LLC Associates Program. As an Amazon Associate I earn from qualifying purchases.