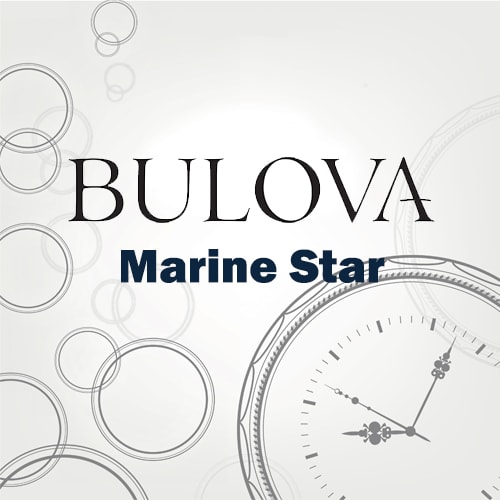 The Marine Star is one of the brand’s most acclaimed collections. It produces a diverse range of watches that can handle considerable depths. As they’re so many, our bulova marine star review takes a look at one them, comparing it to some notable entries from the collection.

We will be taking a look at the Bulova 98H37. We thought of running through its specs in the following table:

Bulova’s Marine stars come in various designs. A similarity amongst its men’s pieces is diving bezels. This means they rotate, letting you time yourself underwater. They also have chronographs.

Its women’s pieces are much daintier. They are usually embellished. Of course, they can handle considerable depths.

We noticed that some Marine Stars look like Daytonas – the Rolex timepieces that cost an arm and a leg.

As mentioned, we’re reviewing one device from the line – the 98H37. It has a deep blue dial. We think Bulova did a good job with the shade as it looks luxurious. It’s also on its bezel. There are ‘edges’ to it. They are present to help you turn it better.

The 98H37 is a Daytona homage. It comes with chronographs positioned exactly like in the Swiss timepiece. It also has gold accents – even a gold stripe running through its bracelet like its counterpart. However, its stripe is much thinner.

It is not very big. Its case stretches 1.65 inches (42 mm) across. But if you have smaller hands, it might be too big.  We’re fans of timepieces with heft – they feel more premium. The watch isn’t light, but it doesn’t feel as premium as the Rolex Daytona – it is almost 6 ounces (170 grams).

Did we mention that it’s made from quality stainless steel? You won’t have to worry about scratches.

There are rhomboid markers to tell the time. They’re white with gold accents, so they pop against the dark blue backdrop. You’ll be glad to know that the markers are full of lume. The device’s hands are luminous too.

Its chronograph is the three sub-dials in the 6 o'clock position. If you don’t know what the feature is, it’s a stopwatch. It reads the seconds, minutes and hours passed. The pushers on the 98H37’s sides operate it.

You might have to look closely to notice the calendar on it. It’s in the 4 o'clock position and only reads the date. It’s quite small, and we didn’t catch it until we gave the device a good look.

There is an outer ring around its face. It reads ‘tachymeter’. They work with chronographs to tell you the speed and distance between 2 objects. The two are widely seen in aviation pieces. They can be useful when timing laps as well.

What about the glass on its window? It’s a regular mineral. It can handle a beating, but it’s not the toughest type available.

It doesn’t have a thick strap. We’re not huge fans of thick metal straps as they make timepieces uncomfortable to wear – and you’ll sweat a lot. When you look at the Marine Star line, you’ll see a mixture of all kinds of bands. The leather used in its pieces is genuine and feels amazing.

Attached to the 98H37’s bracelet is a deployant clasp. This isn’t extraordinary as the clasp is widely seen in stainless-steel devices. That being said, the one on the timepiece is the push-button variant. Yes, it works with the literal push of a button. Many clasps that are its type have extra safety mechanisms – this isn’t true for the one on it.

It can handle considerable depths. It’s resistant up to 330 feet (100 meters). If you’re someone who snorkels, you can take it underwater. Depending on the Marine Star you choose, you could get more resistance.

As it’s made from quality stainless steel, waterproofing is not an issue. So, not only does it not let water get in, but it doesn’t let mud or muck stick either.

It has a heavily enclosed body. This prevents water from going inside. It also lets it handle a beating.

As mentioned, its bezel rotates. Each time it turns, it ticks. We don’t know how many ticks its bezel allows for, but 120 is the gold-standard. We do think they are loud, though.

Its dial is luminous. This helps you read the time underwater. That being said, the lume on it isn’t the brightest.

You’re looking at a Japanese quartz device. The Marine Star collection contains automatic ones too. We have some bad news for you – we don’t know the specific quartz mechanism inside it. There are countless out there.

The movement on it is accurate. Bulova is home to the precisionist line, which produces some of the most accurate watches in the world – you can read more about them in our Bulova watch reviews.

As the device isn’t automatic, it isn’t surprising that it’s not very heavy. Automatic timepieces have many gears in them. They also come with exposed backs to let you peek inside.

Since we reviewed one Marine star, comparing it with its siblings will give you a better look at the collection.

The Marine Star is larger than its counterpart. Its case comes is 1.73 inches (44 mm). If you have smaller wrists, it’ll eat you up. Although bigger, it’s lighter than its brother. It weighs in at 4.3 ounces (121.9 grams). It’s made from quality stainless steel – good luck trying to scratch it.

Everything is stainless steel except for its strap. It is silicone. If you didn’t know, the material is more waterproof than steel. It is also softer – it’s great for watches that can handle considerable depths. The 98A227 can withstand 660 feet (200 meters). It is very water-resistant, but you can’t dive with it.

It has a rotating bezel. It ticks as it turns. The timepiece has a sub-dial. It is not a chronograph, it reads the seconds passed.

You’re not looking at a Japanese quartz watch. It’s an automatic device. We don’t know the specific automatic movement inside it. However, it has 21 jewels. They are pieces of glass placed between gears. The more present, the smoother a watch will run.

We love watches with exposed backs.  You’ll be mesmerized by their insides at work. Not only does the 98A227 come with a skeleton rear, but there’s a cut-out on its front too.

The crystal on its window is sapphire. You won’t easily be able to scratch it, it’s the hardest crystal around. No, it isn’t real sapphire. Synthetic versions are placed on timepieces.

You might have noticed rose gold around its case. It was plated on. 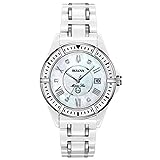 Although its case is stainless steel, it has a ceramic strap. The material is very scratch-resistant and helps with its ice-like look. As the 98P172 is a woman’s watch, it’s not surprising that it’s on the smaller side – its case stretches 1.45 inches (37 mm) across.

There are individual crystals as its hour markers. Bulova says that they’re diamonds. We don’t know how true this claim is, but they look exquisite. As you can imagine, they don’t have any lume. There isn’t any pigment on its hands either.

It can handle 330 feet (100 meters) underwater. Ceramic is very waterproof, so you don’t have to worry about anything sticking to it. The watchmaker says that snorkeling is the most you can do with it.

You’ll have a hard time trying to dent its crystal up. It is sapphire – you already know how we feel about it.

We’re happy to see a calendar in the 3 o'clock position – this means you won’t be turning your head at awkward angles to read it. It only reads the date, though. We would’ve preferred if it read the day too, but the feature would’ve been too big, eating the small display up.

This is not an automatic device – the 98P172 is Japanese quartz. Like the 98H37, we have no idea what movement it uses. Yes, it offers accurate timekeeping.

The Marine Star line is full of great water-resistant pieces. We would’ve loved it if they could handle diving, but they’re built for the water and come with eye-catching designs. What’s great about them is that they’re high-quality too. You should certainly consider them.

Related Posts
Do Bulova Watches Have Real Diamonds? What Did We Uncover?
Bulova Accutron II Review - Who’s the Snorkel 96B208?
Bulova Precisionist Review – Meet Superb Accuracy!
Bulova Accutron Gemini Review - Craftsmanship on A Budget
Bulova CURV Review - A World’s First
Bulova Lunar Pilot Review - A Watch Fit for The Stars?
Bulova Watch Reviews: High-end Watches You Need In Your Life
Bulova Sea King Review - Do They Rule the Sea?
Author
Thomas Vanderlaan
When Thomas Vanderlaan was a child, the moment he learned about mechanical watches he was hooked. His first love being mechanical watches, he decided to pursue a career in engineering as he was entranced by the science behind its gears. As the years passed, his passion grew. Although he worked a hectic career as an automobile engineer, he’d always collect watches during his spare time.
Affiliate links / Images from Amazon Product Advertising API. Wrist Watch Pro is a participant in the Amazon Services LLC Associates Program, an affiliate advertising program designed to provide a means for website owners to earn advertising fees by advertising and linking to amazon (.com, .co.uk, .ca etc) and any other website that may be affiliated with Amazon Service LLC Associates Program. As an Amazon Associate I earn from qualifying purchases.