Bulova Lunar Pilot Review - A Watch Fit for The Stars? 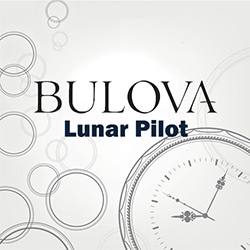 Bulova is a brand that’s been around for a while. In the 1970s, one of their timepieces was worn to the moon by Astronaut David Scott. His device was sold at an auction for a whopping $1,300,000. Stories about the timepiece unraveled, and it caught a lot of attention. Bulova decided to do a reissue which did well. In 2017, they released another reiteration of the Moon Watch – let’s talk about it in our Bulova Lunar Pilot review.

Now that you know a little about its history, let’s take a look at its specs. 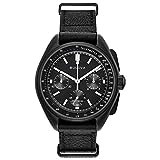 The Lunar pilot is big – its case stretches 1.77 inches (45 mm) across. If you have smaller hands, it’ll look awkward on you. However, its strap isn’t wide, so it fits nicely.  We’re huge fans of the leather on it. It looks high-quality and is super comfortable. We aren’t sure if it’s Italian, but we think so.

It rocks a full black body. You normally won’t see this. Not only does this make it chic, but it’s eye-catching. The black on its case is painted on top of the stainless steel. Bulova produces high-quality watches, which is why we’re glad that the steel on it can handle a beating.

There aren’t any Arabic numerals on it. You’re met with rectangular markers instead. They are a bright-white, so they contrast against the dark dial greatly. Its markers have luminous paint on them. You’ll see the pigment on its hands too.  Now – is it a strong lume? Not really, it’s pretty lightweight.

There is a chronograph feature, which consists of three sub-dials. They read the milliseconds, seconds and minutes passed. Using a chronograph is similar to a stopwatch.

Sapphire crystal protects its dial. If you’re a watch enthusiast, you’ll know that it’s the hardest window you could get. We especially like the display on the Lunar pilot – its sapphire lays flat. This makes it more modern.

Just like the original, the 2017 variant has elongated pushers on its sides. With a glance, you might not realize that they work its chronograph. They have a nice click to them.

We love the look of its seconds’ hand – it’s almost scepter-like. Bulova made its crown look literal too.

You’ll notice that the Bulova luna pilot chronograph hosts a tachymeter. The feature works with chronographs to tell the speed and distance between objects. You can guess how useful this would be for an astronaut.

Sadly, there is no calendar. We think they make timepieces more functional.

It can’t handle much water. It’s only water-resistant up to 165 feet (50 meters). It’s not a diving watch and Bulova doesn’t advertise it to be used in the pool, so we’re not disappointed. As it’s made from high-quality stainless steel, its face is very waterproof.

If you get its strap wet, you’ll, unfortunately, have a problem. It’s leather, so it’s difficult to dry. The material is known to absorb a lot of water as well.

Thanks to the luminous dial, you’ll be able to read it when submerged. But don’t forget that its lume isn’t very bright. Other Bulova watches have great lume, though.

Its leather strap is comfortable. We’re glad that it isn’t very thick – the more leather on your wrist, the more you’ll sweat. Some people get skin irritations, so not having a lot of leather was a good choice.

The band on it is NATO. This makes it a breeze to put on as you just loop its strap into place. They were made for the military, so they are durable and won’t fall off your wrist.

If you’re not a fan of its clasp, know that you can swap it. It’ll take a little bit of work, but you could change it for a push-button one. Yes, it works exactly as its name suggests.

Bulova is home to the Precisionist line. It has some of the most accurate quartz watches in the world. The Lunar pilot hosts the Bulova Calibre 8136. This gives it a 262 kHz frequency. It’s as accurate as the Precisionist counterparts.

Although we know its mechanism is accurate, we don’t know much else about it. We especially don’t know if it has any jewels – jewels in quartz pieces tend to be rare.

Before you get too excited, they are synthetic gems placed between gears. Quartz watches don’t have gears, so having as many jewels as mechanical or automatic counterparts is pointless.

As the 98A186 is a quartz, it’s not a surprise that it doesn’t come with a skeleton rear – you wouldn’t get a good view.

To wrap up our Bulova moon watch review, let’s see how well it stacks up against other reiterations.

Unlike its brother, it was released in 2015. It doesn’t have a leather strap. It’s a vision in silver as its whole body is stainless steel. You’ll notice that the steel on it has a special effect – it makes it more pearl-like.

Its hour markers are rectangular. They are full of lume and so are its hands. However, the luminous pigment on it isn’t the best. Similar to the 98A186, the device is 1.771 inches (45 mm). It might swallow your wrist up. Thankfully, its strap isn’t that wide.

The timepiece comes with 3 chronograph sub-dials. They read the milliseconds, seconds and minutes passed. To work them, you’ll be using the pushers on the sides. They provide the same resistance we loved from its sibling.

Unfortunately, it’s not very water-resistant. It can only handle 165 feet (50 meters) underwater.

When looking at its dial, you’ll be peeking through a sapphire crystal window. Its window is flat, just like the 98A186’s

Along with its chronograph, there is a tachymeter – and we’re fans of the feature.

It is Japanese quartz. The mechanism inside of it is boasts of a 262 kHz frequency. 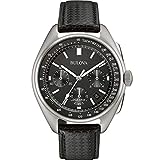 You’re getting a premium leather strap. It feels soft on your hand, and we’re sure it’s from Italy. Unlike the 98A186, it isn’t a black timepiece. Its case is regular silver which doesn’t make it as exciting. Just like the other Lunar Pilot watches, it has high-quality stainless steel on its face.

You’ll see three sub-dials on it. They work its chronograph. They read the milliseconds, seconds and minutes passed. Yes, the pushers on its side work them. They are as “clicky” as in its siblings just discussed.

Its dial is luminous. However, the lume isn’t anything to write home about. The markers it’s on are identical to the 98A186’s – they are rectangular and white. Being against such a dark backdrop, they pop.

The Bulova moonwatch re-edition is water-resistant, but it can’t handle considerable dips. It can only withstand 165 feet (50 meters). Bulova says that it can handle brief immersions and not swimming. This is strange as its counterpart is as resistant and can handle recreational swimming.

There is a Japanese quartz movement inside it. It is ultra-accurate as you get a 262 kHz frequency.

It is a large watch. Its case stretches 1.77 inches (45 mm) across. Its strap is not too wide, though. If you’re wondering what’s on its crystal, it’s sapphire. The glass is completely flat.

We’re glad that it has a history. Getting hold of a watch inspired by a predecessor that was worn to the moon is what anyone would want. Bulova is also a good brand – they produce very high-quality watches. Some of their pieces can even be considered high-end.

They have released reiterations of the original device. Out of the alternatives, they are all very similar. We think 2017’s 98A186 looks the best as its gun-metal body is ultra-chic.

Related Posts
Do Bulova Watches Have Real Diamonds? What Did We Uncover?
Bulova Accutron II Review - Who’s the Snorkel 96B208?
Bulova Precisionist Review – Meet Superb Accuracy!
Bulova Accutron Gemini Review - Craftsmanship on A Budget
Bulova CURV Review - A World’s First
Bulova Marine Star Review - Are They Stars?
Bulova Watch Reviews: High-end Watches You Need In Your Life
Bulova Sea King Review - Do They Rule the Sea?
Author
Thomas Vanderlaan
When Thomas Vanderlaan was a child, the moment he learned about mechanical watches he was hooked. His first love being mechanical watches, he decided to pursue a career in engineering as he was entranced by the science behind its gears. As the years passed, his passion grew. Although he worked a hectic career as an automobile engineer, he’d always collect watches during his spare time.
Affiliate links / Images from Amazon Product Advertising API. Wrist Watch Pro is a participant in the Amazon Services LLC Associates Program, an affiliate advertising program designed to provide a means for website owners to earn advertising fees by advertising and linking to amazon (.com, .co.uk, .ca etc) and any other website that may be affiliated with Amazon Service LLC Associates Program. As an Amazon Associate I earn from qualifying purchases.