Bulova’s CURV line consists of super-accurate timepieces. They’re interestingly the world’s first curved chronographs. There’s a multitude of watches in the collection, so we reviewed one of the most notable – the 98A162. Our Bulova CURV review will be putting it under a microscope while comparing it with its siblings.

Give the below table a good read. We’ve summarized the 98A162’s specs. 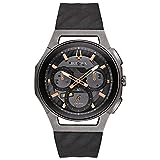 From across the room, your eyes will catch the watch. Its gun-metal and rose-gold colourway are futuristic. The timepiece has a skeleton dial that makes it look rich too. The fact that its strap is rubber also catches your attention – you wouldn’t expect to see it on a device like it.

Not only is its front exposed, but so is its back. Its back has a more in-your-face skeleton rear than its front. It’s quite entertaining to watch its insides at work.

The 98A162 looks like a good-chunk of Bulova’s CURV pieces. Some of them are more classic-like, though. The brand says that the line contains “sports and dress watches”.

It is big. Its case stretches 1.73 inches (44 mm) across. Make note if you have smaller wrists. Big timepieces still fit smaller wrists, but they just look more awkward. Speaking of it fitting your wrist, know that its case is curved to fit snuggly – this is something you see across the line.

There are 2 very interesting pushers on its side. They aren’t there for decoration – they work its chronograph sub-dials. The design of them stays almost the same throughout the collection.

You don’t have to worry about denting its display. Sapphire is on it which is the toughest glass around. The sapphire on it is curved, to go with its case. It is also anti-reflective, so you don’t worry about the sun blinding your eyes.

It doesn’t have any Arabic markers. Instead, you’re met with rectangular blocks. As you can imagine, they aren’t full of lume. But the 98A162’s hands are. The luminous pigment on them is super bright, but we don’t know its name.

Did we talk about its chronographs yet? They are the three sub-dials you see on the bottom. They read the hour, minutes and seconds passed. If you don’t know what chronographs do, they’re stop clocks. As mentioned, watches from the collection host the world’s first curved movement.

Its case is made from quality titanium/stainless steel – it’s hard to scratch. It also makes it look more expensive.

In terms of the buttons that work its chronographs, they work with ample resistance – we loved the way they felt underneath our fingers. Its crown is seriously small. We hate when crowns slam against wrists, which the 98A162’s doesn’t. It’s grooved well, making it easy to turn.

The timepiece can’t handle that much water. It’s only resistant up to 100 feet (30 meters). As it looks great, swimming with it isn’t the first thing that comes to mind.

As you know, its strap is rubber. The material is super water-proof – mud, dirt, and other muck won’t stick to it. Don’t forget that its case is made from stainless steel and titanium too; the part is water-proof as well.

If you’re wondering whether you can go depths deeper than specified, don’t. The watch isn’t sealed to handle more pressure.

The rubber strap on it isn’t thick. This is a relief as having a lot of rubber on your wrist makes you sweat. Attached to its band is a tang-buckle clasp. We think the clasp-type is a pain – you have to pin latches into holes, which might be hard depending on the size of your wrist. Thankfully, you can place a push-button one instead.

We do like the engraving on its clasp, though. It’s Bulova’s symbol and it makes the watch look extra special. Many pieces in the collection wear the marking.

If you want an accurate watch, picking a timepiece from the CURV collection is what you need to do. The 98A162 has the brand’s super accurate 262 kHz quartz mechanism inside it. It provides vibrations that are up to 10x higher than regular quartz. It is Japanese if you’re wondering. The precisionist movement is seen on the brand’s other devices as well – like the Bulova accutron ii.

Now that you know everything about it, let’s take a look at its counterparts. 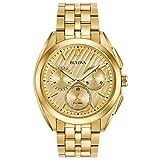 The timepiece is a vision in gold. No, the gold wasn’t brushed on – it is ion-plated with high-quality stainless steel, so the 97A125 can handle a beating.

It is on the larger side. Its case stretches 1.69 inches (43 mm) across. Its metal bracelet isn’t that thick. Similar to rubber, having a lot of steel on your wrist will make you sweat. Know that the device has a push-button deployant clasp. If you didn’t guess it, we’re huge fans of it.

You’re getting a curved case. It is made from titanium/stainless steel. The 97A125 also has three chronographs. They are the sub-dials positioned on the bottom of its dial – they read the hours, minutes and seconds passed. As we mentioned, the shape of its chronograph pushers stays almost the same throughout the collection. This is true for the 97A125.

You’re probably wondering what the glass on its window is. Well, it’s sapphire. As you know, it’s super durable. It is also anti-reflective and curved.

It, unfortunately, doesn’t come with a skeleton dial. We’re sad to say that you don’t get an exposed back either.

It is water-resistant. Like its alternatives, it can handle 100 feet (30 meters) underwater. Since it’s made from stainless steel, it’s pretty water-proof. Bulova says that such resistance is great for occasional splashes but not swimming, snorkeling or diving.

We like the effect on its dial. It’s almost upholstery-like, and it makes the watch look more expensive.

The watch looks different from the 98A162. It has more of a sporty appearance. This is mainly due to its colourway – its chronographs look like some kind of meter. The device is made from stainless steel. As you know, the material is durable and waterproof.

Its chronographs read the hours, minutes and seconds passed. However, their buttons are larger and shaped differently from the 98A162’s. Its crown is still petite, though.

In terms of its water resistance, it can handle 100 feet (30 meters). The most it can withstand is a couple of splashes.

The glass on it is sapphire. It is curved and anti-reflective. It lets you read the time with its rhomboid hour markers. They aren’t full of lume, but its hands are.

It not only doesn’t have a skeleton dial, but its back isn’t exposed either.

The watch is Japanese quartz. The impressive 262 khz movement is inside it. 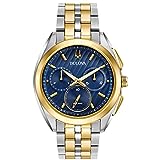 Whether you’re a watch enthusiast or not, you’ve probably heard of the Rolex Daytona before. It’s arguably the watch that put Rolex on the map. Yes, it costs an arm and a leg. The CURV 98A159 looks a lot like it – it’s a homage piece. Considering that it’s not that expensive, this is something you want.

It’s pretty big. It’s larger than the 98A162 as its case is 1.77 inches (45 mm). It rocks a full stainless-steel body. Attached to its strap is a double-press deployant clasp. As you know, the material is very water-proof. The timepiece can handle 100 feet (30 meters) underwater.

Its display is sapphire, just like its brother. Similarly, the glass is curved and comes with anti-reflection. Yes, its case is curved. You are looking at a watch from the CURV collection after all.

There isn’t any lume on its rectangular markers. However, you’re getting ample amounts of it on its hands.

Chronographs are present. Its chronograph sub-dials read the hours, minutes and seconds passed. The pushers that work them look like the 98A162’s. They feel great underneath your fingers.

Unfortunately, you don’t get a skeleton dial. Its case doesn’t rock an exposed back either.

As you’re wondering, it hosts a Japanese quartz movement. The mechanism inside is the super-accurate 262 Khz one we’ve seen time and time again.

Did we mention that the gold on it was ion-plated? There’s silver plated on it as well.

There’s an effect on its dial. It’s identical to the one on the entry above. It’s also a regal blue which makes it one of our favourites.

What do we think about Bulova’s CURVs? We think they’re a line of super good-looking pieces. They’re a pretty big line too – you have a range of watches to choose from. We love that they’re so accurate. Quartz movements are already more reliable than automatic ones due to the fewer parts, so the 262 kHz mechanisms are the cherry on top.

We love that the CURVs come with chronographs too. The feature not only makes watches look more expensive, but they’re handy as they’re stopwatches. Of course, the Bulova curv chronograph is a world’s first!

We chose to review the Bulova CURV 98A162 as it’s probably the most famous timepiece from the collection. We’re in love with its rose-gold and gun-metal colourway. The presence of the Skeleton dial is also nice.

Related Posts
Do Bulova Watches Have Real Diamonds? What Did We Uncover?
Bulova Accutron II Review - Who’s the Snorkel 96B208?
Bulova Precisionist Review – Meet Superb Accuracy!
Bulova Accutron Gemini Review - Craftsmanship on A Budget
Bulova Lunar Pilot Review - A Watch Fit for The Stars?
Bulova Marine Star Review - Are They Stars?
Bulova Watch Reviews: High-end Watches You Need In Your Life
Bulova Sea King Review - Do They Rule the Sea?
Author
Thomas Vanderlaan
When Thomas Vanderlaan was a child, the moment he learned about mechanical watches he was hooked. His first love being mechanical watches, he decided to pursue a career in engineering as he was entranced by the science behind its gears. As the years passed, his passion grew. Although he worked a hectic career as an automobile engineer, he’d always collect watches during his spare time.
Affiliate links / Images from Amazon Product Advertising API. Wrist Watch Pro is a participant in the Amazon Services LLC Associates Program, an affiliate advertising program designed to provide a means for website owners to earn advertising fees by advertising and linking to amazon (.com, .co.uk, .ca etc) and any other website that may be affiliated with Amazon Service LLC Associates Program. As an Amazon Associate I earn from qualifying purchases.