The Best Watches Under $100 - Cheap with Expensive Taste? 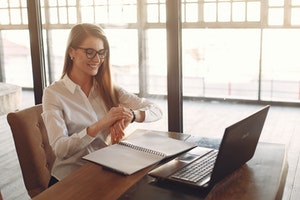 Disclaimer: Some prices may have updated since publishing the post and maybe over the mentioned price limit.

If you’re looking for an amazing watch, you’d think you wouldn’t be able to get it for under $100. This is not true – the number of great affordable pieces is immense. We’ve run through a list of 7, helping you find the best watches under $100.

Instead of diving right in, read through the following table – we summarized some of our most notable picks.

We love the colourway on it. The blue and gold make it look expensive. This is especially true as the gold on it was plated – it’s 18K. You’ll notice that its bezel is on the chunky side. We think this makes it look more unique. What’s great about its bezel is that it rotates – it ticks, helping you time yourself in the pool.

It can handle quite a bit of water. It’s water-resistant up to 330 feet (100 meters). You can snorkel with it, but you can’t dive. The material on its strap is polyurethane – you’re getting stainless steel on its case. The two are very water-proof. This not only means that the Pro-diver will never get wet but all kinds of muck won’t stick to it.

You’re looking at a big watch. Its case stretches 1.96 inches (50 mm) across. We’re not too mad about this, but if you have smaller wrists, it’ll look awkward on you.

There are large pushers on its sides. No, they aren’t ornamental. They work its chronographs. The features are the 3 sub-dials. They read the seconds, minutes and hours passed. Something near its chronographs is a calendar. It’s really small, so you probably won’t notice it. It’s in the 4 o'clock position, so you’ll be straining your neck trying to read it.

Its chronograph buttons feel great against your fingers. However, they along with its crown might slam into your wrist – they are huge after all.

The crystal on its window is flame fusion crystal. It’s a sapphire. It’s one of the toughest crystal types on the market.

If you’re wondering what the movement inside of it is, it’s Japanese quartz. It is reliable as it’s made in a very automated process.

Considering its specs and good-looks, we think it’d make for the best everyday watch – what do you think?

It has a flame fusion crystal.

The watch has a large case. It is 1.96 inches (50 mm). Not only is it a big watch, but it’s very durable. It comes in a full resin body. It’s a deep black, so it looks chic. The presence of resin is great as it’s water-resistant up to 660 feet (200 meters) - the material is super water-proof. Unfortunately, you can’t dive with it.

As it’s a digital watch, it comes with all sorts of features. You’re getting a powerful backlight. There is a multi-functional alarm, 12 as well as 24-hour time and hourly timers. Of course, you get a calendar as well – it’s preprogrammed up to 2099.

We’re not sure what the crystal on its window is. However, Casio’s a fan of mineral. It’s not as tough as sapphire, so don’t get too rough with it.

A lot of Casio’s digital watches are solar-powered. This isn’t the case for the G688. It is regular Japanese quartz.

It is a digital watch

Finally, we’re met with a women’s piece. It’s a vision in gold. The gold on it wasn’t painted on, it was ion plated. It’s 18K, so you’re spoiled. If this wasn’t rich enough, you get crystals on its dial. We don’t know if they’re real or not, but we think they’re cool - when light hits, they turn into disco balls.

As it’s a women’s watch, it’s no surprise that it’s on the smaller side. Its case stretches 1.56 inches (37 mm) across. Its dial, unfortunately, isn’t that big - its bezel takes up a lot of space. If you guessed that it rotates, you’re right. The edges on it help you grip it better. The rotating bezel tells you that it’s quite water-resistant. It can handle 660 feet (200 meters). You can’t dive with it, though – the most it can handle is snorkeling.

Having such a small dial, chronograph sub-dials are not realistic. If it’s any consolation, you get a calendar. But it only reads the date – it’s easy to read as it’s magnified.

When you look closely at the Invicta Angel watch, you’ll realize that you’ve seen its hands before. They’re very much like the Rolex Submariner’s. Considering that the Submariner costs way more, we’re glad about this.

Being so affordable, we’re surprised to see a Swiss quartz movement on it. If you didn’t know, Swiss mechanisms have a lot of craftsmanship going into them.

When you’re deep underwater, you don’t have to worry about the Invicta 14397 falling off your wrist. It has a deployant clasp with an extra safety mechanism.

You’re not looking at a very luminous device. Lume is only on its hands.

It has a Swiss quartz movement

If you’re looking for a homage piece, the MDV106 is great for you. Unlike its sister, it is fully paying tribute to the Submariner. Its colourway and dial are similar.

As it’s paying homage to a dive watch, it’s no surprise that it’s very water-resistant. It can handle 660 feet (200 meters). You can snorkel with it at most – diving is not possible. You’re getting a rotating bezel along with it.

Being made for the seas, a resin strap is by your side. Attached to the band is a tang buckle clasp. If you want a deployant one, you can easily swap it out. Not only is it waterproof, but the material is super durable. This is true for its case too; it’s made from quality stainless steel.

Its hour markers are thick and full of lume. We, unfortunately, don’t know the name of the lume in it, but it’s bright. It’s also on its hands.

The MDV106 has mineral on its dial. As you know, the glass isn’t the strongest, but it can handle a beating.

Did we mention that it’s on the larger side? Its case stretches 1.73 inches (44 mm) across. If you have smaller wrists, it won’t be hard for you to wear. However, it’d look like it ate your wrist up.

There is a calendar present. We’re fond of the feature as it makes watches more functional. That being said, the one on the Casio timepiece is really small. It only reads the date, which we’re not that mad about.

It comes in multiple designs. We’re fans of the brown/black variant as it looks premium yet kind of rustic. It has a leather strap. We’re happy to say that it’s high-quality and feels soft on you. It’s a deep brown, so it exudes luxury as well.

Roman numerals are its hour markers. They help it look more regal. If you look at its center, you’ll see three sub-dials – they are its chronographs. They read the seconds, minutes and hours passed. The buttons on its side work them. When pressed, you’ll get ample resistance.

If you’re looking for a luminous timepiece, you’d be disappointed that the FS5088 doesn’t come with any lume. The pigment isn’t on its hands either.

If you’re looking for a very water-resistant watch, the FS5088 also isn’t for you. It can handle 165 feet (50 meters) underwater. Fossil says that it can handle recreational swimming but not snorkeling or diving. As its strap is leather, getting it wet is not a good move. It’ll take forever to dry. The material is notorious at soaking up a lot of water too.

The glass on its face isn’t that strong. It’s regular mineral.

A Japanese quartz movement is inside of it. We unfortunately don’t know the name of the specific mechanism used. This is true for the majority watches on our list, sadly.

It has a premium leather strap.

Like all the entries so far, the N575 has a case on the larger side. It is 1.73 inches (44 mm). Its dial is pretty wide; you get ample room to read the time. This is important as it’s a pilot’s watch. It has large Arabic numerals on it, this makes it even easier to read. There is also lume on its markers and hands.

Yes, the sub-dials on it are chronographs. They read the milliseconds, seconds and minutes passed. The markers on them are a sharp white while the hands are red – the colours make them pop.

Chronographs work great with tachymeters. Luckily for you, the Astroavia comes with one. The two help you calculate the speed and distance between two points. For a pilot, such a thing is useful.

Its body is made from stainless steel. It’s pretty high-quality. Attached to its strap is a secure clasp. It’s the double-locking fold-over deployant type. There are 2 pushers on its side. As you know by now, they work its chronograph.

There is a calendar on it as well. It’s in the 3 o'clock position. It’s small but is bolded well. Yes, it only reads the date.

A Japanese quartz movement is inside of it. For once, we know the name of the specific movement used. It is VD57. It’s super accurate.

The N57S is water-resistant. However, it can’t handle considerable depths. It’s only resistant up to 100 feet (30 meters).

You’re probably wondering what glass is on its window – once again, it’s mineral.

You’re looking at the largest timepiece on our list. Its case comes in at 2 inches (51 mm). If you have smaller wrists, definitely make note. Considering that the device is so affordable, we’re surprised by how soft its leather is.

There are rectangular markers full of lume. The pigment is on its hands too. You’ll find the seconds easy to read as there’s a super sharp orange hand. It contrasts sharply against the pale blue dial.

You guessed it right, the sub-dials on it are chronographs. They read the seconds, minutes and hours passed. Its pushers feel great underneath your fingers – what more could you want?

The crystal on its dial is mineral – you’re more than familiar with the material.

The DZ4458 is water-resistant. It’s one of the few watches we reviewed that can handle 330 feet (100 m). Diesel says that you can snorkel with it at most. The thing is, it has a leather strap. Hopefully, you remember how bad of an idea it is to get the leather wet.

It rocks a Japanese quartz movement.

You probably won’t notice its calendar; we know we didn’t. It’s in the 3 o'clock angle, and it’s seriously distorted. It’s quite small too.

The best affordable watches under $100 can easily be found. Many people think finding timepieces for a specific budget, especially lower ones don’t end well – as you saw from our article, this isn’t the case. The Invicta Pro Diver deserved our number 1 spot as not only does it look great but it’s also super durable– it’s easily the best everyday watch under $100. Invicta snagged another spot with the Angel, so it knows what it’s doing.

Our Casio in number 2 was great. It’s more durable than the Pro Diver as it rocks a full resin body. However, its looks aren’t very appealing. We love that it’s a digital watch, though.

The other entries were all neck-in-neck with each other. We think you can’t make a wrong choice with any of the above 7.