What’s the Best Orient Watch? 7 Timepieces Made with Style

Japan is home to some of the best watch companies in the world. One of their best is Orient. It’s overshadowed by Citizen and Seiko but still packs a punch. We’ve helped you find the best Orient watch, and given you an in-depth look at the brand.

Although owned by Seiko, Orient was once an independent company. It entered the industry in 1950. That same year, it produced the world-famous Orient Star watches.

Ever since Orient started, its goal was to produce high-quality, affordable pieces. As you’ll see in our review, it certainly delivered. One of the ways it does this is by making its movements in-house - know that many of its competitors don’t do this.

You’ll find a few of our most note-worthy picks summarized:

The watch isn’t that big. Its case is only 1.63 inches (41.5 mm). It doesn’t have a wide strap either. It’s made from quality stainless steel, which is why it’s so shiny.

It has a black, blue and silver colourway. We think the combination looks good. Its dial is especially eye-catching as there’s a sunburst effect.

The timepiece has hour markers full of lume. There are many luminous pigments out there, but we don’t know the name of the one used. The RAY II can handle considerable depths underwater. This is why its luminous dial is so useful.

You’re probably wondering how much water it can handle. Well, its resistance rating is 660 feet (200 meters). The thing is, it’s not ISO 6425 certified so don’t dive with it.

The Ray II is an automatic device. It comes with the F6922 mechanism. It has a 40-hour power reserve and 22 jewels between its gears. Its power reserve isn’t impressive, but the fact that it has 22 jewels is. Its jewels are not real – they’re pieces of glass. The more present, the more accurate an automatic watch will be.

The device doesn’t have a fancy window. It’s made out of mineral. The crystal isn’t the toughest, so don’t get too rough with it.

Being an automatic watch, we would’ve loved if its back was exposed.

The timepiece comes with a case that’s slightly bigger than the entry above’s. It also has a different colourway. We’re fans of its blue, rose-gold and silver design.

It has triangular and rhomboid markers on is dial. Just like the Ray II, they’re full of luminous pigment.

Orient is a fan of high-quality stainless steel, which is why the Ray III is so scratch resistant. The watch has a considerable water resistance rating. This is great as stainless steel is quite water-proof. The device is resistant up to 660 feet (200 meters) underwater. It unfortunately isn’t ISO 6425 certified.

It has a tough display. You’re looking at a sapphire window. It’s much more durable than mineral.

You’re looking at an automatic watch. The Orient timepiece has the F6922 mechanism. You already met it in its brother above – in case you forgot, you’re getting a 40-hour power reserve and 22 jewels between gears. Something we like about the movement is that you get self-winding and hacking.

We’re disappointed that the Ray III doesn’t come with an exposed back either.

The Mako XL is on the larger side. Its case is almost 1.73 inches (44 mm). If you have smaller wrists, it’ll swallow you up. Its strap is kind of wide too.

The timepiece looks like the Ray II. They both have black, silver, and blue colourways. Its blue dial especially looks like its counterpart’s as it also has a metallic effect.

The watch has a good water resistance rating. However, you can’t dive with it – it isn’t ISO certified. It is resistant up to 660 feet (200 meters) underwater. Its dial is full of luminous pigment, so reading it when submerged won’t be an issue.

It doesn’t have a premium window. You’re getting regular mineral.

Yes, the Mako XL is automatic. It rocks the Orient Caliber 46943 movement. It results in 21 jewels between gears and a 40-hour power reserve. You don’t get self-winding or hacking. The two have become very popular in the industry, so we’re disappointed.

The Mako XL is another automatic watch that doesn’t come with an exposed back. We would’ve loved it if this was present.

If you’re not a fan of the blue, black and silver colourway, know that the timepiece comes in several designs.

The monarch is a regal-looking dress watch. It looks like a pocket watch with straps added on. This is mainly due to its large face and gold casing. There are Arabic numerals to read the hours passed. They’re pocket watch-like too.

As it’s a dress watch, it’s no surprise that it doesn’t have a stainless-steel bracelet. You’re getting a leather strap. The leather feels very premium but gets wet easily and will take a long time to dry. We have no idea what type of leather Orient used, but it feels rich.

However, the device is water-resistant. It can handle 165 feet (50 meters) underwater. Considering what we said about getting it wet, stay away from the pool.

The Monarch is an Orient mechanical watch. We’re glad to finally see an exposed rear. It has the Orient caliber 48C40 movement inside of it. You’re getting a 40-hour power reserve.

There is a mineral window. The thing about its crystal is – it’s curved. This not only makes it more impact resistant, but more premium looking. Curved displays are widely seen in Swiss pieces.

The device looks pristine. Its silver body has a pearl finish to it. This is especially true for its dial. You don’t have to look too close to notice gems on it. No, they’re not precious – they’re made out of quartz. You might blind yourself with them, though. Imagine how reflective they’ll be on a sunny day!

The timepiece can’t handle that much water. It’s only resistant up to 165 feet (50 meters). The device is a dress watch, so this is fine. Yes, it’s automatic. The Charlene comes with the Orient caliber 55741 movement. It results in 21 jewels between its gears and a 40-hour power reserve. Unfortunately, you can’t wind or hack it.

Its dial has a mineral window. It’s curved, just like the entry above’s. Not only does it make it look more premium, but makes it more resistant.

We’re glad that the timepiece comes with an exposed rear – watching its gear move is a great way to pass time. 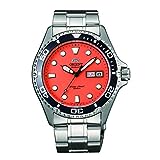 The Raven is a variant of the standard Ray II. Design-wise, it’s more good-looking as it comes with a neon dial. The neon orange looks good against the watch’s black bezel. There are rhomboid markers throughout its display. They’re large and white, providing more of a contrast. Yes, they’re full of lume.

The luminous pigment is on is hands too. They aren’t white, but a subtle pink. Overall, Orient did a good job with its colourway.

The timepiece can handle quite the dip in the pool. It’s resistant up to 660 feet (200 meters). Just like the standard Ray II, you can’t dive with it. The Raven is not ISO 6425 certified.

It is an automatic device. The same mechanism in its counterpart is present. We would’ve loved if Orient placed an exposed back, but you don’t always get what you want.

There’s a mineral window on its dial. No, it isn’t curved.

Compared to the regular Ray II, the Raven is a bit larger. It also is heavier. This makes it feel more premium.

The watch is eye-catching. If the monarch wasn’t around, we’d dub it the best looking. This is mainly due to its dark blue colourway – it looks really expensive. Its Roman numerals help with the feel. However, they aren’t the easiest to read.

The device doesn’t come with any lume on its display. It doesn’t have any pigment on its hands either.

There is a calendar, but it’s in the form of a sub-dial. If you look close, you’ll see a date wheel as well. If you’re wondering what the dial on the left is, it’s the timepiece’s sun and moon indicator. It does exactly what you think it does.

As it looks premium, it’s no surprise that its crystal type is sapphire.

The watch is one of the larger ones on our list. Its case stretches 1.65 inches (42 mm) across. It’s pretty shiny, which is due to its high-quality.

Yes, there is leather on its strap. We don’t know the type of leather used, but its embossing makes it look like alligator-skin. If you remember, leather is really bad at being water-proof.

We’re topping our review off with another automatic watch. It comes with the F6B24 mechanism. This means you get a 40-hour power reserve and 22 jewels between its gears. The device can be hacked and self-wound.

We’re extra glad that its display is exposed.

Orient knows what they’re doing. Let’s answer some questions you may have about them.

Where Are Orient Watches Made?

The watch company makes their pieces in Japan. We don’t know the specifics, but their pieces are manufactured in Japan and are assembled in Hong Kong. Their more expensive watches are made entirely in the nation.

The watchmaker is one of the biggest in Japan. Watch enthusiasts love companies that make their own mechanisms – which Orient does. Many regard Orient’s dress watches as the most affordable in the game. This is mainly due to the Orient Bambino line.

They’re really good. As the company produces its own movements, the quality of their watches is high. Their more expensive timepieces are exquisite.

What Kind of Watches Do They Produce?

The company makes anything and everything. Between quartz, mechanical and automatic watches, you’ll see them all.

This brand produces some really good-looking watches. We’re fans of the quality of its devices too – it’s great that their movements are made in-house. Although Orient is not as famous as Seiko or Citizen, it gives them a run for their money.

Related Posts
Affordable And Good Looking, Who Is The Orient Bambino? (Your Must-Have Review)
Orient Mako II - Just Another Tribute Piece?
Orient Triton Review - Did We Find The King of The Sea?
Author
Thomas Vanderlaan
When Thomas Vanderlaan was a child, the moment he learned about mechanical watches he was hooked. His first love being mechanical watches, he decided to pursue a career in engineering as he was entranced by the science behind its gears. As the years passed, his passion grew. Although he worked a hectic career as an automobile engineer, he’d always collect watches during his spare time.
Affiliate links / Images from Amazon Product Advertising API. Wrist Watch Pro is a participant in the Amazon Services LLC Associates Program, an affiliate advertising program designed to provide a means for website owners to earn advertising fees by advertising and linking to amazon (.com, .co.uk, .ca etc) and any other website that may be affiliated with Amazon Service LLC Associates Program. As an Amazon Associate I earn from qualifying purchases.