G-shocks are so durable that even the military uses them. We ran through 6 watches to help you find the best g-shock watch. We also put the brand under a microscope.

We’ve summarized the most notable entries on our list in the following table.

The Best for Small Wrists 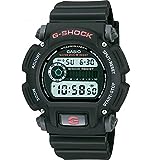 We’re fans of the Mudmaster’s appearance. The device is huge. Its case stretches 2.20 inches (56.1 mm) across – G-shock is known for its large watches. The texturing on its strap looks like Nylon, but it’s resin. The material is waterproof. This is great as the watch can handle 660 feet (200 meters) underwater.

It is very durable. Casio made the GWG-1000 vibration resistant. It also comes with a range of features. You have an altimeter and thermometer by your side. When taking temperature readings, you’ll enjoy how thorough its scale is – it’ll read temperatures between -10 and 60 C. It comes with a stopwatch. It reads the time in 29 different time-zones as well.

Sunlight powers its Japanese quartz movement. To ensure you always have accurate time, multi-band atomic timekeeping is in place. It connects via radio waves to atomic clocks.

The crystal on its front is sapphire, which is the toughest out there.

It’s called the mud master for a reason. There are gaskets in the pipes within its buttons. They keep mud at bay. They also help it be vibration resistant. The gaskets help its buttons be more responsive too.

It has a mineral window. The crystal can handle a beating but it’s not indestructible. As there is thick resin all over its body, so worrying about scratching its display won’t be an issue.

Like all G-Shocks on the market, it is solar-powered. The company says that any light source charges it. Sunlight charges its circuit as it’s Japanese quartz.

It can handle a 660-foot (200 meter) dip underwater. As it’s made from resin, it’s very waterproof. It’s also sealed up well, never letting liquids inside.

There are many features inside of it – you’re getting 5 alarms, an altimeter, and barometer, a thermometer as well as a digital compass, and the time in different time-zones.

One of our favourite things about it is its atomic timekeeping.

Design-wise, the Casio Rangeman doesn’t look that stunning. It follows the template G-shock uses in many of its devices. The timepiece is one of the most popular g-shocks around.

The presence of a barometer.

Like the GWG-1000-1A3, the GG-1000 is from the mud-master line. This results in it having gaskets within its buttons. As you know, they help its buttons be more responsive too.

The watch can handle as much water as its brothers already discussed. If you remember, resin is very waterproof. This makes it great for the outdoors. Mud and dirt won’t stick to it.

The GG-1000 is Japanese quartz. It is solar-powered. Various light sources power it. G-Shock unfortunately didn’t include atomic time-keeping.

It comes with regular mineral glass. It can handle a beating, but it’s not the strongest. There is thick resin around it. You won’t damage it easily.

Something great about the timepiece is that it’s ISO 764 certified – it’s magnet resistant. Magnets affect how accurate a watch can be. This thankfully won’t be an issue you’ll face.

Being a G-Shock, it’s not a surprise that it has many features. It can take temperature readings between -10 to 60 c. It also tells you the time in 31 different time-zones. You get 5 daily alarms and a 1/100 second stopwatch as well.

Just like our top pick, it looks like its strap is made from nylon – it’s just the texturing on it.

It is ISO 764 certified – its accuracy won’t be affected by magnetic fields.

The Best for Small Wrists

The timepiece is retro. It’s still durable, though - it’s made entirely from resin. It looks retro due to its shape – you don’t see watches with rectangular cases anymore. The design of the numbers on its display does the trick too.

The DW5600 is another entry that’s small for a regular G-shock. Its case is only 1.77 inches (45 mm). The resin on it is noticeably soft. This makes it a dream to have on. However, as it’s soft, it’s not as durable as its siblings.

It is solar-powered. The thick black band around its dial is its solar panel. Yes, it is Japanese quartz. The quartz movements G-shock uses are known to be accurate.

You’re looking at a water-resistant device. The DW5600E-1V can withstand up to 660 feet (200 meters). As it’s made entirely from resin, you know how waterproof it is. The glass on its window is mineral – you need no introduction.

Of course, it comes with great features. You can expect a multi-function alarm, a 1/100 second stopwatch, and a timer.

We think the timepiece is the easiest to read – its dial doesn’t have much clutter. When compared with the other entries on our list, you’ll see what we’re talking about. 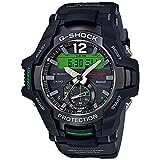 The timepiece was made for the skies – that’s why it’s called the Gravity Master. It comes with a wide dial that helps you read the time in a cockpit. The LCD on it is bright, making things easier.  Its buttons are simple and easy to reach. This is as pilots can’t waste time trying to figure a watch out.

Its buttons work all kinds of features. There is a 1/100 second stopwatch, multi-function calendar, timer, backlight, and a fully programmed calendar. You can set the time for multiple time zones. When daylight saving time hits, the time zones you’ve set would automatically adjust.

Many pilots watches have airplanes or flying motifs – this is true for the Gravity Master. Not only is the watch a breeze to use in a cockpit, but it looks like one too.

No surprise, it is solar-powered. Solar energy will be charging its Japanese quartz movement. Yes, all sorts of light sources charge it.

The crystal on its front is mineral.

The DW9052-V comes in at 1.90 inches (48.5 mm). It rocks a full resin body, just like its counterparts. It has a mineral window. Its tough resin body keeps it safe. You already know how waterproof and shock-resistant the material is.

Its face isn’t the most glamorous. We think the DW9052 is the entry that looks the least impressive. We especially aren’t fans of its display – it looks cloudy. There’s a ‘G’ on its strap. We don’t like it as it makes the timepiece look tacky. Then again, it isn’t that expensive, so we’re not too mad.

Like all the entries we ran through, you’re looking at a water-resistant device. It can handle 660 feet (200 meters) in a pool. It is also solar-powered. G-shock makes watches for the outdoors, so this makes the most sense.

It comes with useful features. You get a daily alarm, timer, auto-calendar, and 1/100 second stopwatch. Unfortunately, it doesn’t come with atomic timekeeping. If it did, it might’ve ranked higher on our list.

Did we mention that it has a great backlight? All the watches we reviewed come with one. The brand knows how to nail electroluminescence as its backlights are superb.

Now that you know which G-Shocks are worth your time, let’s answer a couple of questions you may have about the brand.

Where Are G-Shocks Made?

The brand produces its most expensive pieces in Japan. A lot of its devices are made in China, however, and the company is trying to move manufacturing to Thailand.

How Durable Are G-Shocks?

From our list, you would’ve noticed how resistant G-shock’s watches are. The G-shock is so good at what it does that some of its watches are NASA certified. We discussed one – the DW-56000-E.

Are They Worn by The Armed Forces?

Of course! Some of the US’s top navy seals have been seen wearing watches from the brand. Most notably, Marcus Luttrell and Jared Ogden.

How Big Is the Company?

Casio’s G-shocks are ever-expanding. As of now, there are over 3000 models in its collections. The watchmaker is coming up with new and modern ways to change up its pieces all the time.

Are G-Shocks Worth the Purchase?

Think of purchasing a G-shock as an investment. No matter how expensive it is, you’ll be able to wear it for the rest of your life. Remember that the brand produces durable pieces that even NASA has approved.

What did you think about our g shock watch review? They’re amazing timepieces. Not only are they super durable, but they’re stylish too. We’re glad that the brand produces so many watches – there is quite a selection to choose from.

From our list, it’s obvious that the GWG-1000-1A3 deserved the number one spot. Not only is it the most durable, but it looks the best too. Let’s not forget that its price tag isn’t too bad either. The Rangeman gave it a run for its money, but we don’t think it delivered as well. The other devices we reviewed didn’t put up much competition either.

Related Posts
Casio MTP4500D-1AV Tough Chronograph Watch Review: Revamped for the Modern Timekeeper
GSHOCK RANGEMAN REVIEW - THE BEST G-SHOCK?
Casio Gw M5610: A Feature-Packed Gem In A Classic Design
Casio Duro Mdv106 - An Outstanding Watch At An Astounding Price
Author
Thomas Vanderlaan
When Thomas Vanderlaan was a child, the moment he learned about mechanical watches he was hooked. His first love being mechanical watches, he decided to pursue a career in engineering as he was entranced by the science behind its gears. As the years passed, his passion grew. Although he worked a hectic career as an automobile engineer, he’d always collect watches during his spare time.
Affiliate links / Images from Amazon Product Advertising API. Wrist Watch Pro is a participant in the Amazon Services LLC Associates Program, an affiliate advertising program designed to provide a means for website owners to earn advertising fees by advertising and linking to amazon (.com, .co.uk, .ca etc) and any other website that may be affiliated with Amazon Service LLC Associates Program. As an Amazon Associate I earn from qualifying purchases.